“How much is that thing?” was consistently the first question onlookers would ask during my time testing the newly revised 2020 Alienware m17 gaming laptop. It looks expensive, and it is, in fact, expensive. But, as the saying goes, “you get what you pay for.”

The answer to that first question, by the way, is an eye-watering $3,329.99 as tested. But what that significant pile of cash gets you is a super computer in laptop form. The Alienware m17 is a premium device that makes a mockery of most people’s full-size desktops, and it’s perfectly fitted into a chassis that’s barely 0.6 inches thick.

With an NVIDIA RTX 2080 Super at its core, the new m17 is a powerhouse for gamers and even an uncompromising desktop replacement for professionals with a need for big rendering performance in a portable form factor. Should you buy it? Absolutely. The real question, though, is can you buy it?

Desktop-Class Performance that Fits in Your Backpack

Yes, it’s a beast, scoring over 9200 points in 3DMark’s Time Spy CPU benchmark. These benchmarks don’t always accurately represent real-world performance, but to give you some idea, this CPU comfortably outperformed my gaming desktop, which packs a liquid-cooled Core i7 8700K (a favorite among gamers) overclocked to 5GHz on all cores.

But the real star of this show is the graphics card — a fire-breathing NVIDIA RTX 2080 Super. And this isn’t some cutback Max-Q version either; it’s a full-sized, full-powered 2080 Super with 8GB of GDDR6 RAM.

This is one serious graphics card. It’s capable of outputting games at very high resolutions, and able to render advanced graphics techniques like ray tracing, while maintaining smooth frame rates. Again, in 3DMark Time Spy, this GPU scores over 9900, falling only slightly short of my full-size RTX 2080 desktop card. In short, this thin laptop stacks up comparatively to my custom-built high-end gaming rig, and that’s remarkable.

What’s interesting about the spec of this laptop, though, is that Alienware has paired all of this power with a 1080p display. All of the other specs might sound like overkill for such a modest resolution. But when you throw in the insane 300Hz refresh rate into the mix, you get a clearer picture of what this laptop is about: ultra-high frame rate gaming.

Destiny 2, for example, absolutely flies. With all settings on Ultra, it’s not uncommon to see frame rates in excess of 140fps. The Hitman 2 – Miami benchmark (which adequately represents real gaming performance), dialed all the way up to max settings, soars to 130fps at moments. It only drops to a still-amazing 80fps when the action is at its most chaotic (and settles on a 98fps average).

Even with ray tracing turned on, frame rates remain stable. Battlefield V cranks out a smooth 70fps with Ultra graphics settings and ray tracing set to high. This scenario would cripple the vast majority of gaming PCs out there considering that the GTX 1060 and RTX 2060 are among the most popular GPUs today. But this half-inch laptop cruises through it without issue.

This laptop is for serious competitive gamers, who often trade visual splendor for performance and will benefit most from the silky smooth experience that only a 300Hz display can deliver. For most people, it gets hard to tell the difference at anything more than 144Hz. But the fact is, more frames means more visual information and a quicker input response. And that is most important to people who play online games competitively.

If you ever do connect the m17 to a 4K monitor via its HDMI or Mini DisplayPort video outputs, you can expect it to handle the huge boost in resolution quite comfortably at 60fps on high settings for most modern games.

You can find cheaper laptops with an RTX 2080 Super in them, but they probably won’t have the components to match the rest of this laptop’s ridiculous specs list.

While most PCs get along fine with 16GBs of RAM, this laptop packs 32GBs, which will keep you cranking through absolutely any game you throw at it — even the memory hog that is Microsoft Flight Simulator 2020.

For its main hard drive, Alienware has slapped in two M.2 SSDs paired in a RAID 0 array, which means both drives operate as a single disk delivering almost double the load speeds of an already-fast M.2 drive. Windows 10 boots up in seconds, and games load faster than on any PC I’ve ever used. Oh, and it has a third M.2 drive for extra storage, just in case.

Cooling is also super high-spec. The 2020 m17 has a new vapor chamber cooling solution and a beefier copper heat pipe array that more comprehensively covers all of the laptop’s hot bits. Two high voltage fans pull in air via massive downfacing intakes, and eject the heat through exhausts on the rear and sides of the chassis.

At full-speed, the fans obviously make quite a racket. But the m17 does a good job of keeping temps under control without maxing out its fans.

To aid further in cooling and performance, Alienware boasts about its new “HyperEfficient Voltage Regulation” hardware. This uses an increased number of power phases to supply just the right amount of juice to the processors, while minimizing excess heat.

The result is a keyboard surface that stays relatively comfortable, even during extended gaming sessions. This addresses the common complaint that the “WASD” keys get too hot on high-end gaming laptops.

And if that wasn’t enough for your money, I maintain that Alienware’s newest design language — a sleek-ly styled casing with tasteful lighting and a premium alloy-metal finish — is absolutely the best in the company’s history. This thing is stunning from every angle, and gets attention from gamers and non-gamers alike.

Sadly, there’s nothing premium about the battery life. But with this laptop’s performance, expecting much more than three or four hours of light use (and much less for intensive tasks) is wishful thinking.

One for the Customizers 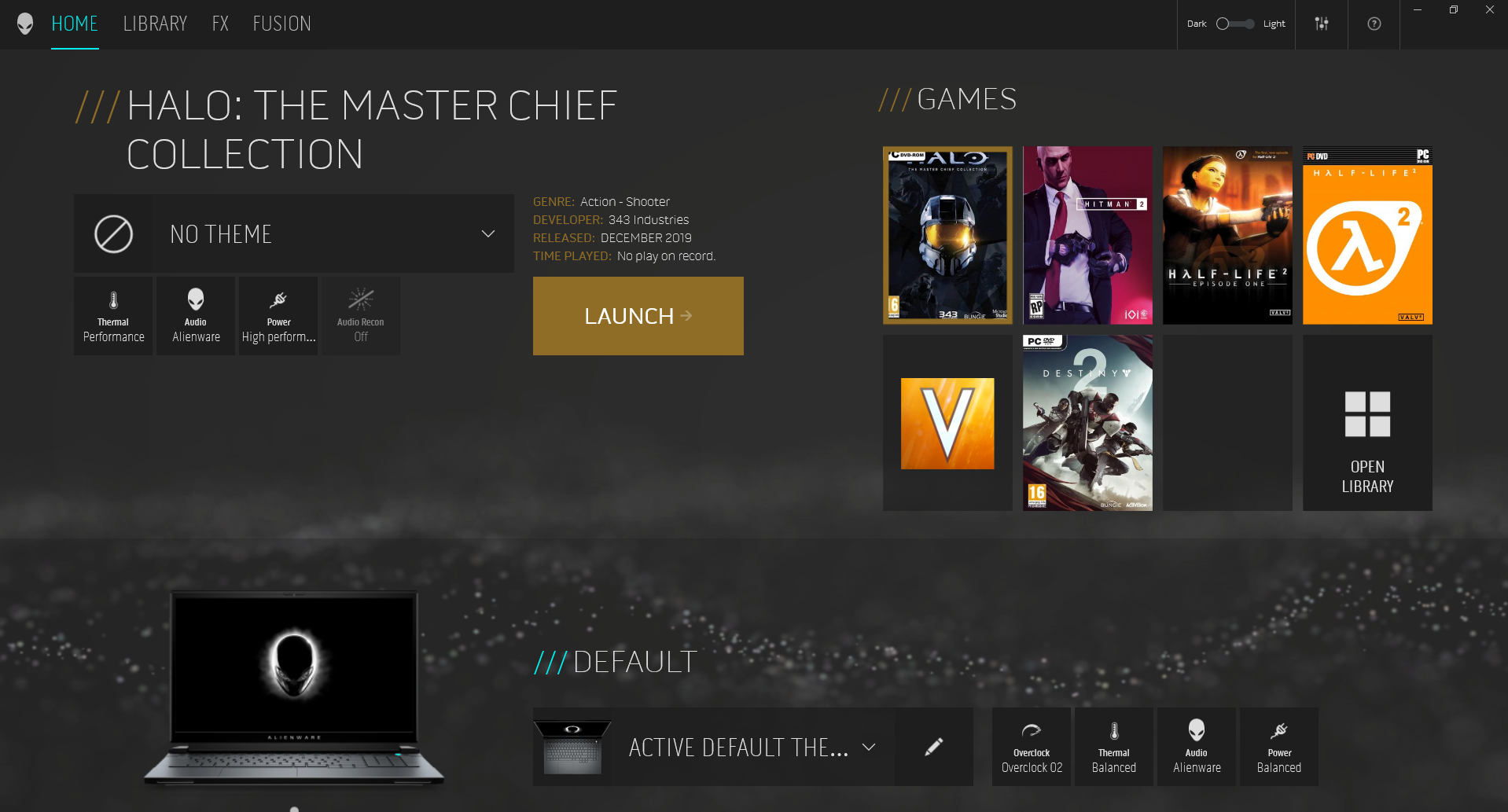 As is the norm for Alienware computers, the m17 comes equipped with the Alienware Command Center software suite, which lets you customize the laptop to your heart’s content.

On the performance side, both GPU and CPU overclocking profiles can be created and activated. You can pump up voltages and clock speeds to squeeze just a little more performance from these chips — should you really feel you need it.

This inevitably creates more heat, so you can also choose from pre-set fan profiles or create custom fan curves to match the occasion.

Meanwhile, the AlienFX lighting that adorns the keyboard, power button, chassis lid and rear exhaust vents can be customized with full RGB color options for each zone.

Finally, the Alienware Command Center has the ability to define game-specific hardware settings. This lets you set overclocking, fan control and lighting profiles that automatically activate on a per-game basis. This is excellent if, for example, you want it to crank along at full steam when playing a competitive shooter like Call of Duty: Warzone, but relax down a little for a more chill session of Fall Guys.

Should You Buy the Alienware m17?

There’s no question that this is one stunning piece of machinery. It’s expensive, but that hefty price tag gets you access to an absolute beast-of-a-gaming-device that succeeds in delivering some of the best performance possible in any laptop today.

If you want a no-holds-barred gaming laptop, this is as premium as it gets. It is undoubtedly one of Alienware’s best laptops to date.

There is, however, one thing to consider. NVIDIA recently revealed its new 30-series RTX graphics cards, which are said to boast some of the biggest generational performance leaps in GPU history. That’s a big deal, and they arrive for desktop PCs in September 2020.

There’s never a “perfect” time to buy when it comes to fast-evolving tech, but if you’re not in a huge rush to buy a gaming laptop right now, I’d advise you to hold fire for those inevitable 30-series machines. It will take some time for these beastly GPUs to make their way to the laptop market, but when they do, you can expect those laptops to significantly outperform 20-series rigs.

Before you buy, set a Deal Alert to be notified of any future discounts or coupon codes. You can also visit our Alienware Coupon page for all of the current deals and offers. 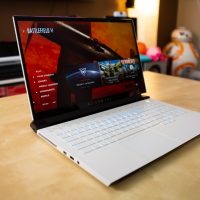 Buy Now at Dell
Any product or service prices/offers that appear in this article are accurate at time of publish, and are subject to change without notice. Please verify the actual selling price and offer details on the merchant's site before making a purchase.
Facebook Twitter Reddit Share via Email