Though all sorts of people enjoy video games, when it comes to hardware, there are really only two types of gamers out there: the power gamer and the casual gamer. The first type loves pushing their gaming rig to the outer boundaries of its limitations via the newest AAA blockbuster games. They seek out premium-priced equipment and the flashiest of peripherals.

The casual gamer, however, isn’t as concerned with the viable arms race that is gaming rig building.  They usually have long-term relationships with a few games they absolutely love, and in terms of gaming gear, their machines don’t need to be top of the line. As long as they can still have a good time, they don’t feel pressured to constantly upgrade their systems.

A Fair Power to Price Ratio 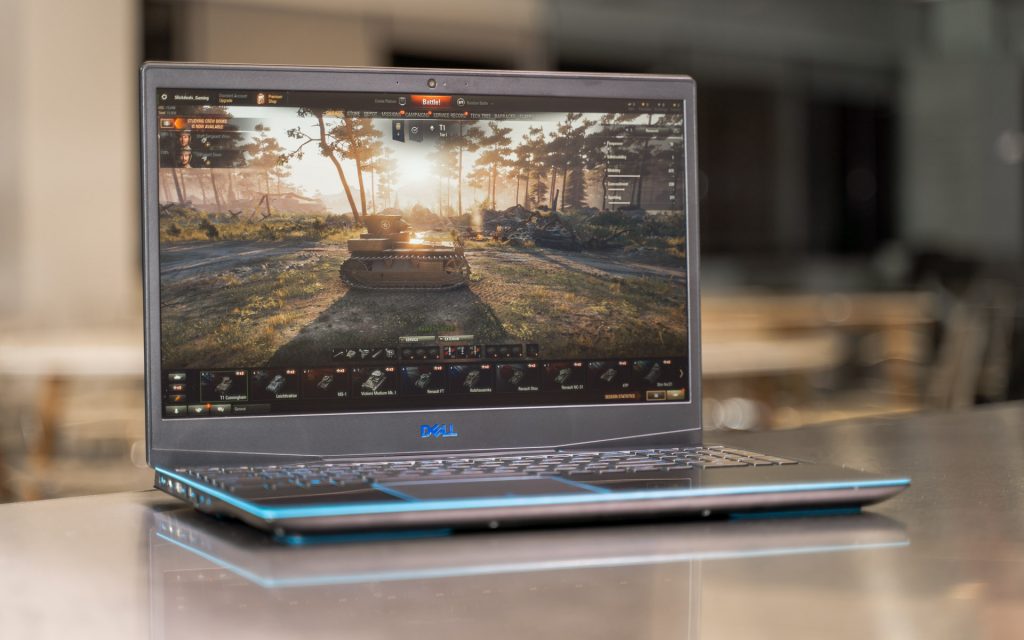 At a current starting price of $799, the new G3 15 gaming laptop is a little on the expensive side compared to its peers. Budget-conscious casual gamers typically look for a price point of around $600. The G3 may well be worth the money, but it’s still something to consider if your primary concern involves finding the least expensive gaming PC possible.

The laptop comes with a decently powerful 9th Gen. Intel Core i5 processor, and is paired with a mid-tier Class 2 NVIDIA GeForce GTX 1650 GPU. This graphics card performs a few notches better than the GTX 1050 Ti, which is still a very viable graphics processor for today’s games.

Though the 128GB SSD is kind of small, having one is still a luxury, and you can enjoy the fast boot-up times for which it’s known. The G3 also includes a 1TB hard drive, which will likely be your main storage location for games and other files. As for the RAM, 8GB is plenty for pretty much all indie games or popular eSports titles.

If Looks Could Kill 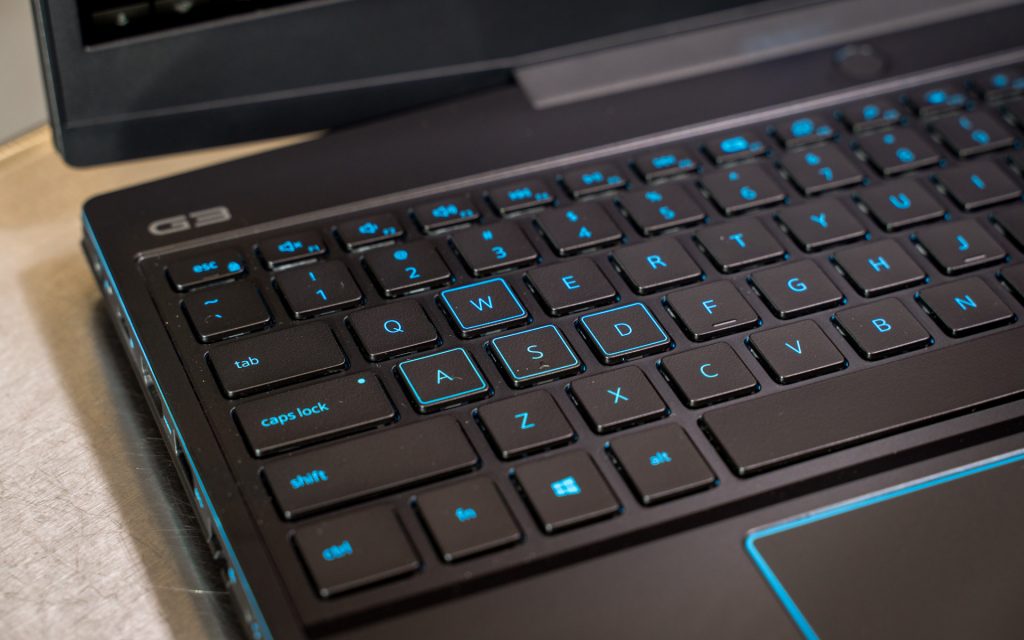 Right out the box, Dell’s G3 gaming laptop is just stunning. Though the chassis is plastic, the black grain texture with blue accents gives the device an upscale feel. While many manufacturers try to hide fan vents, Dell cleverly planted them at the back of the laptop, giving it a muscle car-like look.

Once you open the laptop, you’re greeted by a soothing, minimalist layout. The keyboard is backlit with a cool blue to match Dell’s signature colors, and keys light up on touch. Dell also added some nice cosmetic flourishes by placing a border around the most important keys to a PC gamer: w-a-s-d.

While the brick on the charger is a bit bulky, the charging cable is extra aesthetic with a glowing blue ring. Not only is it a nice-looking feature, but it’s also a helpful indicator of when your laptop is charging.

Muscle for the Hustle 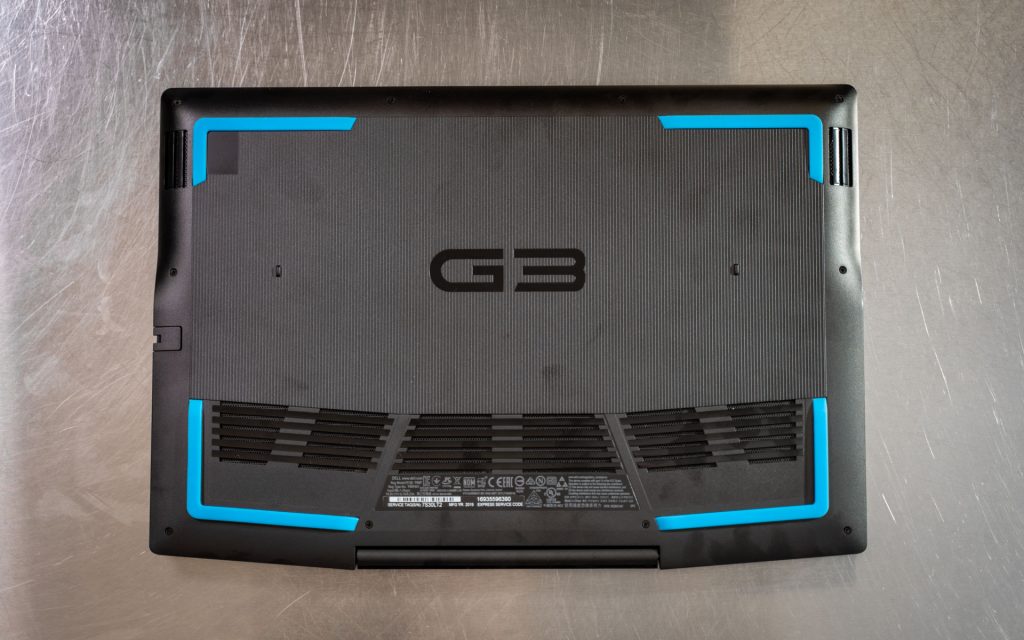 Having made an oath to use my gaming current laptop until its death, I was more than ecstatic to try out the Dell G3. Just to give you an idea of my laptop’s age, the GeForce GTX only has three digits and doesn’t start with a 9 either. Despite its limitations, it still gets the job done; I have always thought of myself as a casual gamer, and really just enjoy games like League of Legends, World of Warcraft and older first-person shooters.

With Dell’s 15-inch G3 in-hand, I wanted to test out a few of my favorite games to see what kind of graphical boost I’d been missing out on. Since I tend to stick to medium/low settings on my home machine, the jump in video quality was pretty phenomenal. Seriously, this must have been how people felt when they saw color television for the first time. The G3 gaming laptop handled WoW in the highest settings without skipping a frame, and always maintained a steady 100 FPS.

Since I was blown away by the G3’s treatment of older games, I had to put the laptop to the test. Luckily, the critically acclaimed Destiny 2 recently became free on Steam and was the perfect subject for experimentation. Even with high demand in the graphics department, the G3 could hold its own playing the game. As for me, not so much. But nonetheless, it was an extremely enjoyable experience and Dell’s starter gaming laptop definitely passed the test.

The G3’s fans are also pretty noteworthy. The laptop is virtually silent when you use it to browse or watch Netflix. On top of that, the fans’ placement prevents excess heat from being passed onto your legs. With my old laptop, long gaming sessions can literally start to feel like fire because the main fan sits right under the left part of the keyboard. But after playing Destiny 2 for a couple hours on the G3, I didn’t notice any discomfort from heat.

Once you start getting into some more graphic intensive uses (like games), the G3’s fans start to roar like a Hellcat. Luckily, the speakers are relatively great, so they can drown out a lot of the fan noise. And if you are gaming with a headset, it’s not an issue at all. When it comes to budget gaming laptops, there are always trade-offs. The G3’s design, build quality and hardware really fit the bill, but the screen definitely could stand some improvements.

While the NVIDIA GPU can pump out some nice graphics, the display just doesn’t do it justice. The new G3’s color depth is a bit behind its peers so, the images just aren’t that vivid. Upon first use, you may try to up the brightness because the G3 seems a little dim. But to your dismay, the brightness is already capped out.

Interestingly enough, the lack of a vibrant display does have one serious silver lining. The new G3 laptop’s battery life can last almost two hours longer than its competitors under normal use.

I was also a little disappointed by the lack of a touch screen. While it isn’t super conducive to gaming, using your display like a tablet is quite handy for work. With 8 gigs of RAM and a decent i5, the laptop can also double as a productivity machine. However, with the lack of touch, making presentations just doesn’t feel as seamless as it could be. .

Is the Dell G3 15 Gaming Laptop Worth It? While it isn’t the most powerful laptop money can buy, the G3 is a superb gaming machine for budget-conscious or occasional PC gamers. The power to price ratio is a good balance and it is all around a well-configured machine. While you may just enjoy a few MMOs or MOBAs, the new Dell G3 gives you the power to branch out. And who knows, it could also be your gateway into power gaming.

If you are looking for more muscle, Dell also offers many tiers and customizations of this laptop. With Black Friday soon under way, we may even see some decent deals for this budget gaming device. Either way, the new Dell G3 15 will hardly disappoint you.

If you have an interest in other products by Dell, you can always make a visit to their Slickdeals store page. But if you are keeping an eye out for a specific device, set up a Deal Alert to get notifications of its next sale.