Playing games at ludicrously high frame rates is what really sets PC gaming apart from the console experience. The responsiveness and fluidity of a game blistering along at over 140 frames per second is revelatory. Once you experience it, you’ll wonder how you survived at a paltry 60fps for all these years.

Console gamers are only now beginning to glimpse gaming at high frame rates with 120Hz support on the PS5 and Xbox Series X. But only a very small list of titles support the 120Hz mode and usually with a significant sacrifice in visual detail.

In the PC world, however, a powerful GPU and CPU combination lets you brute force your way to high frame rates with much less visual compromise than consoles, and your experience is more customizable.

Recent years have seen the emergence of new technology made specifically for ultra-high-frame-rate play, especially with the arrival of 300Hz gaming monitors. But unlike at conventional frame rates, high-frame-rate gaming places high demand on your CPU. At 200+ frames per second, the CPU is seriously taxed and can become a bottleneck if it’s not up to the task.

So what does it take to run at such blistering speeds, and how much of a gain can you get from a modern CPU? Intel has just launched the brand-new 11th-gen Intel Core i7 11700K. It’s a fast 8-core, 16-thread processor that serves as the newest entry into the Core i7 series, which is widely considered to be the sweet spot for gaming PCs.

I’ve cherry-picked a selection of in-game benchmarks to test the performance of the new chip against a previous gaming champion, the revered 8th-gen Intel Core i7 8700K. I found out just how fast the new processor can go when gaming at high frame rates and how much of a jump you can expect over the legendary 8700K.

Shop the New Intel Core i7

Here’s Why You Need a Fast CPU

Traditional thought dictates that the graphics card in a gaming PC does all the heavy lifting, while the CPU is barely taxed. Generally speaking, this is true when gaming at the highest resolution possible at around 60fps.

However, if you’re a competitive gamer that prioritizes high frame rates over resolution, suddenly your CPU plays a more critical role, because it has to tell the GPU what to draw in each frame.

Think of the CPU like a manager in a mailroom and the GPU as the couriers. The couriers do all the hard work delivering packages, but if the manager can’t give them packages fast enough, you’ll have couriers sitting around idle. If your CPU can’t crunch through draw calls fast enough, the GPU becomes underutilized.

This makes getting a modern CPU like the Intel Core i7 11700K an important step in building a PC specifically for fast-paced competitive gaming at very high frame rates.

With eight processor cores (16 threads), the latest Rocket Lake CPU packs two cores (and four threads) more than the venerable 8700K, which launched in 2017. At $399, the new Core i7 CPU runs at a base frequency of 3.6GHz, with a Max Turbo Frequency of 5GHz. This, along with generational refinements, gives the 11700K the extra headroom necessary to push well beyond 200fps and deliver the lightning-fast gaming that competitive players require.

In order to demonstrate CPU performance and take the focus off of the GPU, I ran all of my benchmarks at 1080p resolution with medium graphics settings. The RTX 2080 is typically thought of as a 4K GPU, so at this lower resolution, the GPU becomes underutilized, and this allows me to measure the raw performance of the CPU instead.

I picked four games that would demonstrate the gains you would get over the 8700K in a range of scenarios, from highly demanding next-gen games to competitive first-person shooters and racing.

The numbers don’t represent actual gameplay frame rates but offer an insight into the relative improvements from the 8th-gen to the 11th-Gen Core i7.

This is one of the most popular competitive first-person shooters around, and it also happens to have a great in-game benchmarking tool that can demonstrate the insanely high frame rates that pro gamers will go for. 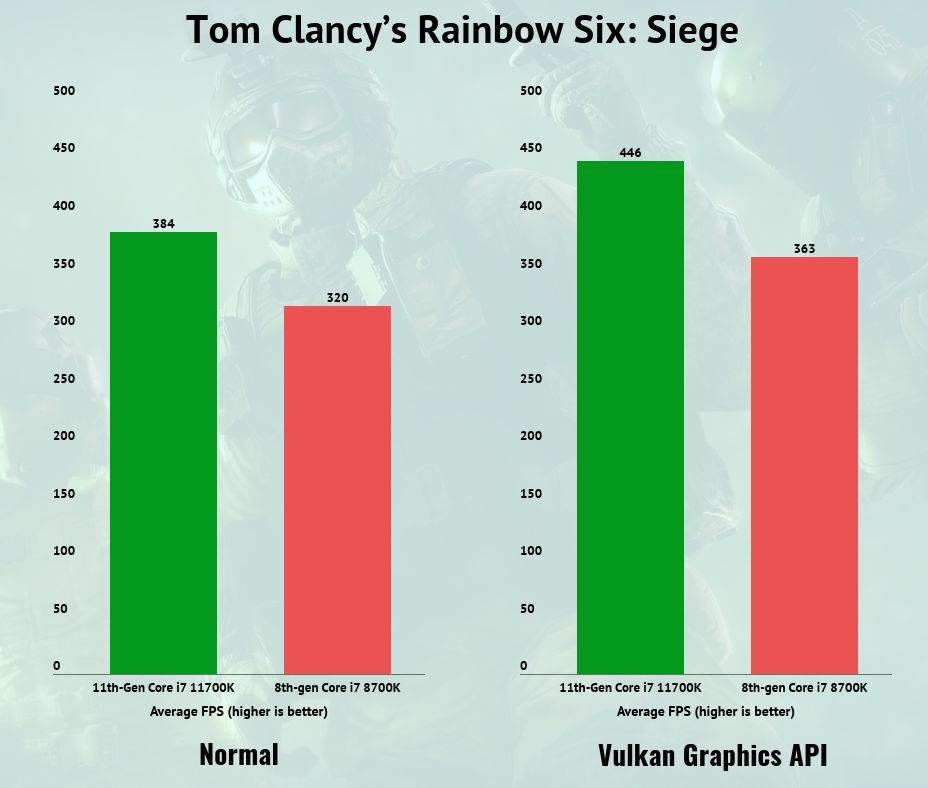 Interestingly, Siege is also compatible with the newer Vulkan graphics API, a switchable option upon booting the game. In Vulkan mode, I saw bigger gains of 22% on the 11700K. Siege also took the award for highest peak frame rate in all of my testing at 549fps.

You won’t get that frame rate during a multiplayer match, but it’s interesting to see the speed and scalability of this game when given the room to breathe on a newer CPU with more processor cores.

Far Cry 5 is said to be a game that benefits most from increases in single-core clock speeds as opposed to added cores. And so I chose this game to showcase the 5GHz Max Boost Frequency of the 11700K. 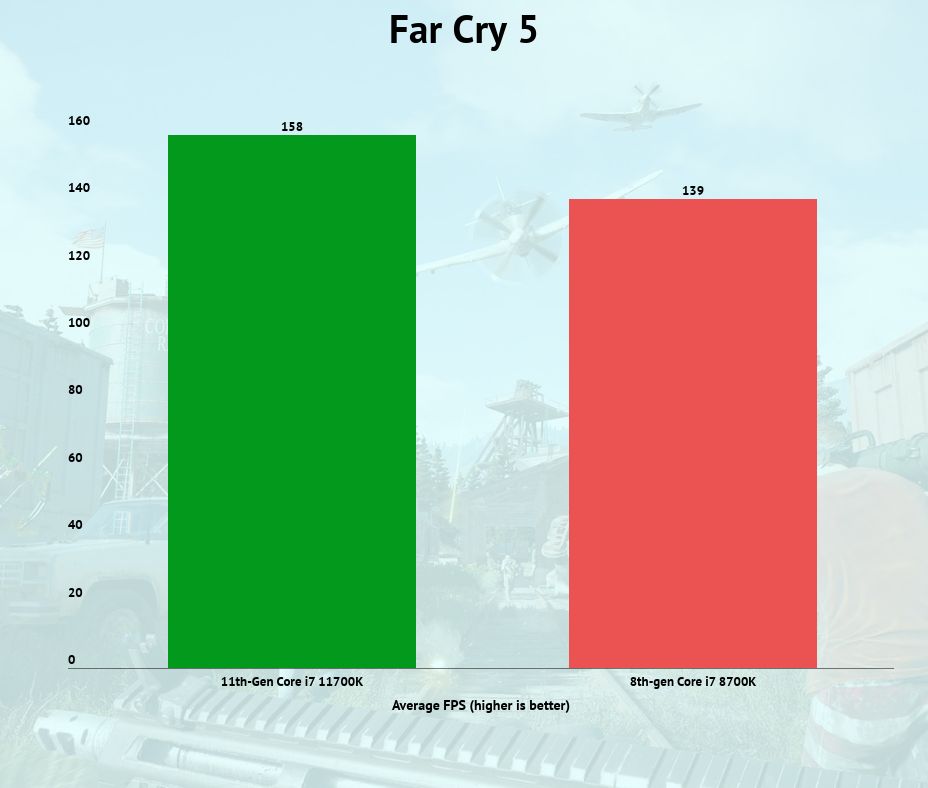 Sure enough, I saw a roughly 13% jump in performance on the new CPU over the older 8700K, which has a lower Max Boost Frequency of 4.7GHz. The benchmark registered an average frame rate of 158fps on the 11700K, which gives you enough headroom to push up visual settings significantly and still see frame rates over 100fps.

Arguably the biggest blockbuster release of 2020, I picked Cyberpunk 2077 to test how an incredibly demanding, next-generation game engine benefits from a fast CPU, and I came up with some interesting findings. This game is so heavy on graphical detail that even at 1080p I was still hitting the limits of the RTX 2080. This meant that in some scenarios, particularly when in buildings or walking in corridors, I saw almost no difference in frame rate between the two CPUs, both hovering around 100fps. But in a bustling area of the city, when the CPU is taxed more heavily by crowds of AI characters, traffic, and streaming world data, the 11700K remained stable at over 90fps, while the 8700K stumbled down to 70fps.

This goes to show that even if you’re not a competitive multiplayer gamer, having a strong CPU will be important for dealing with the incoming wave of next-gen titles built for high-end hardware.

While high-frame-rate gaming is usually associated with multiplayer first-person shooters, pro racers will also attest to the importance of ultra-low latency input and sharp visual feedback. As far as racing sims go, they don’t get any faster than F1 2020. 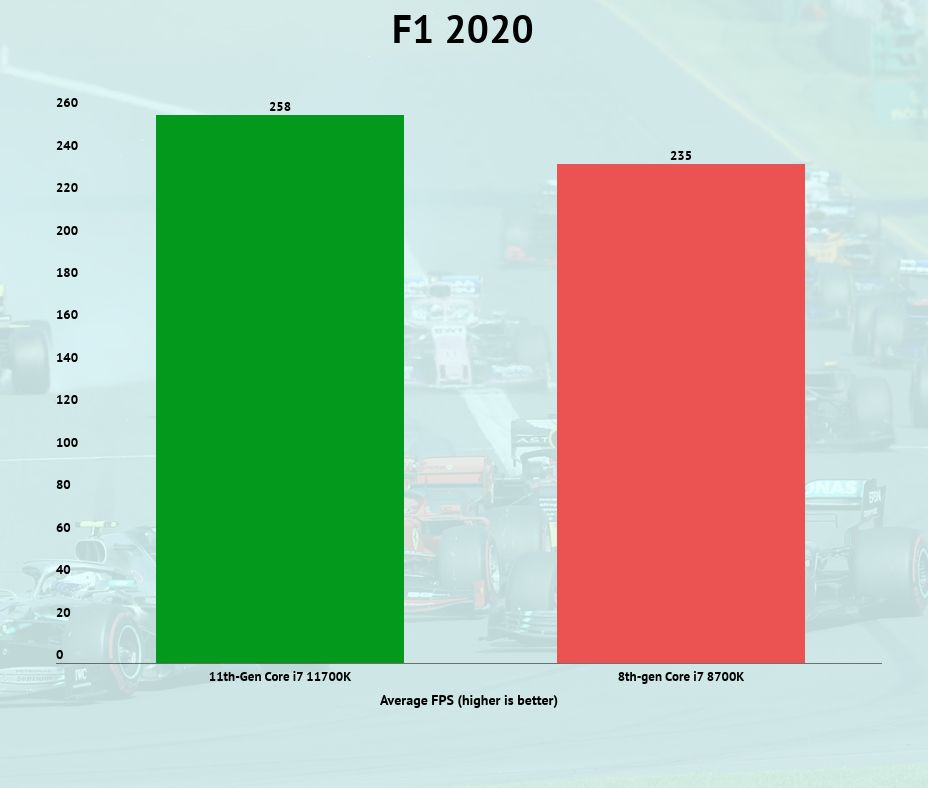 This game has an excellent benchmarking tool. I set the full field of cars loose on a single lap around Albert Park in Melbourne, Australia, and netted an average of 258fps on the 11700K. The 8700K was, on average, around 23fps slower, and it also saw dips down to lows of 190fps, while the 11700K never went below 220fps during my test. This means that not only was the new CPU roughly 10% faster on average, it also maintained more consistent performance during more demanding moments.

At this frame rate, judging your braking points and reacting to sudden hazards is that little bit easier. All you need now is a nice steering wheel and pedals.

As my benchmarking demonstrates, the 11700K provides enough speed for gaming at high frame rates. But a powerful CPU is good for so much more than just high FPS.

When gaming at a 1440p or 4K resolution with maximum graphics settings (placing the greater burden on the graphics card), the 11700K performs excellently with ample headroom. The Corsair H60 liquid cooler maintained temperatures of 58C, well within the thermal comfort zone.

Its 8-core, 16-thread architecture means the 11700K is also a multitasking brute. Playing F1 2020 at ultra settings in 1080p while streaming directly to Twitch, I measured a paltry and imperceptible 2% drop in frame rate. Video and image encoding thrives on multi-core CPUs, and while there are certainly bigger multi-core CPUs available, the 11700K presents the right balance for gaming and productivity, with strong Cinebench multi-core scores around 11,742 (the 8700K scores 7,696).

Building a great gaming PC is all about getting the best performance for your dollar. Like its 8th-gen predecessor, the Intel Core i7-11700K with its eight processor cores represents the sweet spot for gamers.

When playing at high frame rates, the CPU plays an especially important role, and the new Core i7 packs enough of a punch to allow for incredible refresh rates when paired with a strong GPU. But 4K gaming is also no problem for the new Rocket Lake CPU, and if you like to stream gameplay to services like Twitch, you’ll be able to do so without sacrificing any appreciable performance.

Meanwhile, having 16 threads with a high-peak Turbo clock speed of 5GHz also makes the 11700K a strong CPU for multitasking and productivity. Sure, there are 12 or even 20-core beast CPUs out there that are excellent for high-end productivity tasks, but since current video games tend not to scale much past eight cores, you’ll be paying a lot more money for very little appreciable gain in gaming.

At the current price of $399, the 11700K delivers great single-core clock speeds and enough multi-threaded performance to make for an excellent high-end gaming rig.