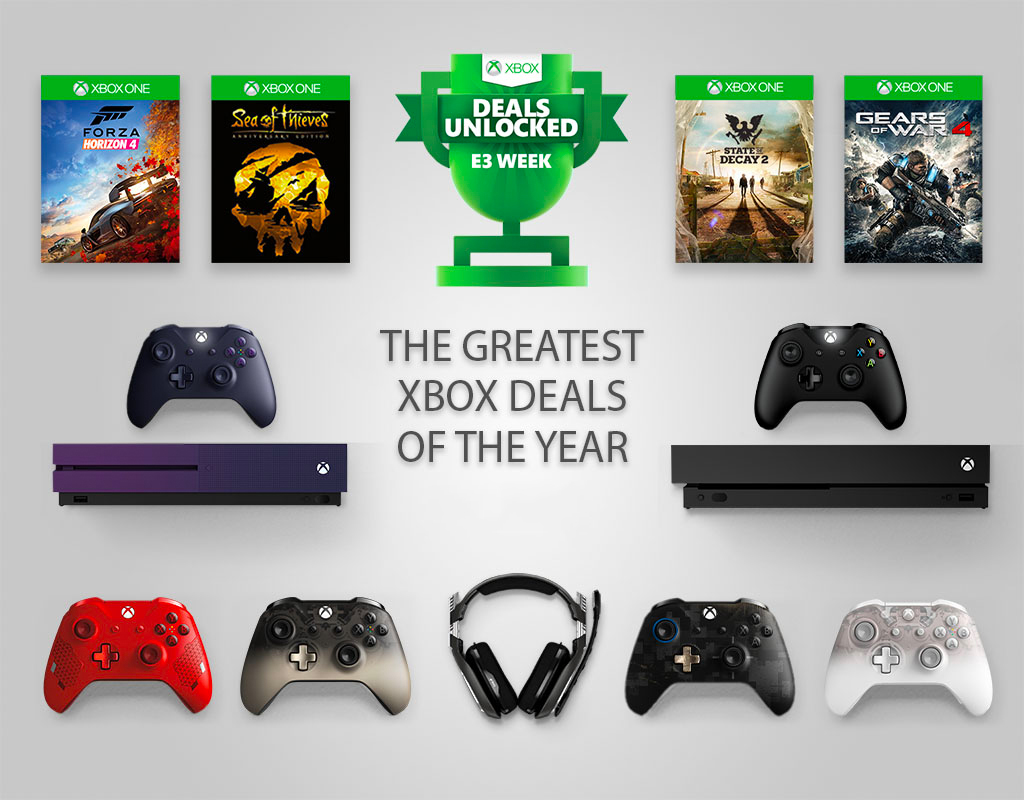 In honor of E3 2019, Microsoft has announced Deals Unlocked, a celebration of gaming to compete against Sony’s Days of Play extravaganza.

Advertised as “The Greatest Xbox Deals of the Year,” Microsoft is offering discounts on consoles, accessories and games from June 7th to June 17th. Special sale prices will be available online at xbox.com, the Microsoft store and in-store at participating retailers.

Microsoft is offering a $50 discount on the newly released Xbox One S Fortnite Battle Royale Special Edition bundle. The $249.99 package comes with a plethora of purple goodies, including:

This discount also applies to other Xbox One S bundles, as well as the recently released discless Xbox One S All-Digital Edition, which has dropped to $199. While this is a pretty good price for the new console, Slickdeal members like htaddicted were quick to point out, “you can get the disc version for same or cheaper.”

If you have been planning on upgrading to an Xbox One X, the 4k gaming machine and its bundles will be marked down by $100 to help with the transition. While $400 is less than the Xbox One X’s retail price, it’s far from the lowest offer we’ve seen for the console. If you have a military ID, you can pick one up for $350 right now. For everyone else, we’ve seen a lot of recent deals offering Xbox One X’s for $340 (or less if you’re okay with a refurbished unit).

A $10 discount is available for select Xbox One controllers as well in case you need to grab one or two for some multiplayer fun.

The Best Offers in the Xbox Deals Unlocked Sale

Xbox enthusiasts can save up to 75% off hundreds of select games, including both new releases and beloved classics.

There are plenty of hot new games up for grabs, including:

This is also a great time to pick up some heavily discounted hits from the past couple years, like:

A PC Twist to the Greatest Xbox Deals of the Year

This year, Microsoft is heading back to its roots with sales from its PC gaming partners, Asus, Razer and MSI. You can save up to $500 if you are looking to get your hands on a new gaming PC or laptop, as well as FreeSync monitors to top off your gaming experience. Here are a few of the most exciting bargains:

If you need something fun to play on your new PC gaming rig, Microsoft has your back. Xbox’s Play Anywhere feature means you can pick up games like Gears of War 4 or Tacoma while they’re on sale and play them on both your Xbox and your PC.

It’s clear Microsoft is not shy about going deal for deal with its biggest console competitor, Sony. More retailers are sure to join the fray as E3 gets rolling, so make sure to set up some Deal Alerts to stay on top of all the best offers.