+18 Deal Score
56,173 Views
Bank of America is offering 50,000 bonus points after you make at least $3,000 in purchases in the first 90 days of account opening with the Bank of America® Premium Rewards® Visa® credit card. The annual fee is $95. Slickdeals may be compensated by Bank of America. 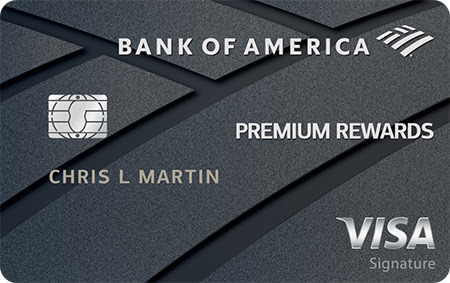 Apply Now
Good deal?
You gave thanks to slickdewmaster for this post.
Thank you!

slickdewmaster posted this deal. Say thanks!
Add Comment
Reply
in Credit Cards (3)
If you take advantage of an offer on our site, Slickdeals may receive a commission.
Deal
Score +18
56,173 Views
Apply Now

They already make money off the vendor and if you dont pay off your monthly balance...but they need more.

If you actually travel much you can often do better than 5.25% cash back using flexible point systems like Chase or Amex or even Citi... (and not need to park 100k at BoA to do it either)

There's no reason to be afraid of annual fees for signup bonuses, they're highly profitable above the fee first year.

eh... it can be depending how you redeem other rewards... for example it's not hard to get 4-6 cents per point cash-equivalent for business class airplane bookings with point transfers, meaning the 1.5x chase points you can get with an unlimited card has you earning 6-9% cash-back-equivalent when used that way.

Ditto the 2x Amex MR points you can earn with a blue for biz plus card.

Plus the various chances to get 3x, 4x, or 5x in certain categories of online spend with various Chase or Amex cards, where again the points can be worth a lot more than 1c per.


Lastly for at least 1 quarter a year you can usually get 10% back churning DiscoverIT cards on any "online" purchase via paypal too though that's less flexible than "all" purchases.


None of the above require parking 100k with BoA to qualify either.


That said- 5.25% if you're already going to qualify for Platinum Honors, even though there's a $2500 cap on such spending a quarter, is certainly pretty solid for most folks.

So that only makes sense if you spend quite a bit on travel.

But even then it kinda sucks because there's a $2500 per quarter cap on spending- which won't cover the outlay on a lot of trips.

And it sucks even more because you can earn 3x-5x on that same travel with Chase and Amex and even Citi cards, which can get you way more than 5.25% cash-back-equivalent toward other travel.... and with no spending cap to speak of either.


You can't transfer your 401k, but you can roll it over to an IRA... this may, or may not, be a good or bad idea for a given person depending on their options/costs/circumstances with their existing 401k plan....


Plus, of course, something like half the US population doesn't have a 401k.... and for the half that do, the average balance is barely over 100k so roughly half of them won't qualify for Plat Honors even if it otherwise isn't a problem for them to roll it over to BoA.


So "quite easy to get" is a pretty check-your-privilege kinda thing to toss out there... It's very easy if you have six figures of specifically tax-advantaged, fully vested, investment $ to park there- AND no other reasons not to do so....which isn't something most Americans actually have.
0
0
0
0
Reply
This comment has been rated as unhelpful by Slickdeals users
Joined Jul 2006
L4: Apprentice
337 Posts
66 Reputation
06-18-2019 at 05:00 PM #84
Fair enough.

I don't travel enough to make it worthwhile for me to keep any of the exclusive travel cards. But i could see how that is a viable option for someone who typically spends 5-8k on vacations/year.

For general spend, i primarily use the BOA cash card and Chase Freedom or Discover IT, depending on rotating cashback category.
0
0
0
0
Reply
This comment has been rated as unhelpful by Slickdeals users
Joined Sep 2009
L10: Grand Master
11,191 Posts
3,291 Reputation
06-18-2019 at 05:01 PM #85
Both chase and Boa let you redeem your points for cash. That's the "easy" way to redeem either.

With BoA it's pretty much the only way. At 1 cent per point.

With Chase you can potentially get 1.25 cents or 1.5 cents per point when it's used for travel depending which chase cards you hold... that's also fairly simple but requires booking via the Chase travel portal.


The best way, by far, to rack up a lot of reward points though is not normal spending.

Depending on the amount you spend monthly you could rack up hundreds of thousands of points in a single year just opening a bunch of cards and completing the bonus spend on them (and your spouse can potentially do the same).... versus only maybe tens of thousands for the same amount of spending done "normally" on any single card.


But again it takes some work/research/keeping track of stuff to do this...and some folks aren't willing to do that.

May 3- Open a Chase Sapphire Reserve- 50k UR for 4k spend (the CSR is superior to the Sapphire Preferred by a mile if you actually travel much, and you can only get one of em)

And you have 245,000 Chase UR points for the signups, and then all the normal points earned on the spend, which will be between 1x and 5x depending what categories the spend was in- let's say just 1x for all of it though, so still over 260,000 chase points.

Versus if you'd simply run that 15.5k through a single BoA card where you might (if you had 100k parked there) get somewhere in the ballpark of 1k including the $500 signup bonus IF all your spend was in the right category too.

Anybody can (assuming good credit and the ability to make the spend).

Chase rules are basically these:

5/24- they won't approve any new cards if you've got 5 or more personal lines of credit opened in the last 24 months- so I start from assuming you're at 0 when you begin.... (business cards open don't count against the 5...but being over the limit of 5 will prevent business card approvals)


The timetable I list fits under all those rules.

Technically you could have 3 already-open accounts in the last 2 years and still do what I describe since the first 3 cards are biz cards.... but I was replying to someone who appeared to be asking what to "start" with.
0
0
0
0
Reply

SoFi Money: Earn Rewards That Will Beat Your Credit Card

Best Places to Buy Life Insurance Without a Medical Exam

Slickdeals is an independent, advertising-supported service. The card offers that appear on this page are from companies from which Slickdeals receives compensation. This compensation may impact the location and order in which these products appear. Slickdeals does not include the entire universe of available credit or financial offers.