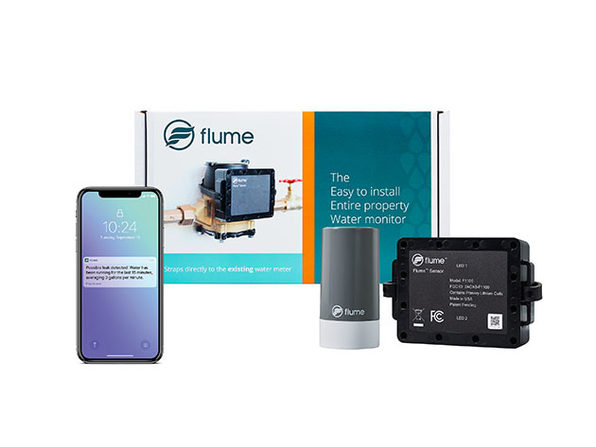 0
Reply
This comment has been rated as unhelpful by Slickdeals users
Joined Jul 2019
New User
1 Posts
10 Reputation
11-12-2019 at 01:39 PM #47
Hi Scott, as long as your meter pit lid isn't a thick metal material you will have no problems connecting.

The Flume system has a WiFi bridge that communicates over RF to the water sensor, which straps to the meter. WiFi does not need to reach your water meter. Our system can communicate with underground meters up to 1000' away. It is tricky to send data further than that, but 50' will be no problem.

0
Reply
This comment has been rated as unhelpful by Slickdeals users
Joined Jul 2019
L1: Learner
4 Posts
26 Reputation
11-12-2019 at 01:47 PM #49
The Flume system is waterproof at depths up to 3 feet. It will survive indefinitely at this depth, but the signal may be affected until the meter pit drains out.

0
Reply
This comment has been rated as unhelpful by Slickdeals users
Joined Jul 2019
L1: Learner
4 Posts
26 Reputation
11-12-2019 at 01:49 PM #50
The Flume sensor operates on 4 lithium AA batteries. It is designed to last 18 months before needing batteries replaced. The app will notify you when batteries are low and provide you with a link for a replacement set.

0
Reply
This comment has been rated as unhelpful by Slickdeals users
Joined Oct 2004
L7: Teacher
2,315 Posts
495 Reputation
11-12-2019 at 01:59 PM #51
If you haven't already and if it's not too late, you should try reaching out to your water company to see if they have an accidental usage policy. I had a similar issue, a pinhole leak in a hot water line under the house that I didn't notice for a little over a month, and I had a similar bill. I worked with them and they cut it in half which still hurt, but sucked much less. While it won't matter in your case, it's worth noting that power companies also might have similar policies.

I can't speak for the other person, but at least in my area (Cali), rates are not that cheap and they're tiered (so as you use more, you pay more per unit, and that increases dramatically). My water district bills monthly so with my leak, I didn't know a little over a month.

This comment has been rated as unhelpful by Slickdeals users
Joined Jul 2018
L2: Beginner
62 Posts
70 Reputation
11-12-2019 at 02:19 PM #53
Hello Erica with Flume, is stacksocial an authorized seller of your product? Okay to buy from them?

EBMUD will provide a rebate for up to 50% of the value of the monitor, to a maximum of $200

0
Reply
This comment has been rated as unhelpful by Slickdeals users
Joined Feb 2008
L3: Novice
288 Posts
26 Reputation
11-12-2019 at 04:29 PM #59
Issue with this is that it serves no purpose if your toilet is clogged and overflows. If this had integration with smart things or wink via zigbee or zwave

7 Amazon Basics to Build a Home Gym for Under $100

Weekend Woodworkers are Snapping up This $5 Stanley Chisel Set

Should You Buy A KitchenAid Artisan Stand Mixer?
Copy Code & Open Site More Deals from
Did this coupon
work for you?
Copy
Link Copied to Clipboard