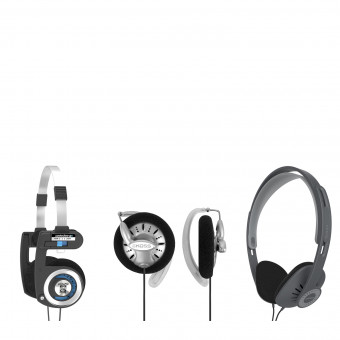 dox83 posted this deal. Say thanks!
Add Comment
Reply
Created 11-28-2019 at 02:31 AM by dox83
in Headphones (4) Get Koss.com Coupons
If you purchase something through a post on our site, Slickdeals may get a small share of the sale.
Deal
Score +6
1,932 Views
$42.49
See Deal
Want more deals like this? Create a deal alert for Headphones.
Add Deal Alert for Headphones

Reply Helpful Comment? 0 0
This comment has been rated as unhelpful by Slickdeals users
Joined Nov 2007
L7: Teacher
2,535 Posts
1,283 Reputation
11-28-2019 at 05:10 AM #5
Last week's were actually an upgraded model over this. The Massdrop version has a microphone and thicker cords. This is the base original.

The ear clip things were $14, last I saw. Two of the phones here for less than $24, and the third is $20 usually. So this isn't a smoking deal. It's a very good but not lowest price and you're forced to buy all 3 and the prices I listed were for better models.
Reply Helpful Comment? 0 0
This comment has been rated as unhelpful by Slickdeals users
Joined Dec 2018
L2: Beginner
36 Posts
18 Reputation
Original Poster

11-28-2019 at 05:21 AM #6
pretty sure you are talking about the drop deal which was a one time first time user code. something that will never happen again more than likely. plus drop shipping takes like a month and i believe they charge tax.
Reply Helpful Comment? 0 0
This comment has been rated as unhelpful by Slickdeals users
Joined Nov 2007
ob-la-di, ob-la-da
19,260 Posts
7,548 Reputation
Pro

The Massdrop versions were improved over these so not really comparable - it's more in line with the features of the Special Editions.

On the other hand, to get both the clips and the Porta Pro that way would require dishonesty - two "new user" accounts.

So if you only wanted one pair of headphones, the Drop deal is way beyond this and could come back. If you want all three, or you want them right now, this bundle is warm. Right now the same three on Amazon are $58 plus tax. Porta Pro is $25, KPH30iK is $20.

Pretty much what I said before. Individually, or features-wise, the Drop deal was far better. But it's not here now.
Reply Helpful Comment? 0 0