The Lord of the Rings: One Volume (Kindle eBook) EXPIRED

The following is no longer available 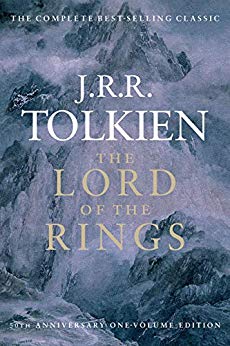 Note, offer valid only for December 2, 2019 or while promotion last.


Add Comment
Reply
in eBooks (5) Get Amazon Coupons
If you purchase something through a post on our site, Slickdeals may get a small share of the sale.

It's weird seeing an author's work go from amazing to unreadable. It happened with Orson Scott Card too... his first three books in the Ender series were incredibly good and some of my all time favorites. Then he just kept telling more and more stories in that universe and his writing got worse and worse with each new book, until he was writing some incomprehensible story about world politics that didn't seem to go anywhere.

Well, it depends on what you count as a waste. I could have done without everything involving Tom Bombadil, and much of the poetry. But when the story is actually going somewhere (which is most of the time) his writing is excellent.

Reply Helpful Comment? 1 0
This comment has been rated as unhelpful by Slickdeals users
Joined Jul 2011
L1: Learner
4 Posts
10 Reputation
12-02-2019 at 10:06 PM #34
It can, that doesn't mean it was...the comment I was replying to seemed to dismiss the potentiality that LOTR had moved in to the public domain at all.

I agree with you, I really do wonder if there's some kind of change in the brain involved, especially for Orson Scott Card. The guy wrote a story including a planet of people with extreme OCD who believed their mental illness brought them closer to God, then reveals the illness is intentionally caused by humans and the religious beliefs are fake. He writes a sci-fi explanation for the soul and the afterlife that have nothing to do with a god or Heaven. He even has a character who meets a nun and learns about religion, and seems to conclude that it's all nonsense, and thinks "if God is all powerful then why does he allow innocent people to suffer, and if he allows that then why would I want to worship him."

20 years later, he's a bible thumper campaigning against gay marriage, saying it will tear society apart, and he's lost his talent for writing. Something must have happened to him.
Reply Helpful Comment? 0 0

If you think George r r Martin is bad go read a terry goodkind (wizards first rule) I think it's the first 20 pages to describe a vine. A vine. His series spans 1000pg books. 17books I think.

After you read terry go back to Martin you'll be fine. Lol.
Reply Helpful Comment? 0 0
This comment has been rated as unhelpful by Slickdeals users
Joined Nov 2018
L2: Beginner
54 Posts
54 Reputation
Pro

Do Chase's New Lyft and DoorDash Benefits Also Apply to Authorized Users?
Copy Code & Open Site More Deals from
Did this coupon
work for you?
Copy
Link Copied to Clipboard