The Retina Display has found its way onto the late 2018 gold Apple 13.3" MacBook Air.


With over 4 million pixels, the 13.3" Retina Display features a 2560 x 1600 screen resolution and a 16:10 aspect ratio for 227 pixels per inch (ppi). The display also features up to 48 percent more color than the previous generation. The display glass goes right to the edge of the screen for 50% less bezels.


The integrated Touch ID sensor allows you to unlock your MacBook Air with your fingerprint and authenticate your identity. You can also make secure online purchases with Apple Pay. Paired with the Apple T2 security chip, the T2's Security Enclave protects your Touch ID information and also ensures that software loaded during the boot process has not been tampered with. The T2 also features an SSD controller with on-the-fly data encryption for everything stored on the SSD for a secure boot process.


The keyboard utilizes Apple's butterfly mechanism for precise and responsive typing. Each key is individually backlit and works with an ambient light sensor for a more uniform illumination. You can also use the Force Touch trackpad, which is 20 percent larger than the previous generation, and has pressure-sensing capabilities as well as haptic feedback. The stereo speakers have also been improved to provide twice the bass and 25 percent more volume than the previous generation.


Featuring a significantly smaller footprint, the MacBook Air takes up 17 percent less volume, is 10 percent thinner measuring just 0.61 inches at its thickest point, and at just 2.75 pounds is a quarter pound lighter than the previous generation. Made from a custom Apple-designed aluminum alloy, the MacBook Air was created out of 100 percent recycled aluminum. This custom aluminum alloy helps reduce the MacBook Air's carbon footprint by nearly 50 percent.


The system is powered by an 8th Gen 1.6 GHz Intel Core i5 dual-core processor and has 16GB of onboard 2133 MHz LPDDR3 RAM and a 512GB PCIE-based SSD. Connect to the internet via Wi-Fi 5 (802.11ac) and use Bluetooth 4.2 to connect wirelessly to compatible peripherals and accessories. The dual Thunderbolt 3 ports provide high bandwidth of up to 40 Gb/s and the versatility of USB Type-C.


This Mac comes preloaded with macOS. Updates can be downloaded for free via the Mac App Store. Please check Apple's website for upgrade eligibility.


With four times as many pixels as an HD display, the 13.3" Retina IPS Display provides up to 48 percent more color than the previous generation. The Retina Display has a 2560 x 1600 screen resolution and a 16:10 aspect ratio for 227 pixels per inch (ppi). The display glass goes right to the edge of the screen, making the bezels 50 percent thinner than before.


The advanced security and convenience of Touch ID is built into the MacBook Air. Simply place your finger on the integrated Touch ID sensor and your MacBook Air unlocks. Use your fingerprint to immediately access locked documents, notes, and system settings. You can also use Apple Pay securely during checkout while online shopping. No need to enter shipping or billing info, and your card details are never shared.


Introducing the Apple T2 chip, a second‑generation custom Mac silicon designed by Apple to make MacBook Air even more secure. The Apple T2 chip includes a Secure Enclave coprocessor that provides the foundation for secure boot and encrypted storage capabilities. It also consolidates many discrete controllers, including the system management controller, audio controller, and SSD controller, into one. And the Apple T2 chip brings a familiar voice to MacBook Air - Hey Siri is always ready to open apps, find documents, play music, or answer your questions.


The keyboard features the butterfly mechanism, which provides four times more key stability than a traditional scissor mechanism, and has greater comfort and responsiveness. And individual LED-backlit keys with an ambient light sensor help you type in low-light environments.


The Force Touch trackpad lets you interact with your MacBook Air in a variety of ways based on subtle differences in pressure. You have precise control and a uniform response — no matter where you click the trackpad — as well as plenty of room for Multi-Touch gestures, like pinch and zoom.


Thunderbolt 3 is a hardware interface that utilizes the reversible USB Type-C connector. Doubling the speed of its predecessor, Thunderbolt 3 features a maximum throughput of 40 Gb/s when used with compatible devices. The connector also transmits data via USB 3.1 at up to 10 Gb/s, and dual-bandwidth DisplayPort 1.2 allows you to connect up to two 4K displays simultaneously. Additionally, you can daisy chain up to six devices from a single Thunderbolt 3 port.


The improved stereo speakers features twice the bass with greater range and has 25 percent more volume than the previous generation. The wider stereo sound creates immersive audio when you're listening to music or watching a movie.


The front-facing HD camera allows you to FaceTime with friends and family in HD quality for either one-on-one or group calls. The three integrated microphones form an array that can accurately capture your voice for FaceTime calls, as well as dictation and talking to Siri.


The MacBook Air is the first Mac to be made of 100% recycled aluminum. The aluminum alloy was created by Apple and it delivers the same strength, durability, and finish — without having to mine any new aluminum from the earth for up to 47% lower carbon emissions compared to the previous generation. It's designed to use shavings of recaptured aluminum that are re-engineered down to the atomic level. 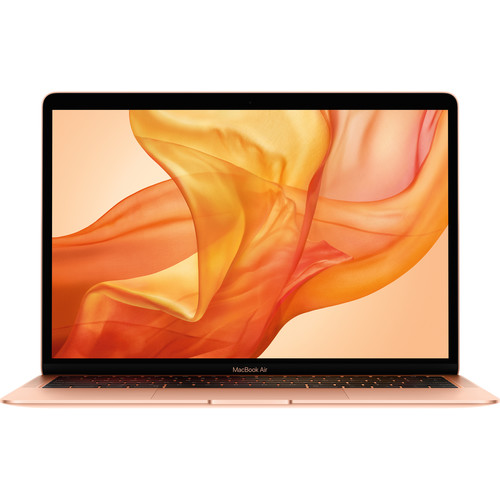 See Deal
Good deal?
You gave thanks to diskwzrd for this post.
Thank you!

diskwzrd posted this deal. Say thanks!
Add Comment
Reply
in Laptops (4) Get B&H Photo Video Coupons
If you purchase something through a post on our site, Slickdeals may get a small share of the sale.

Your post was from last month and expired. I did include a link on it that it wasn't dead anymore when I posted this but since yours was already marked expired because it ended before Christmas, it wouldn't come up on people's feeds anymore except for my new post... I know because I bought one from your deal before Christmas and needed a second one after but the price jumped back up. It stayed at $1800 for a while because I kept checking each day and it finally dropped back down with a new end date. This the deal I posted.
Reply Helpful Comment? 1 0
Last edited by diskwzrd January 5, 2020 at 09:59 AM.
This comment has been rated as unhelpful by Slickdeals users
Joined Jul 2014
L2: Beginner
62 Posts
14 Reputation
01-05-2020 at 08:47 PM #5
looks like it expires again
Reply Helpful Comment? 0 0
This comment has been rated as unhelpful by Slickdeals users
Joined Jan 2011
L3: Novice
214 Posts
42 Reputation
01-20-2020 at 08:27 AM #6
They have the price back down to 1199 for the gold 2018 MacBook Air 16GB RAM, 512GB.
Reply Helpful Comment? 0 0
Page 1 of 1
1
Join the Conversation
Add a Comment
Deal Alerts

Apple Airpods Pro are $234.99 at Amazon with free shipping