What is the Celebration Edition? [youtube.com]

"Upgrade your copy of STAR WARS™ Battlefront™ II to the new Celebration Edition and own over 350 cosmetic customization items – including the latest STAR WARS™: THE RISE OF SKYWALKER™ Appearances for Finn, Rey, and Kylo Ren." 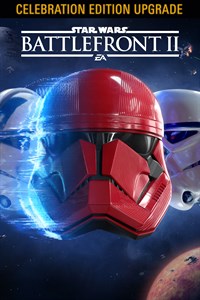 I have no idea what EA are thinking on this one.

This comment has been rated as unhelpful by Slickdeals users
Joined Dec 2015
L3: Novice
139 Posts
26 Reputation
Our community has rated this post as helpful. If you agree, why not thank ?
01-06-2020 at 03:55 PM #9
Because games use to have all the cosmetic stuff in game, that you would unlock by playing the game. If these are the ones that are currently in game, then you can unlock them with an unholy grind: According to Soeren Kamper on Star Wars Gaming, "It will take 4,528 hours of gameplay (or $2,100) to unlock all base-game content in Star Wars Battlefront 2." That is stuff that they created for the game, (which you just paid $59.99 for the base version) but took out of the base game to put behind a paywall. After the tremendous backlash from fans, EA took them out so you couldn't buy...for a couple years and put them back in.

Hands-on with Slickdeals: Microsoft Xbox One X Review
Copy Code & Open Site More Deals from
Did this coupon
work for you?
Copy
Link Copied to Clipboard