$5.60
w/ S&S + Free S&H
+52 Deal Score
9,813 Views
Amazon has 3-Pack 13oz. Carnation Malted Milk (Original Flavor) on sale for $5.58 when you checkout via Subscribe & Save (select the later date from the "First Delivery On" menu). Shipping is free while Subscribe & Save is available. Thanks Bigzamboni

Note, you may cancel Subscribe & Save any time after your order ships. In stock on February 2, 2020. 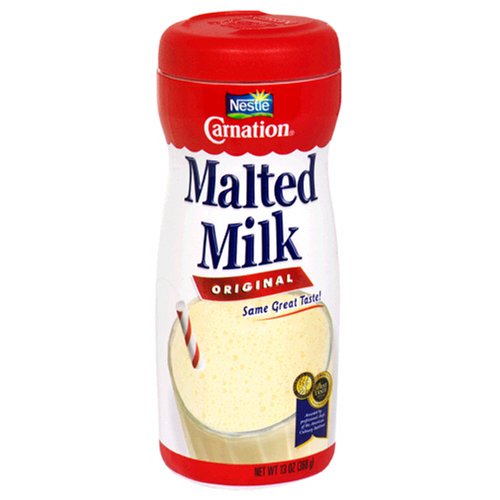 Bigzamboni posted this deal. Say thanks!

These are usually almost $4 for one container.

I purchased some of these in October. The "best by" date was well into the future, so there likely shouldn't be an issue with the "best by" date on this stock. Since this is a powder, this stuff will last well beyond that if you keep it dry. Can put it in your doomsday shelters.

This is not the same as "Diastatic Malt" that is often used in bread baking, but does have other uses in baking and is great in waffles.

Add Comment
Reply
in Drinks & Beverages (4) Get Amazon Coupons
If you purchase something through a post on our site, Slickdeals may get a small share of the sale.

01-08-2020 at 07:25 AM #34
The original, Swiss version is "Ovomaltine" and contains no added sugar. Note the spelling. Ovaltine was actually a typographical error when the original producer, Wander AG, applied for a trademark in the UK. If it doesn't say Ovomaltine, it's not the original Swiss version. AFAIK, all versions of Ovaltine contain added sugar.

It contains cocoa and the malt flavor is definitely stronger due a higher concentration of barley malt and less milk powder, so it's not exactly the same thing as the Carnation.

01-08-2020 at 08:27 AM #37
It's relatively high calorie, but a lot of it is from protein, so the added fat and sugar help round it out, plus you get the benefits of coffee. I feel absolutely no guilt in drinking it, AND IT IS AMAZING
I use the Myprotein chocolate smooth flavor, and deals are posted on here constantly.
Reply Helpful Comment? 0 0

01-08-2020 at 09:31 AM #38
This is the "European" version that I buy. I found it on Amazon as well. It is still branded as "Ovaltine" but it comes in a glass bottle and the ingredients are different. At my 99 Ranch Market, it is on the shelf right next to the American version of Ovaltine.

Another reply mentioned a Swiss version under a different name "Ovomaltine". I haven't seen that here personally but I found that on Amazon as well. This appears to make 3 different variations of Ovaltine. According to the Amazon information, Ovomaltine does contain sugar as well though (via fructose). The European version uses tapioca syrup. Both the "European" and Swiss versions of Ovaltine probably have significantly less sugar than the American version though, which is way too sweet compared to the originals.

Additional Edit: I did more research and found out that the "European" version is basically the UK version. So the 3 main versions are: Swiss, UK, American.

Here is what an Amazon reviewer said about the Swiss vs UK versions:

I happen to really like the taste of malt which is probably why I like the European version which is ~73% malt. I could see why some may prefer the Swiss version though if you want a more chocolatey taste. I've never tried the Swiss version to compare (or if I have, I don't remember).

01-08-2020 at 11:34 AM #40
I have a few single-portion packs of the Swiss version that I purloined from the Swiss Air lounge in Zürich at some point that I found recently. 65% barley malt. Doesn't list the % of cocoa.Also looked it up on ovomaltine.ch The Swiss version uses dried condensed milk as opposed to the whey or "milk serum" so they do sneak in some sugar, but not pure crystalline sugar like the others. Also, the formulation of the portion pack seems to be slightly different than what the Swiss website says. Don't know if they reformulated (the pack I have is a few years old).

I checked their German site, Ovomaltine.de and that shows the German product as having 51% Barley malt and 13% cocoa.

So, calorie count is more or less the same across the board. Swiss has a fair bit less sugar, but less malt.

Also, from my experience, those dates are very conservative and items usually come much quicker, but YMMV

01-08-2020 at 12:30 PM #45
Hoosier Hill Farm that seems to sell a lot of dried foods for "preppers" and the like list a "best by" of 22-24 months.This company [briess.com] that manufactures malted milk powder for commercial uses puts a 24 month "best by." Carnation is quite conservative in their dating.

The main problem is that it is a hygroscopic subtance, so it tends to absorb moisture from the environment. An opened container forgotten in the back of a pantry will have higher chance of turning to a brick. A sealed container will definitely be safe for use past whatever is on the container, and it would definitely take a while for any stale/rancid taste to show up. Even if that happens, as long as it is still a free flowing powder, it would still be safe, but less palatable.

Is Amazon Prime Pantry Worth $4.99 per Month?
Copy Code & Open Site More Deals from
Did this coupon
work for you?
Copy
Link Copied to Clipboard