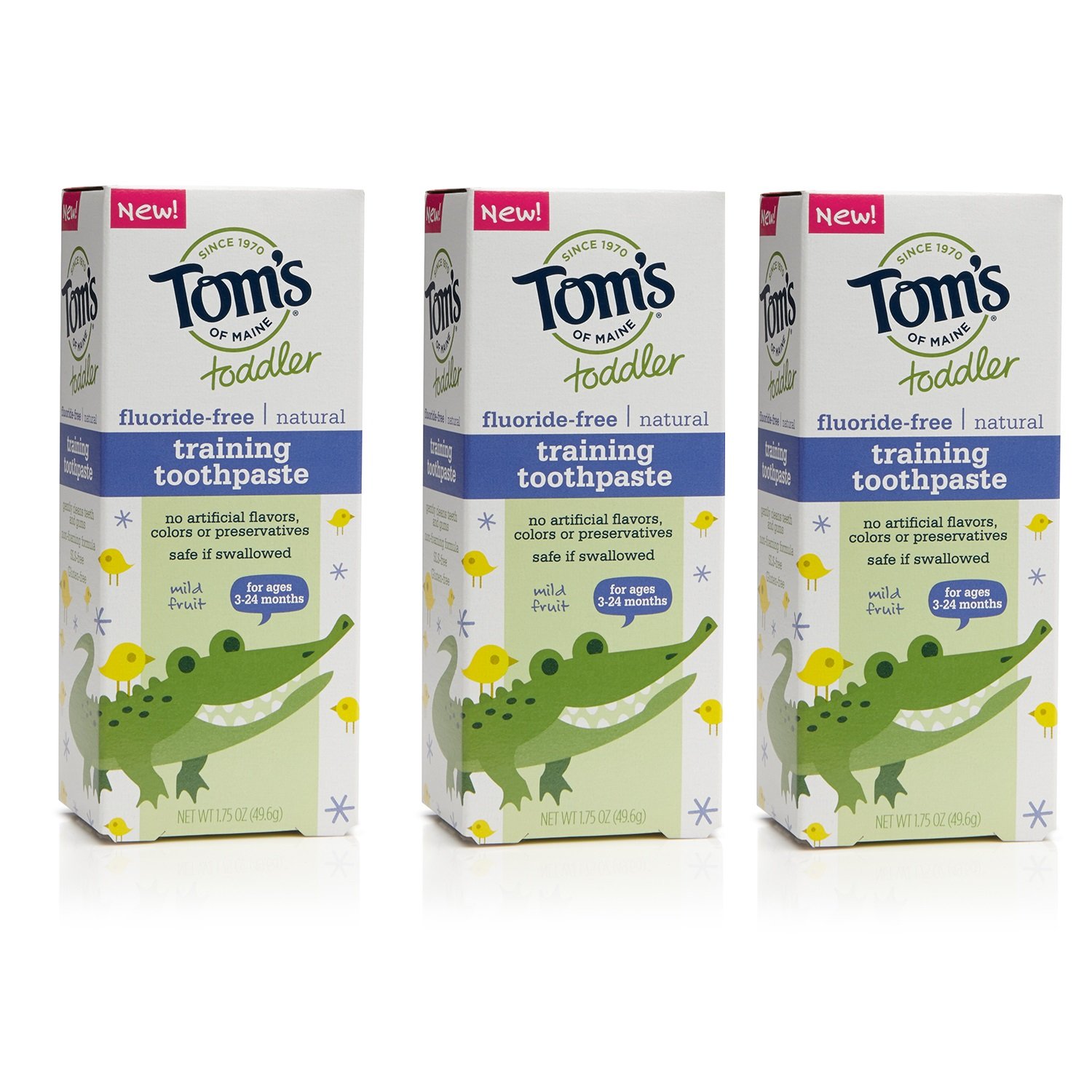 Written by Edited Yesterday at 12:17 PM by
Amazon [amazon.com] has 3-Count 1.75oz Tom's of Maine Toddlers Fluoride-Free Natural Toothpaste (Mild Fruit) for $5.40 when you checkout with Subscribe & Save. Shipping is free.

Note, you may cancel Subscribe & Save any time after your order ships. Select the later date from the "First Delivery On" menu to get traditional S&S checkout instead of adding to your cart.
Add Comment
Reply
Created 01-11-2020 at 10:36 PM by NightHound
in Toothpaste, Toothbrushes & Oral Care (6) Get Amazon Coupons
If you purchase something through a post on our site, Slickdeals may get a small share of the sale.
Deal
Score +34
14,149 Views
$5.40
$12.87
See Deal
Don't have Amazon Prime? Students can get a free 6-Month Amazon Prime trial with free 2-day shipping, unlimited video streaming & more. If you're not a student, there's also a free 1-Month Amazon Prime trial available.
Want more deals like this? Create a deal alert for Toothpaste, Toothbrushes & Oral Care.
Add Deal Alert

First, saying it's an etch is stupid, hydrofluoric acid is the industrial etch. That's like relating the oxygen in water to industrial peroxide. Furthermore, concentration matters in the world of chemistry. Look at peroxide, again. Your own body makes it daily and its part of your nonspecific immune system. If I put you in a vat of 70%, you'll melt.

I have an MD and a DDS. I went to dental school, wasn't for me. Did an OMFS residency with a year of general surgery, blah blah. I've probably got well over 25,000 hours of training and research under my belt (I read once the average resident has over 25k). I practiced public health dentistry on the side during med school, and OMFS is a 6 year residency. I know this stuff, more than a dentist, more than a physician, and definitely more than a guy who read a lot of agenda websites and clickbait. I've read it, I've practiced it, and used it, and I've seen the effects.

Fluoride free toothpaste is a waste of money. First, let's put aside your thoughts of fluoride. Foremost, no ingredient in toothpaste has been shown to significantly decrease dental caries disease BESIDES fluoride. Classically, toothpaste is not soap --- although some formulations do include a detergent as SLS, but again, not proven to help, and the SLS is there as a foaming agent to help delivery of fluoride to sub-sulcular spaces, ie under the gumline. The paste is nothing but a vehicle for fluoride. Without fluoride, it's worthless. Brushing without fluoride does prevent caries and gum disease --- BRUSHING. If you do not want to use fluoride, then brush with a brush and water. I have my bro brush my niece and nephews teeth (3 yo) with a brush and water. If you do that twice a day and they have low simple sugar contact, they won't get cavities.

Onto the top of fluoride itself. It's the 9th most common element on earth. There is more fluoride in a serving of green tea than a "Serving" of toothpaste or a glass of fluoridated water. The original concept came from a "natural experiment." There was a town in colorado with high F content in the ground water, and researchers noticed lower caries incidence and prevalence. Public fluoridation of water decreased caries in this country by 36%. Anti-F people love to point out that the EU doesn't fluoridate their water, but that's because of their infrastructure, so instead they fluoridate their salt. Now the Harvard paper has been called into question by plenty of entities outside of dentistry, including medicine. Pediatrics has moved aggressively in the last decade to have pedes MDs use fluoride varnish at well child visits. Furthermore, the author's aren't against fluoride toothpaste---they're calling into question over-fluoridation of the public, which is legitimate IN SOME AREAS. It's called the "Halo Effect" of fluoride. Effectively, a kid's water if fluoridated, their public school foods and home food is cooked in fluoridated water, they receive fluoride PO pills at elementary and/or middle school or gel, and their dentist does gel or varnish fluoride treatments, as could their pediatrician. If those all line up, the kids are getting too much, and there has been proposals to lessen the ppm level of F in public water, but the cost of doing so simply makes that not happen. Pediatrics push is not for the kids who are seeing a dentist, their whole varnish wave is to try and catch the kids who DON'T see the dentist. But in general, there's potential for kids to be over fluoridated.

Now, Fluoride has 2 mechanisms, the original concept was that it changes hydroxyapetite to flourohydroxyaptite, which is more acid resistant. However, that's probably trivial. More important is that is catalyses a "nucleation" reaction that remineralizes tooth enamel that's been etched by acids through the day. Since this is the main mechanism, the most important variable for fluoride preventing caries is FREQUENCY. IE brushing is still the best. The high concentration treatments like gel and varnish are an attempt to increase the first mechanism, not nucleation.

Lastly, there are still areas in this country with high levels of fluoride in their aquifers, such as west texas and colorado. In these cities, we do not see an abnormal or outlier concentration of stupid people, bone disease, osteosarcomas, or kids with developmental abnormalities.

If you want to decrease fluoride contact, fine -- but brushing isn't the area i'd do so. That being said, it's probably not going to help you in any way. If you are a regular tea drinker, your intake is significantly higher than a guy who brushes three times a day every day. I drink tea like its water. I brush twice a day with a fluoride paste. I use tap water because it's free and clean. I do not let the dentist gel or varnish my teeth, but i would if I had an impaired immune system, chronic dry mouth, or needed radiation in the area. I have the education, and I do this. You probably don't know better than me.

Someone copy this and repost it every time a F-free paste pops up and this argument is rehashed.

If you dont want fluoride, brush with water.

What's your response to the recent JAMA article on F?
I think it's valid, but it's a cross sectional survey, which is the weakest study and prone to error/being wrong --- so it merits further investigation, like cohorts. But that's their purpose, identify a possible thing and encourage more specific research. The authors did not support removing water fluoridation, and there's been a ton of editorial pointing out errors and issues. But that's the scientific method -- redundancy to disprove. Now we need something more controlled, more supportive of causation and how/why--cohort studies, then maybe clinical trials. But, I think you should limit paste use in toddlers pending their cavity history and risk. Reality is, they swallow the stuff.

There's definitely older forms of fluoride supp we shouldn't use anymore, like ingested NaF tablets, which a lot of older dentists and some county schools still use.

Like I said, I think we over fluoridate, but I support a reduction in the water, not the absence. Removing it in portland has already shown horrible effects on low socioeconomic neighborhoods. Limit it in your toddlers, but 0 is not suggested. Avoiding it in an adult is based on 0 science, but sure, you can likely limit it and be ok. I'd brush with fluoride paste and get a reverse osmosis system, and don't dental treatments UNLESS you're prone to cavities.

I am a dual-trained specialist in Pediatric Dentistry and Orthodontics & Dentofacial Orthopedics and I strongly recommend that parents use fluoride toothpaste on their children. I take fluoride research incredibly seriously because I want to be certain of the evidence if I'm going to recommend it to hundreds of families per year. And I am certain of the evidence after an exhaustive study of the primary source literature in medical and dental journals. Before you buy this product, which will not prevent cavities, I would recommend consulting with your dental provider.

Here is the American Academy of Pediatric Dentistry's policy statement on fluoride. Here is the Cochrane review, which is considered the highest quality and most reliable analysis of the available evidence, on the efficacy of Fluoride toothpastes for preventing dental caries in children and adolescents. Fluoride is a safe and effective way to significantly reduce the risk of cavities in children.

You have been misinformed.

This comment has been rated as unhelpful by Slickdeals users
Joined Jul 2018
L1: Learner
15 Posts
42 Reputation
01-14-2020 at 05:14 PM #45
I'm not copying crap on the internet. I'm a dentist and physician and this is the result of 54,000 hours of training and residency. The pituitary gland has been known for hundreds of years by the way, that's the dumbest thing I've seen in a while. It's literally one of the first studied relays for hormone management. How's that tin foil hat?
Reply Helpful Comment? 1 0
Page 3 of 4
1 2 3 4
Join the Conversation
Add a Comment

Our Community Has a Lot of Thoughts on This 6.6-Lb. Bag of Whey Supplement

Sephora Beauty Insider Review: Are the Rewards Worth It?

Big News! You Can Now Stack Sephora Coupons at Checkout

Get 30% Off Contact Lenses at Walgreens, and Save Even More With Masterpass

How I Saved $473.98 at ULTA Beauty
Copy Code & Open Site More Deals from
Did this coupon
work for you?
Copy
Link Copied to Clipboard