Amazon has Yu-Gi-Oh!: Legacy of the Duelist Link Evolution (Nintendo Switch) on sale for $19.99. Shipping is free with Prime or on $25+ orders. 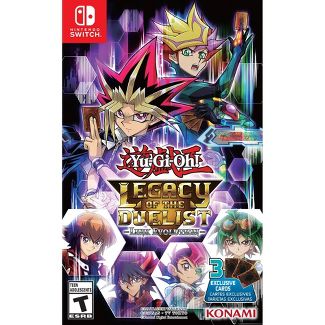 chunlibarbie posted this deal. Say thanks!

Add Comment
Reply
in Video Games (3) Get Target Coupons
If you purchase something through a post on our site, Slickdeals may get a small share of the sale.

Portability and accessibility. Some users lack other consoles, or the time to use them. A game like this can be a massive time-sink.

Reply Helpful Comment? 0 0
Last edited by Peerless_Warrior January 15, 2020 at 07:59 PM.
This comment has been rated as unhelpful by Slickdeals users
Joined Jun 2014
Bargain Hunt Master
128 Posts
22 Reputation
01-16-2020 at 09:31 AM #20
I like the switch for portability also, but you can actually even play your steam games remotely on any other computer or on your phone or tablet anywhere.Another thing is like at work card games are a nice style of game to play while working in an office/PC environment on down time. you cant pull out a switch as people will say wth is he doing, but you can have a window open on your work computer playing..
Reply Helpful Comment? 0 0
Last edited by MiamiHeat3PEAT January 16, 2020 at 09:42 AM.
This comment has been rated as unhelpful by Slickdeals users
Joined Nov 2016
L2: Beginner
62 Posts
22 Reputation
01-17-2020 at 02:13 AM #21
That's an "Extra Zone" for special summoning monsters out of the Extra Deck. Due to a new type of monster extra deck monster called Link Monsters, a new zone was added to the field. While on the field, these monsters have arrows that point to other card zones. Whatever their arrows point to become new "Extra Zones". So if you want to summon more than one extra deck monster, you have to summon Link Monsters so that they transform zones into Extra Zones.

TLDR; The game got fast (because of poorly designed Pendulum Monsters). They tried to slow it down by limiting extra deck monsters like Synchros, Xyz, Fusions, etc to one out on the field at a time. But, they created a monster type (Blue, Link Monster) that breaks that rule. The game got fast again. (Opinion: For returning players, I suspect the game is jank until you get used to it.)

This comment has been rated as unhelpful by Slickdeals users
Joined Dec 2011
Two Minds Became One
6,253 Posts
01-17-2020 at 03:45 PM #23
Rep'd. I really appreciate your informative input, so I'll be sure to experiment later. However, the field should shift based on the absence of newer card types in a deck. There's no logic behind subjecting users to irrelevant rules.
Reply Helpful Comment? 0 0
Page 2 of 2
1 2
Join the Conversation
Add a Comment
Deal Alerts