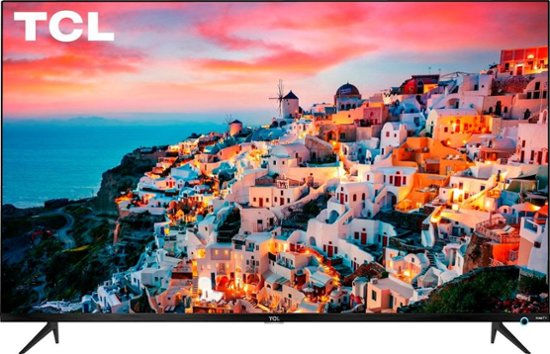 DMBWings29 posted this deal. Say thanks!

Add Comment
Reply
in TV (10) Get Best Buy Coupons
If you purchase something through a post on our site, Slickdeals may get a small share of the sale.

I'm going to make a long post detailing the main reasons why I'm so utterly disappointed in this tv - maybe it will help someone else make an informed decision.

The remote is a toy - tiny and user UNfriendly - and worse, it is on the same frequency as some of my smart lights (WiFi & remote controlled) so my lights change color or mode randomly when using the tv. You cannot change the frequency because it's so end. When watching content via the smart apps/Roku, you cannot scrub. You can only rewind or advance 15sec and must do this repeatedly if you want to go back/forward a minute or longer. To make it worse, the Apps that use cable subscription verification, such as FX, Bravo, etc., which have commercials programmed into the stream (where you can see the hash marks on the timeline) can only rewind or advance to the commercial breaks - with the hash marks basically acting as barriers to rew/ff. So if you need to rewind 5 minutes and a commercial break occurred 1 min earlier, you can only rewind 1 min. The only other option is to rewatch from the beginning.

Another issue for me was that the tv only has 3 HDMI ports. The specs show these ports as all being HDMI 2.2. In contrast, my 65" Vizio 4K TV actually labels the HDMI ports as being 4K 60Hz, 4K 30Hz, and 1080p. When setting up the TCL roku tv 65S425 it seemed to all of us here that the HDMI ports were all 1080p, not 4K, however the TCL did recognize my Apple TV 4K as being 4K HDR (giving me HDR picture modes & settings). Ultimately, it doesn't matter because the picture is so CRAP. We even played around with all possible settings and all the HDR picture modes except "Dark" made the actors' skin look purple and weirdly flushed. Trying to watch "Servant" on AppleTV+, even in 4K HDR, was like looking at a dark, dull, brown-gray screen - so Forget watching GOT on this tv.

The UI is clunky, time-consuming, poorly laid out, totally user unfriendly, and worst of all, HAS ADS! Even customizing the settings to opt out of App suggestions, etc., the TCL keeps suggesting then and/or has ads that never go away. I hate ads on my browser and I just can't tolerate them on my tv.

I have a Vizio Smartcast 5-channel Soundbar System with satellite speakers and a subwoofer. I love it. It has numerous options for connecting it to a tv: Optical, HDMI-ARC/HDMI, Bluetooth, Coax, and Aux. It's also CEC enabled. It works perfectly with my 65" Vizio 4K Smart TV, turning on automatically when the tv is turned on, when the Apple TV 4K wakes up, when casting to the TV and/or my Chromecast Ultra, etc.. But not the TCL Roku TV 65S425. You have to manually select the input on the Soundbar EVERY SINGLE TIME the tv is turned on or there's no sound. The TCL recognizes the soundbar system, it has been discovered and saved in the CEC device list, it is listed under the HDMI-ARC Input Devices, etc., but will not play. Additionally, we had to use the optical audio cable to get the sound to work at all. Despite the TCL recognizing the Soundbar in the HDMI-ARC port and being properly connected, only the optical connection actually functions. I hate the TCL enough without needing to use TWO separate remotes every time I watch tv, having to click through the Soundbar input options as well as spend time to navigate through that awful Roku UI. Just ugh!

The TCL is also unstable and can easily be knocked over. It is much thinner and lighter weight than my 65" Vizio 4K D65-D2 which has kind of a "fat" backside that acted as a perfect counterweight to the often much heavier front screen. But the TCL is much more flimsy than the Vizio and with TVs that are 65-inches and larger, the screen gets taller not just wider, which makes the set unstable, especially since the front screen is the heaviest part. All the weight is distributed towards the front, which extends the full height of the set, creating a situation where it could easily topple forward (especially if bumped). Now this isn't uncommon in larger TVs so it should not prevent anyone from buying, but it's something to consider, especially if you have a cat, baby/toddler/child, or the tv is a high traffic area. This TCL isn't the most unsteady tv I've seen, but it IS significantly less steady than my sane size Vizio.

The "themes" for the UI (in the Roku) are primarily cheap and ugly. Looking at then annoys me and TCL could easily do better.

The TCL also randomly turns the screensaver off and returns to the main menu/Roku TV Home. At first I thought this was a glitch, then I thought I had inadvertently touched the remote, but it keeps happening.

The ONLY things I like about the tv are the aquarium screensaver (the best picture quality on the entire thing and it's still a dim 1080p) and the built-in Apple TV App which allows me to use my Apple TV 4K elsewhere/on a different tv. However, I cannot determine if content streamed using the Built-in Roko Apple TV App actually plays in 4K and/or 4K HDR like it does when using my physical Apple TV 4K device.

I'm absolutely taking the 65" TCL Roku TV model 65S425 back to Target and returning it for a full refund. Thankfully I have 60 days since I paid with the Redcard. In the meantime, I'm furiously searching for a deal on a new tv, 65" or larger.

I'm sad because in 2017 I bought the 65" Vizio 4K Smart TV D65-D2 for $199 at Walmart (during that crazy season of tv deals) knowing nothing about it and absolutely loving it. The picture is AMAZING and it doesn't even have HDR. The speakers are very good and it doesn't even have Dolby Atmos, etc.. It's kind of meant to be moderate, budget-conscious tv. However, the pro ratings are outstanding and I was grateful to have been blessed with such an amazing deal. Now, there's something wrong with the power board or backlight and the screen goers black after minutes of use (sound keeps going, power stays on) and since I only paid $199, SquareTrade just refunded my money instead of repairing or replacing the tv — which is what I would have preferred. I'm still hoping to find someone to fix it.

Anyway, my point is I'm shocked by how inferior the TCL 65S425 is to my Vizio D65-D2 in every way.....especially the picture. It's 3 years newer, has HDR, and on paper, better specs. But it sucks so hard.

I wouldn't waste $280 on the TCL S-Series Roku TV. Having used one now, I don't get why anyone here would like it either. Unless it's just for a spare room? I stream over 1TB of digital content per month, I watch a crap ton of movies/tv, and I need something nice at a slickdeal price I can afford, lol. This TCL is NOT it.
Reply Helpful Comment? 3 3
This comment has been rated as unhelpful by Slickdeals users
Joined Aug 2005
L6: Expert
1,459 Posts
497 Reputation
Pro

Touchdowns Are Better in 4K: Score a Sweet TV Deal Just in Time for the Super Bowl