$1.99
+103 Deal Score
139,269 Views
This particle respirator filters dust and particles, protecting your lungs and throat. The respirator mask has a one-way check valve for easier breathing. 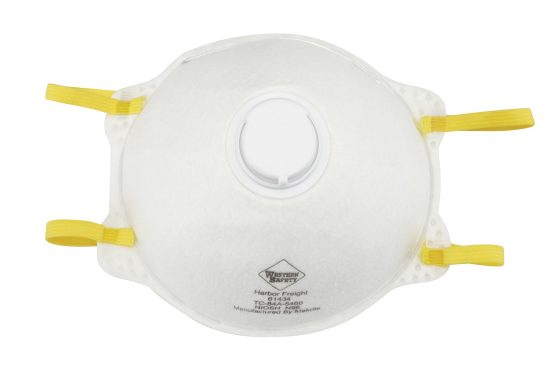 Here I have attached pictures. My order was ship out by FedEx and it came in about 4 to 5 days. MrMasterQ.


A US-Chinese team of researchers created a simulated examination room with mechanized mannequins spaced 6 feet apart to represent coughing and breathing humans. They found that flu viruses floated between the two and were "inhaled" by the breathing mannequin, but that an N95 respirator sealed to the mannequin's face stopped 99.8% of them.
A poorly fitted respirator or a loose-fitting surgical mask, by contrast, blocked only about two thirds of the virus particles.

Assuming the virus infects through the pulmonary system, this is the way to go for protection. Of course, if the virus can enter through the eyes (as another poster said above), that's another story.... (which is a rarer occurrence as the binding molecules required would be different)
Reply Helpful Comment? 31 7
Last edited by Ravenx January 26, 2020 at 09:20 PM.
This comment has been rated as unhelpful by Slickdeals users
Joined Nov 2018
L4: Apprentice
363 Posts
77 Reputation
01-26-2020 at 08:35 PM #8
Believe what you wish.

Healthcare professionals in Wuhan, etc., were using N95 masks, and caught 2019-nCoV anyway. They switched to Tyvek bunny suits with full face shields. If N95s make you feel better, whatever floats your boat.

[for anyone looking to scam people and profit off people's fear, well, FU.]

FDA certifies only the "healthcare" version of N95s:

NOT the usually lower-cost industrial versions sold at Home Depot, Lowe's, etc. Is there a functional difference? No, but the ones "certified" can be priced much higher.

Another scientific opinion, which supports my contention:

The study reported 'no significant difference in the effectiveness' of medical masks vs. N95 respirators for prevention of influenza or other viral respiratory illness.
Reply Helpful Comment? 24 21
Last edited by b-t-1 January 26, 2020 at 08:39 PM.
This comment has been rated as unhelpful by Slickdeals users
Joined Nov 2010
L5: Journeyman
784 Posts
96 Reputation
01-26-2020 at 09:27 PM #9
Slick dealer alright! But a dead one at it.
Reply Helpful Comment? 4 2

Right now, a deadly virus that's already taken the lives of 41 people, is spreading from its origin, China, to the rest of the world. Europe has confirmed its 3 first cases over the last 24 hours along with the U.S in Chicago. With claims that over 250,000 people could contract the Coronavirus in only ten days, it's becoming glaringly obvious the world is facing a significant threat.

Over the past decade, we've been exposed to various hazards that could pose a risk to our safety and security: terrorism, climate crises, and conflict in the Middle East. But the difference between these events and the Coronavirus outbreak is perceived danger: the chance of falling victim to them was a small probability. We were also told the stock market would crash, the death of Iranian General Soleimani would create a full-scale war, and New York would be underwater by 2020. Yet, none of these predictions came true.

This perceived danger has created a sense of fake fear within us. A feeling where we know bad things are happening, but we overlook them as the chance of actually being affected is slim. We know we have yet to be influenced by recent events because we've done nothing in response: the number of terrorist attacks still rises, we still drive our diesel and petrol cars to work, and any tensions in the Middle East subside in a matter of days.

The combination of "boy who cried wolf" scenarios paired with the sensationalist coverage of each and every narrative has prompted the majority of us to let our guards down. We see this everywhere: As people continue to lose their lives to the Coronavirus, others are fantasizing about a global health crisis: sales of the pandemic-themed game, Plague Inc, are soaring and the app is now the sixth most-downloaded in China. Websites and blogs that primarily profit from selling fear are posting real-time updates and, as a result, are receiving record web traffic. Even government bioweapon conspiracies you see exclusively in Hollywood movies are making their way into mainstream media.

Because we are addicted to sensationalization and the fake fear it creates, we are now accustomed to crying wolf, and, consequently, we will fail to react to genuine hazards. What's scary about the Coronavirus is it looks to be the real deal, and the outcome could well be a pandemic. The Black Plague, perhaps the most notable one in history, killed up to 200 million people in seven years between 1346 and 1353 without a globalized world. Nowadays, as a species, we are fully connected and available 24/7 so the virus has the potential — plus the will of mother nature — to spread faster than the Black Plague ever could.

Peanut Butter and Cream: Save Yourself a Trip to the Store with These Amazon Deals

Coors Wants to Give You a Rescue Dog for Cuffing Season

DON'T Pay $250 for the Nest Thermostat 3rd Gen
Copy Code & Open Site More Deals from
Did this coupon
work for you?
Copy
Link Copied to Clipboard