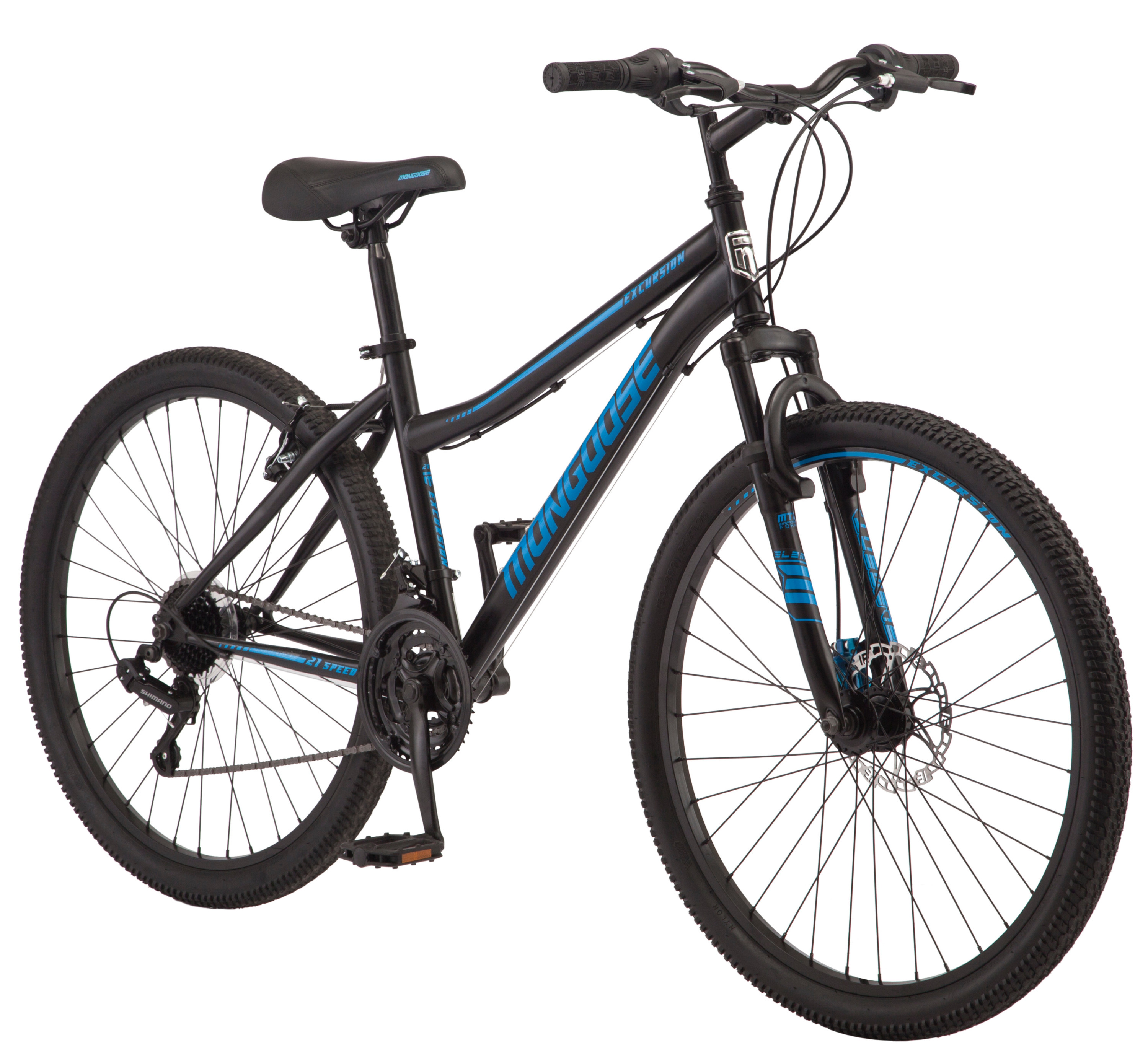 BeigeWren207 posted this deal. Say thanks!

Steel mountain frame with suspension fork to smooth bumps and increase control on the trail.
21-speed with twist shifters and Shimano rear derailleur for precise gear changes.
Front disc and rear V-brakes provide fast, controlled stops.
Alloy rims provide lightweight durability, while the 3-piece crank makes for a reliable power train.
26-inch wheel fits adult riders 5 feet 4 inches to 6 feet 2 inches tall. This bike comes unassembled.
Add Comment
Reply
in Bicycles & Bike Accessories (6)
If you purchase something through a post on our site, Slickdeals may get a small share of the sale.

This comment has been rated as unhelpful by Slickdeals users
Joined Sep 2011
L7: Teacher
2,094 Posts
167 Reputation
02-14-2020 at 10:36 PM #16
If you can tune them up you'll be in good shape. What makes me cringe is Walmart leading people to believe that they are tuned up from the store and ready to go. This is rarely the case. They aren't the easiest bikes to work on but look at that price. Plus you'll have no limit on the amount of cheap upgrades you could add. I worked at a bike shop. We had a ton of used gear from these types of bikes. Most of this stuff was barely even used.

No, these are not mountain bikes. I hope nobody thinks they are. I think the term is now being used to describe a upright position rather than what you could actually ride the bike on.

0
Reply
This comment has been rated as unhelpful by Slickdeals users
Joined Apr 2007
L5: Journeyman
912 Posts
159 Reputation
02-15-2020 at 04:34 AM #17
I have assembled thr bikes myself in the past. They are pretty simple and easy to assemble. If you have the right tools you can do it too.

0
Reply
This comment has been rated as unhelpful by Slickdeals users
Joined Apr 2007
L5: Journeyman
912 Posts
159 Reputation
02-15-2020 at 04:37 AM #18
What does tuning up mean? I purchased cheap Husky bikes from KMART 5 years ago. I have barely used them about 6 times. Every time I want to use them in summer the tires go flat and I fill them up with air and obviously i need to replace the tubes inside them. The seats are hard to sit on and my ass is paining after I have been on the bike for about half an hour. I am not a regular cyclist. The same thing happened with my wife's bike.

I want to buy a good bike now or maybe fix this one. I have greased or lubricated the chain.

So what should I have been doing as to "tune it up"?

0
Reply
This comment has been rated as unhelpful by Slickdeals users
Joined Sep 2016
L3: Novice
101 Posts
18 Reputation
02-15-2020 at 05:03 AM #19
Fine for kids spinning around the block. Don't expect to take them on any serious sort of ride though. You'll get a lot better quality spending the same money (or more, whatever your budget is) on a reputable brand used on Craigslist.

2
Reply
This comment has been rated as unhelpful by Slickdeals users
Joined May 2015
New User
18 Posts
12 Reputation
02-15-2020 at 06:02 AM #21
This would be an ok bike for occasional use riding around the neighborhood. Like others have mentioned, tune it yourself or have a bike shop take a look at it first. Assembly quality is pretty hit or miss.

This bike is for short trips around town and gravel paths.
The tires on my bikes cost more than this.

0
Reply
This comment has been rated as unhelpful by Slickdeals users
Joined Oct 2011
L4: Apprentice
355 Posts
166 Reputation
02-15-2020 at 06:37 AM #24
What bike snobs (and I'm one of them, having paid 4 digits for bicycles in my past) miss is that there's a time and place for cheap department store/big box store bikes. Cheap transportation that you wouldn't want to risk a more expensive bike on. No, you're not going to do serious mountain biking with an $80 bike, but that's also like saying you aren't going to be playing professional tennis with those $20 Costco sneakers. However, those cheap sneakers are great for casual wear, or to get muddy doing yard work, or whatever.

Most big box bikes just require everything to be adjusted and set up. However, some need more in-depth work. Examples:

IN-DEPTH:
One thing I've noticed about big box bikes beyond what is usually talked about is that any bearings which aren't sealed usually don't have enough grease, often just having some light oil in them. This is something that requires some more knowledge and tools than the typical casual cyclist would have. The Walmart assembly person will not care, but this is something that local bike shops will (usually) take care of if you pay them for assembly.
Additionally, big box bikes are usually "one size fits most" and sized according to wheel size, unlike higher end bikes which have multiple frame sizes.
Finally, sometimes changing out some easy-to-swap parts might make riding these things a lot more enjoyable. Note that this isn't exclusive to cheap bikes either! Casual riders may benefit from a more comfortable seat/saddle on most bicycles regardless of bicycle cost or origin.

http://bigboxbikes.com/ is a great resource for talking about these cheap bikes.

Just last year I gave away my early 1990's GT Corrado which had Deore XT parts... and cantilever brakes. Oh the horror!

0
Reply
This comment has been rated as unhelpful by Slickdeals users
Joined Sep 2005
L3: Novice
252 Posts
70 Reputation
02-15-2020 at 07:27 AM #26
So, I went and looked at Dick's. Check out the Nishiki Women's Pueblo.
I think the components on the cheap Walmart Bike might actually be nicer.

So, this seems like a weird place to shop

0
Reply
This comment has been rated as unhelpful by Slickdeals users
Joined Jan 2005
L2: Beginner
47 Posts
29 Reputation
02-15-2020 at 09:48 AM #29
Observations:
1) Folks in this thread are scaring others from making a purchase and it is not due to it being a poor deal. So folks, is this a good deal? Product > Price. What should be upgraded to what? Is there a better product/price combination somewhere else? Educate, don't just hate. :-)
2) Rhetorically, why is the crossbar lowered on a mountain bike targeted to women? Do we expect women to wear dresses on some mountain trail? Wouldn't it be better to make different saddles to account for the real anatomic difference between the sexes, the pelvis (other than stature which is addressed with different sizes) ? I digress.

This comment has been rated as unhelpful by Slickdeals users
Joined Apr 2019
L5: Journeyman
584 Posts
70 Reputation
02-15-2020 at 09:50 AM #30
I once rode a Roadmaster road bike from Walmart for about 5,000 miles in 6 months. Besides the chain falling off and me having to tune everything for about two weeks until I got it just right, the bike was amazing.

I have never gotten Walmart to build the bike for me if you ship to store, nor did I ever hear of friends having luck. They literally just hand you a box.

Make sure the chain is the right length, check the break cords, or even if the brakes are on the correct part of the wheel.

Th bike I currently ride is a 10 speed I found on the side of the road. I ride it over hills and some of the worst roads in the USA. People who spend tons of money on bikes are out of their minds, they will just be stolen.

Deal of the Day: Belkin surge protectors and audio products
2  •  0