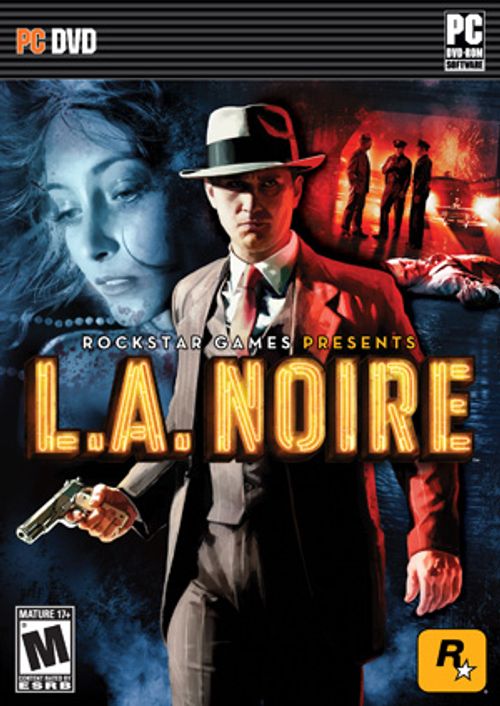 L.A. Noire is a violent crime thriller that blends breathtaking action with true detective work to deliver an unprecedented interactive experience. Search for clues, chase down suspects and interrogate witnesses as you struggle to find the truth in a city where everyone has something to hide. -slickdewmaster

Written by Edited March 2, 2020 at 07:27 AM by
- Story-driven semi-open world detective game set in the 50s, definitely a very specific setting makings this game one of its own
- While released almost a decade ago, L.A. Noire on PC still holds up graphically
- Winner of four GOTY awards
- This edition includes all extra content released for the game; five new cases and two special costumes
- Has an impressive 83 score on MetaCritic

L.A. Noire is one of the most different games in the recent Rockstar Games catalog. Instead of one of their massive open-world titles, L.A. Noire has a fairly big world but the game follows a mission-to-mission structure in which the player will rarely be able to go away from their main objective, allowing the game to focus on delivering its great story to the player.

The player will be playing as Cole Phelps, a LAPD detective who starts climbing the ladder of his career as he solves cases through 50s Los Angeles. Solving a case will involve the player searching for clues, then asking questions and identifying if they're hearing a lie, a half-truth or if the questioned person is being honest through their face expressions and movements. Thanks to the technology used in L.A. Noire, every face in game was scanned thoroughly and each facial move, like for example, a small lip move, could mean something when questioning a character.

The story will progress slowly as the cases goes as Cole and his world start changing. While the ending might look a bit rushed, the game still delivers, and it's definitely one of the most interesting stories told by a Rockstar published title. Plus, the extra cases add an average of five extra gameplay hours and all of their self-contained stories are pretty interesting to follow. They are added as part of the game so you don't need to worry about in which order to play.

This deal beats the historical low from Steam as well any historical low since five years ago according to GG.Deals and it's the current best price on the game.

Need to activate on the Rockstar launcher - not steam.
10 Helpful?
This is by no means one of the best games ever, but I would put it in probably my top 50play before you die lists.

I actually wish there was a sequel to this or another game set in post wwii LA setting. Kind of a Chinatown (the movie) vibe but early 50s.
7 Helpful?
The PC port is a broken, buggy mess. Unless Rockstar has patched it to work with modern systems, avoid it. Save your $3.

Too bad too, I enjoyed this game on 360 back in the day. We don't get a lot of detective games any more.

edit - well maybe not the shooting... or the foot chases... but the story and acting were solid.
5 Helpful?

Partial Controller support means you cannot play it from the couch because you need a mouse/keyboard to navigate the menus. Which is kind of ridiculous considering this was an Xbox 360 game.

I really like Rockstar games but this console port was not their best effort.
Reply Helpful Comment? 5 0

Ghostbusters: The Game Remastered (Xbox One) $11.99