$3
+41 Deal Score
15,937 Views
Various Retailers have Men Without Women by Haruki Murakami (eBook) on sale for $2.99. Thanks AdmiralAsshat 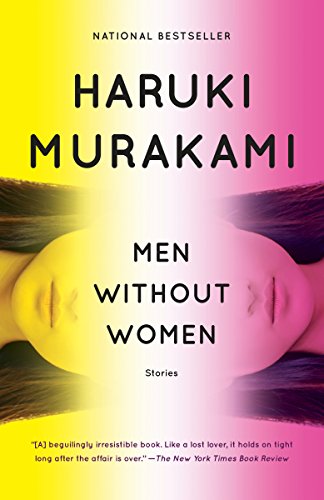 AdmiralAsshat posted this deal. Say thanks!

Add Comment
Reply
in eBooks (6) Get Amazon Coupons
If you purchase something through a post on our site, Slickdeals may get a small share of the sale.

Don't be fooled by the title. This is a very deep book that explores relationships between people. It is not about incels.

Across seven tales, Haruki Murakami brings his powers of observation to bear on the lives of men who, in their own ways, find themselves alone. Here are lovesick doctors, students, ex-boyfriends, actors, bartenders, and even Kafka's Gregor Samsa, brought together to tell stories that speak to us all. In Men Without Women Murakami has crafted another contemporary classic, marked by the same wry humor and pathos that have defined his entire body of work.


NATIONAL BESTSELLER
One of the Best Books of the Year: The Washington Post, NPR, and Esquire

"[A] beguilingly irresistible book. Like a lost lover, it holds on tight long after the affair is over." —The New York Times Book Review

"Classic Murakami. . . . [His] voice—cool, poised, witty, characterized by a peculiar blend of whimsy and poignancy, wit and profundity—hasn't lost its power to unsettle even as it amuses." —The Boston Globe

"Intimate, captivating and poignant. . . . A short story is brief enough to be perfectible—and Men Without Women showcases that." —The Kansas City Star

"Affecting. . . . Murakami is a master of the open-ended mystery. . . . His meandering, mesmerizing tales of profound alienation are driven by puzzling circumstances that neither his characters nor readers can crack—recalling existentialist Gabriel Marcel's assertion that 'Life is not a problem to be solved but a mystery to be experienced.'" —The Washington Post

"Each of the seven stories here [is] a gem in and of its own right, but strung together they're a sparkling strand of precious stones, the light refracted from each equally brilliant but the tones varying subtly. . . . I have something of a love/hate relationship with short stories. Too many mediocre offerings leave me despairing of the genre, but then a collection like Men Without Women comes along and all is forgiven, my faith restored in the recognition of how utterly perfect the medium can be—in the right hands." —Lucy Scholes, The Independent

"The best of these stories hold the excitement of a quest: These odd episodes of awakening desire show men startled into an awareness of how they have shorted themselves on life." —Minneapolis Star Tribune

"Murakami's greatest strength is his creation of environments just eccentric enough to wrong-foot you—not exactly magical realism, but perhaps enigmatic realism. . . . When his writing is at its best, his characters act as a fisheye lens through which to scrutinize a slightly off-kilter world that surrounds them." —The New Republic

"Masterful. . . . The mundane gives way suddenly, like an ice floe cracking under our feet, only to reconstitute itself a moment later and swallow up that brief glimpse of what lies below." —Vice

"A whimsical delight. . . . Sanity might be overrated, but Murakami is surely not." —The Christian Science Monitor

I haven't read this collection yet, but I would be surprised if "a book about incels" is a particularly appropriate description.
Reply Helpful Comment? 12 10
This comment has been rated as unhelpful by Slickdeals users
Joined May 2015
L9001: Lurker
2,671 Posts
353 Reputation
03-17-2020 at 03:22 PM #9
Will this be the first non-negative comment in this deal? *rolls the dice*
Reply Helpful Comment? 5 8

Don't be fooled by the title. This is a very deep book that explores relationships between people. It is not about incels.
Reply Helpful Comment? 9 4
This comment has been rated as unhelpful by Slickdeals users Show Post
HIDDEN 03-17-2020 at 07:32 PM
This comment has been rated as unhelpful by Slickdeals users
Joined Aug 2007
L6: Expert
1,738 Posts
134 Reputation
03-17-2020 at 07:32 PM
Well, that is to be expected Anywhere one sex heavily outnumbers the other. The only way to win is not to play. I learned this a long time ago in an all male HS. I quickly found out I liked hanging out in an all female HS a lot better......it was called theater. 🤒
Reply Helpful Comment? 1 8
Page 1 of 2
1 2
Join the Conversation
Add a Comment
Deal Alerts

FREE access to historical records and educational resources on Ancestry.com
7•6

Up to 50% off Amazing Style at Mango’s Online Sale
Copy Code & Open Site More Deals from
Did this coupon
work for you?
Copy
Link Copied to Clipboard