Note: Game will activate/play via Steam. 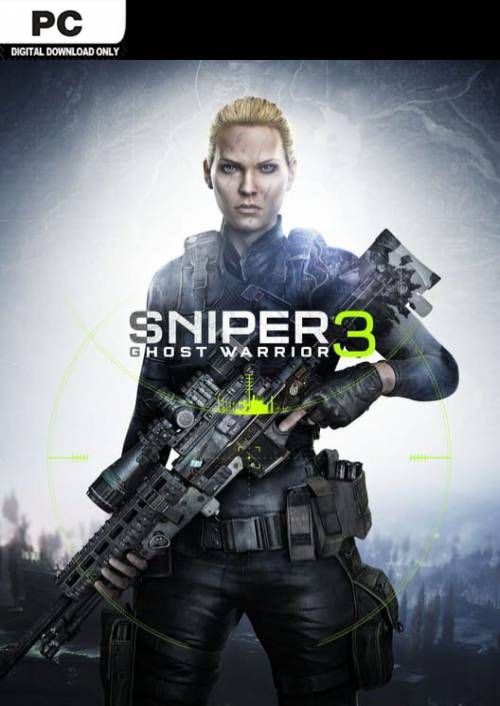 Game Description: Go behind enemy lines with the ultimate modern military shooter. Play as an American sniper dropped in Georgia, near Russian border. Choose your own path to accomplish your missions across an unforgiving open world.

Written by Edited April 1, 2020 at 07:37 PM by
Sniper Ghost Warrior 3 tells the story of brotherhood, faith and betrayal in the most complete sniper experience ever. Take the role of an American sniper named Jonathan North, who is dropped into enemy territory in northern Georgia, nearby Russian borders. Explore large open-world maps with dynamic weather and a day and night cycle that actually impacts play and decisions. Customize weapon equipment, accessories, vehicles and a drone, and utilize the three pillars of gameplay to your liking: Sniper, Ghost and Warrior.

Go behind enemy lines with the ultimate modern military shooter. Play as an American sniper dropped in Georgia, near Russian border. Choose your own path to accomplish your missions across an unforgiving open world.

Be a Sniper: Engage your targets from the long range. Factor in scope elevation, wind speed and direction, breath control and stance along with weapon and bullet choice.

Be a Ghost: Stalk your enemies and eliminate them silently with a broad variety of takedowns. The advanced stealth gameplay includes drone recon and vertical navigation.

Be a Warrior: Wield a wide variety of advanced weapons and modify them to suit the needs of your mission and your own personal style. Choose from assault rifles, shotguns, machine guns and even explosives.

Be All Three: You are an American sniper dropped behind enemy lines in Georgia, near the Russian border. Ruthless warlords have taken over part of the area and it falls on you to prevent the entire country from collapsing into chaos.

https://www.cdkeys.com/pc/games/s...3-steam-pc
Add Comment
Reply
in Computer & PC (3) Get CDKeys Coupons
If you purchase something through a post on our site, Slickdeals may get a small share of the sale.

So just picked this up and put 2 hours or so in. Seems to be pretty fun so far it's a bit like Far Cry in that there's a similar map that is open world and has small side missions along the way and outposts you have to clear as well as a main story and objectives. It has similar customization to something like The Division where you have a safe house and can upgrade your weapon, craft items, upgrade your skill tree, etc. I typically like to get at least 1 hour per dollar spent on a game and I will for sure get that out of this. I have a GTX 1070 and a 6700k and get around 60fps on 1440p on high settings. Thanks
I need help with this comment