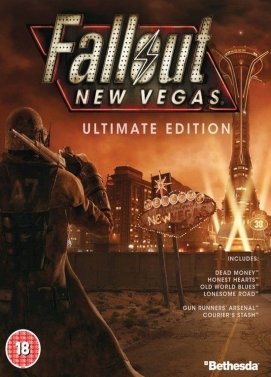 
Beyond the Wasteland: The world of New Vegas is more expansive than ever. Each new distinct area presents a fresh set of branching-quests, remarkable personalities and more chances to play the Savior or the Pariah to the natives of New Vegas.

Shiny New Toys: Each add-on pack increases the mountain of armaments already at your disposal. Whether you're an in-your-face brawler or a long-range gunner, weapons such as the Two-Step Goodbye (unique ballistic fists) or Sleepytime (a handy 10mm Sub-Machinegun) will give that warmonger in you a chance to flex your ammo-filled muscles.

Room to Grow: With each of the four main add-on packs, the maximum levelcap is increased by 5 levels, ultimately raising the ceiling to Level 50.

Dead Money: Lured into a trap masquerading as the Sierra Madre Casino, you are thrown into a high stakes game where you'll have to work with three other lost souls if you want to survive.

Honest Hearts: An expedition into Utah's Zion National Park goes horribly wrong and you become embroiled in a war between tribes and put into a conflict between a New Canaanite missionary and the mysterious Burning Man.

Old World Blues: Transported to the Big MT research crater, you are enlisted by the Think Tank to save them from their own science experiments that have gone horribly out of control.

Lonesome Road: Ulysses, the original Courier Six, contacts you and promises to answer why he refused to deliver the Platinum Chip at the start of Fallout: New Vegas, but only if you make one last journey into the treacherous canyons of the Divide.

GOG has it for $5.99. 50 cents more, but no steam and DRM free. You also get Elder Scrolls Daggerfall and Arena for free. Old games, but cool.

https://www.gog.com/game/fallout_...628dc194c5
Not sure if you are trolling... If not...Do yourself a favor and buy it. There is so much to explore here. It's Skyrim with guns. Huge fan of the series, except for Fallout 76.
Big ironnnnn
big ironnnnnnn

Yeah, thanks. I realize and he's aware. I think the kids call it potato graphics these days? lol. I know he plays Garry's Mod.
Pretty sure he just wants to play it for the story, which is great from my perspective, just need a solution for the over the top violence.
1
0
0
2
Reply
This comment has been rated as unhelpful by Slickdeals users
Joined Dec 2018
I cook, you eat. Done!
204 Posts
64 Reputation
04-10-2020 at 06:15 AM #13
If I'm reading this correct, you are looking for gore removers/filters for the PC version. There are a number on the nexus to choose from...here is a link to a gore search on the nexus.

As far as the "look" of the game, there are texture packs, enhanced models, new models, overhauls and more. Fallout New Vegas has over 21 thousand mods on the nexus, making it the 4th most. If there is something you want or don't want for the game, it is probably there, or at least close to it.

Be safe,
0
0
0
0
Reply
This comment has been rated as unhelpful by Slickdeals users
Joined Apr 2011
Expert in Sarcasm
1,381 Posts
311 Reputation
04-10-2020 at 06:15 AM #14
There are graphics mods for that. But the story and gameplay is just superb. I install a bunch of follower and extra NPC mods, a mod that allows multiple followers following you, and the ability to recruit anyone so that I can have a small army following me everywhere, with power armor and everything. They still die when getting into big firefights, but it makes the game even more fun...to me at least. But yea I love this game...much less glitchy than Fallout 3.
2
0
0
0
Reply
This comment has been rated as unhelpful by Slickdeals users
Joined Dec 2018
I cook, you eat. Done!
204 Posts
64 Reputation
Our community has rated this post as helpful. If you agree, why not thank ?
04-10-2020 at 06:24 AM #15
GOG has it for $5.99. 50 cents more, but no steam and DRM free. You also get Elder Scrolls Daggerfall and Arena for free. Old games, but cool.