$159.99
+29 Deal Score
19,338 Views
Woot Closeouts has the Mellow Sous Vide Precision Cooker: Smart Slow Cooking Machine with Refrigeration for Home Kitchen with WiFi 20% off for the next 18 days, or until they sell out.

MAKE AMAZING MEALS SIMPLY: Mellow makes it simple to create amazing meals using sous-vide, a method of slow cooking in a temperature-controlled bath once limited to top chefs in the best restaurants.

FROM ORDINARY COOK TO EXTRAORDINARY CHEF: Mellow's in-app assistant chef with detailed recipes makes it easy to cook your meal to perfection every time. Choose from a broad range of categories, including health-conscious meals with extraordinary taste.

MEALS READY WHEN YOU ARE, WITHOUT THE FUSS: Let Mellow know when you want your meal to be ready, and then drop it into the cool water bath. Chill the water bath ahead of time using the Pre-Cooling feature or immediately using the Add Ice feature. Mellow's patented refrigeration will keep the food safely chilled until it's ready to start cooking, and then automatically heats the water at the right time so your meal is ready when you are.

SAVE TIME AND ENERGY: Everything you need to make amazing meals in one sleek solution. Easy-clean proprietary double-walled water container with efficient heating and cooling help keep cleanup simple and energy bills low.

STAY FLEXIBLE: Running late? Built-in wifi connectivity allows you to adjust your Mellow's temperature and cooking time on your smartphone from anywhere. Available on iPhone or Android.

I own a Mellow. I've been using it for a little over 6 months. I really like using it for smaller things as it's way more compact and is ready to go, as opposed to hauling out my Anova wands. It also produces a whole lot less radiant heat in my kitchen due to the double walled cooking container.

I have no problems at all recommending as a supplemental Sous Vide system. I'd still recommend getting an inexpensive Sous Vide wand for the flexibility of being able to cook many more, or much larger sized food items than you can cook in the Mellow.

However if I just want to drop in a vacuum sealed bag of steaks, pork chops, etc for dinner, then the Mellow already tucked away on my kitchen counter is a whole lot easier to deal with! I have also been experimenting with infusing various alcohols via Sous Vide, and it really is a lot easier to accomplish in the my Mellow.

Now onto the caveats...

I no longer use the chilling part of the Mellow cooking system. On the surface it's one of the "coolest" parts of the Mellow having a powerful little Peltier cooler keep your food refrigerated and safe in the Mellow waiting until it's time to start cooking, but from what I've read in the Wired article that I know someone will link to in a comment, there are food safety issues as your food goes from refrigerated to its optimal cooking temperature.

This brings us to the last issue... The app. If you aren't using cooling part of the Mellow, then the built in recipes won't work because the Mellow wants to chill everything first, and then heat the water. I want to skip the chilling step. So you pull up the recipe, get the cooking temperature and time you need (I am a BIG FAN of the Mellow's ability to set temperatures in tenths of degrees for even more cooking precision!), and then enter it in via the manual settings portion of the app. Once the water is at the correct temperature, I put my vacuum sealed bags in the Mellow, and away I go! I just wish there was a checkbox to choose to use the chiller or not in each recipe.

Even with its caveats, there still is a lot to like about the Mellow. At this price, it's a fantastic addition to your Sous Vide arsenal.

Of note: That whole reducing the radiant heat generated while cooking Sous Vide is a big deal. Especially in the summer months. Having a giant radiant heater running for hours, or days in your kitchen will definitely make your AC work harder! 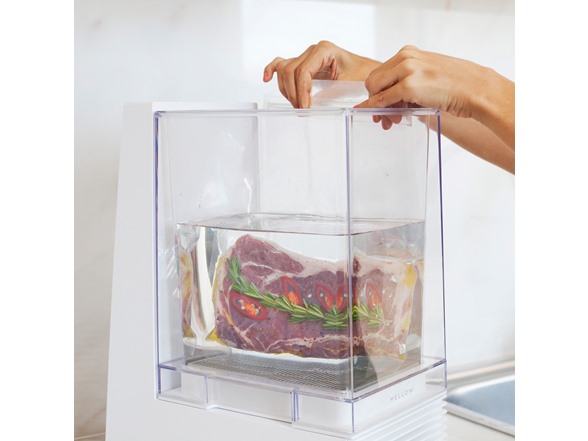 Last Edited by wineaux May 13, 2020 at 08:41 AM
Added pictures and more details to the OP from the SD full website browser version of the site because after more than 5 years SD's mobile app and site still sucks and won't let you perform basic deal posting functions like adding a damned picture!
Link to this Wiki
Want more deals like this? Create a deal alert for Small Appliances.
Add Deal Alert for Small Appliances

I'm just hoping i can learn something just from watching .

Anova cullinary is a great resource in regards to recipes too.

I've been borrowing a friend's sous vide and really wanted to spend less then $100. Anyone with experience with the posted sous vide?
1
0
0
0
Reply

This comment has been rated as unhelpful by Slickdeals users
Joined Oct 2017
New User
12 Posts
14 Reputation
05-13-2020 at 09:05 AM #10
Sous vide is a great way to cook a bunch of things, and I'm sure this is a good unit, but most people will prefer an immersion circulator type machine that is easier to store and works on a variety of sizes of container.

Our community has rated this post as helpful. If you agree, why not thank ?
05-13-2020 at 09:08 AM #13
It just isn't an issue. Nothing leeches out of the food safe vacuum seal bags. Nothing affects the flavor, and no chemicals are getting into your food. It is safe. There is no need to worry.

I'll also point out that if you eat steaks at any sort of restaurant which cares about their steaks, then you have eaten food cooked in a plastic bag, because every steakhouse worth their salt cooks their steaks Sous Vide to rare in advance, and then refrigerates them to use later. Why? Because once cooked Sous Vide, that steak will stay food safe for 21 days, so they aren't tossing out meat that has been sitting in the walk-in too long. Better steaks, plus lower food costs. Do the maths.

Treat Yourself to These Affordable Luxe Cotton Bedding Sets for Under $100
Copy Code & Open Site More Deals from
Did this coupon
work for you?
Copy
Link Copied to Clipboard