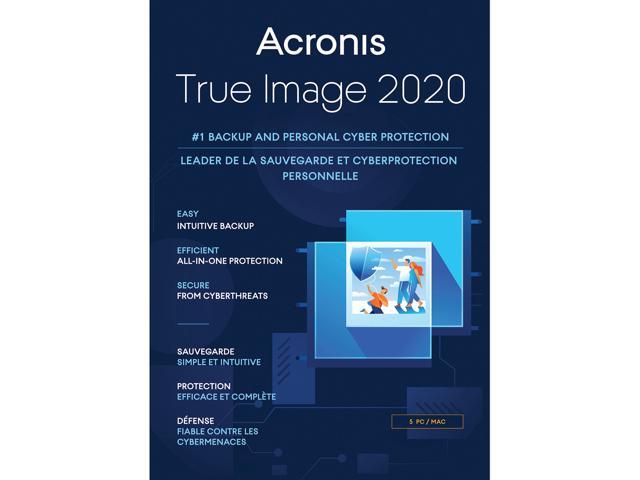 sr71 posted this deal. Say thanks!
Add Comment
Reply
in Software (5)
If you purchase something through a post on our site, Slickdeals may get a small share of the sale.

Interesting how they sprinkle their product around to get you to buy a full version, which I'll do thanks to this posting, good advertising. Although there are a fair amount of neg reviews floating around.

Bought a WD Blue SN550 NVMe last week for my Dell Optiplex 5040. WD offered their crippled Acronis version for download which I did. My idea was to clone my current OS to the WD then clone/backup my NMVe SSD drive to a current installed Samsung 1TB SSD drive without having to backup to an external USB drive taking most of the night. SSD to SSD backup should be very fast.

WD tech said I could even take the backup target drive and install it in another computer without worry of the CPU serial number being embedded in the backup. But another tech said that I should never have 2 exact clones running at the same time as it will confuse the computer as to what is the correct drive. That's why I want the full version for backup so I can use whatever method that works for me.

End of Acronis comments. If anyone wants to read the rest of the story it follows...

A caveat that caught me, I was acting typically geeky and downloaded everything before installing the drive. Ran Acronis, looked nice then installed the drive. Started Acronis again and it wouldn't run. Lots of researching says you need to have a WD drive installed for Acronis to run but why did it install earlier without the WD in the computer? Seems when I pulled all the cables off the desktop I also removed the WD Elements external drive that usually stays connected for sharing files with friends. Acronis saw THAT drive and installed earlier. Uninstalled Acronis but still wouldn't reinstall with the new WD drive in. This was confirmed by WD support and required a remote session so they could download and run a Proprietary software patch so Acronis would install again.

Now I have to study what BIOS changes need to be made to get the most out of the drive. Some settings are suspect but need to be studied before I dare change them which I haven't done for some time. Here are some options I might have to change and what their settings are at present.

If I recall when making an adverse BIOS choice that causes a failure to boot I'm offered a choice of last known good to start or is that just to start the OS after the BIOS is finished. If not and I make a bad BIOS change that crashes, how does one recover and reverse the BIOS change? Sadly there's not much specific BIOS information, from Dell or even on YouTube.

05-21-2020 at 04:26 PM #12
Yes, Acronis will work as long as it detects the Elements drive.
So the trick would have been
- image original NVMe to Elements.
- create a portable USB or bootable CD. (rescue media)
- swap NVMe with WD Blue
- boot off portable or bootable with Elements connected
- restore to WD Blue NVMe

make a snapshot of your current bios settings.
tweak as desired noting each change.

Sabrent and Crucial both have OEM Acronis.
Both should allow you to create image and rescue media (Crucial definitely).

The full version allows you to schedule things a little better. And restore from any version of Acronis.
But the rescue media will handle most jobs as well - that the trick.

0
0
0
0
Reply
This comment has been rated as unhelpful by Slickdeals users
Joined Jul 2008
L4: Apprentice
319 Posts
05-21-2020 at 05:35 PM #13
Thanks for the nice reply. I kept looking at the Newegg Acronis full edition and thought at $6/copy, why not. So an empty box is on its way with 5 serial number inside I guess. The WD tech guy who removed the Acronis traces raved about it but why not as they do offer the crippled version for free. Good merchandising promotion.

I just need to settle down and study the Dell bios and as you suggest, make one change at a time and cross fingers. I'm just afraid I'll make a real important change and next boot will be dozens of error beeps then a black screen.
0
0
0
0
Reply
Page 1 of 1
1
Join the Conversation
Add a Comment
Deal Alerts

CyberLink Director Suite 6 Review - Is it Right for You?

How to Use the Target App to Boost Your Savings