click on Choose your free Camera with purchase of this kit and select E-M1X Body for free. There are 2 other camera's also available to select for free, but that one is the better option IMO. 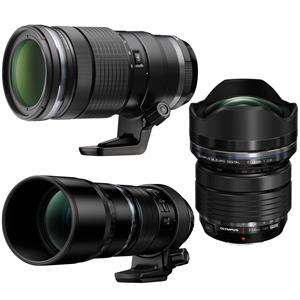 Last Edited by iconian June 1, 2020 at 02:42 PM
also available at b&h photo [bhphotovideo.com]
Link to this Wiki
Want more deals like this? Create a deal alert for Cameras.
Add Deal Alert for Cameras

as such, MFT system will require fast lens to help resolve this issue. ideally you would need a comparable lens thats 2 stop faster. and here is the problem: good fast lens are expensive. this applies to all cameras system, it is just particularly more important for MFT.

for example. a regular olympus 40-150 F4.0-5.6 lens is 99 dollar all day everyday, an olympus 40-150 F2.8 (about 1 to 2 stop faster depend on focal length) is 1500 dollar. this is because aperture is a function of the focal length and diameter of the iris. larger aperture (faster lens) require much larger openings, meaning much more glass, and much better glass.

you are still getting a bargain compared to full frame. a 600 mm F4 cannon EF lens be 4 times as large, wieght 4 time more and cost 4 times as much (priced at 13k). of course it also gathered 4 times more light on the FF body but you got the idea here.

that said, i think the entire pro series lens aren't making too much sense for MFT (i have the entire collection of olympus MFT premium prime lens). MFT system itself is a compromise. it is small enough, cheap enough, and light enough for everyone to pick up and have fun. the pro lens cost arm and leg, they are as large, and weight as much as their full frame counter parts and you still won't be able to overcome the inherent flaw of a smaller sensor. if i have to pick up a lens that is over 500g in weight, i might as well just use my cannon full frame to get the better picture.

What to Look for in a Camera Tripod
Copy Code & Open Site More Deals from
Did this coupon
work for you?
Copy
Link Copied to Clipboard