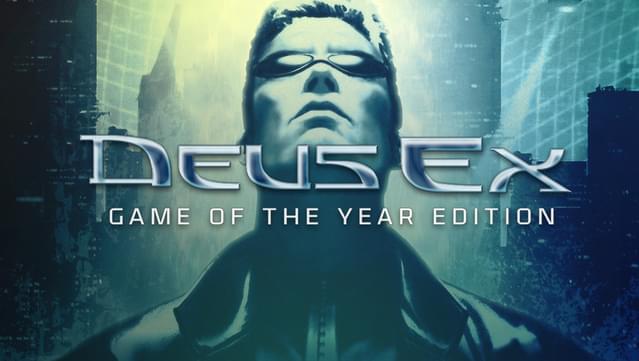 geektech posted this deal. Say thanks!

https://www.gog.com/game/deus_ex
Add Comment
Reply
in Computer & PC (2) Get gog Coupons
If you purchase something through a post on our site, Slickdeals may get a small share of the sale.

I think most who've grown up on games made in the last few years would not be able to stomach the graphics, gameplay mechanics, voice acting etc of Deus Ex 1. But for those who lucked out and played it in 2000, this game was revolutionary and an unforgettable experience. I played it 4 times from release until around 2015. Last time was with many graphical enhancing mods like Revision and High Def packs etc (website: moddb) which seemed necessary in spite of nostalgia.

My friend who didn't play it when it released, tried it around 2010 but couldn't get past an hour because of the graphics and a couple of other things. He probably also seeked reasons to not like it because of my undying infatuation with it (a strange phenomenon many other people share too) But when Deus Ex: Human Revolution came out, he played it and it's now his top 2 favorite games ever. And that game was a remix of DX1 in many ways. So if not this, definitely keep an eye out for DX:HR before that gets dated too.

This comment has been rated as unhelpful by Slickdeals users
Joined May 2007
L4: Apprentice
422 Posts
206 Reputation
06-18-2020 at 05:48 PM #38
The first level is very hard - my first play through I died a ton of times. I would suggest the tranquilizer gun. You can't hit the broad side of a barn when you start the game (especially when you're moving) and if I recall there's not a lot of ammo. So instead of moving and shooting and missing, you stay still, isolate the enemy, tranq him and move on. I had success through the rest of the game by gradually putting my skill points into the hand pistol and upgrading with things like the silencer.

The soundtrack is good (Hong Kong music and UNATCO theme are fan favorites). There's a folder full of .umx files - those are the music files. Play them with XMPlay. There's also fan made remaster and remix albums:
https://www.dx-revision.com/in-de...oundtrack/
https://augment.ocremix.org/
Also check out youtube and search 'deus ex remix' or 'deus ex cover' and you will for sure find some good stuff.

If you get stuck I was gonna recommend the below site (I used 10 years ago) but seems to have disappeared. This kind of guide (pictures + text) is MUCH better than wasting time on youtube videos or text only guides like gamefaqs. If anyone has it saved you should upload it:
http://www.visualwalkthroughs.com...deusex.htm
This looks like a decent alternative but seems pretty light on pictures:
https://deusex.fandom.com/wiki/De...alkthrough

Finally - I remember this game having this worst controls ever for climbing/dismounting ladders (an underground or sewer like scene in particular I still have bad memories of).
0
0
0
0
Reply
This comment has been rated as unhelpful by Slickdeals users
Joined Oct 2008
L6: Expert
1,989 Posts
485 Reputation
06-18-2020 at 06:15 PM #39
I started playing Human Resistance a couple months ago and at first i hated the game play but i kept played it got better quickly. Despite it being 8 years old I am playing it regularly.

It was insanely predictive of governmental overreach and loss of freedoms, too. We pretty much live in the dystopian world they made fiction of.
1
0
0
0
Reply
This comment has been rated as unhelpful by Slickdeals users
Joined May 2007
L4: Apprentice
422 Posts
206 Reputation
06-18-2020 at 08:17 PM #41
In case anyone cares I was able to locate partial archive of this guide but almost all of it is not there:
http://archive.fo/AIk5C
Based on the below it looks like only the links for Hong Kong (1) [archive.fo]andParis (2) [archive.fo] work.
http://archive.fo/www.visualwalkthroughs.com