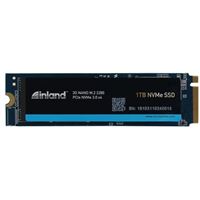 sr71 posted this deal. Say thanks!
Add Comment
Reply
Created 06-19-2020 at 11:34 AM by sr71
in Hard Drives (3) Get Micro Center Coupons
If you purchase something through a post on our site, Slickdeals may get a small share of the sale.
Deal
Score +19
7,735 Views
$99.99
See Deal
Want more deals like this? Create a deal alert for Hard Drives.
Add Deal Alert for Hard Drives

QLC will likely replace TLC as the "Consumer Option" just like TLC replaced MLC several years back. For most people, this won't be an issue as they will find the right combination of SLC-caching and DRAM buffer to accommodate most heavy writes. While I'm hoping we see good TLC NVMe drives hit the $100/TB mark again, I wouldn't be surprised if we didn't. TLC will probably become top-shelf models only going forward.

Remember that NAND manufacturers don't really compete with each other as much as they all try to attain a specific unbalance of supply and demand. It benefits them to have a higher demand than supply, as they can justify charging more while producing less.

If not convinced, look at how many times these companies have been sued for price-fixing.

I think I might get one at that price. If I can confirm it's not likely to have issues with my laptop.
1
0
0
0
Reply
This comment has been rated as unhelpful by Slickdeals users
Joined Sep 2013
L9: Master
4,294 Posts
626 Reputation
07-07-2020 at 03:05 PM #19
I don't think the price increase is because of the new consoles. I think it is due to the trade agreements and shutdowns due to the pandemic. Supply is short and the cost has gone up so the price is up for end users/ consumers. Seriously last year SSD prices were so low and getting low at such rapid speed it was kind of hard to keep track of deals. Glad I stocked up a few and scored some nvme/m.2 (various) 1tbs for $80-100 range and some sata 1tbs for $45-50. I don't think we will see those prices ever again.
1
0
0
0
Reply
This comment has been rated as unhelpful by Slickdeals users
Joined Jul 2014
L7: Teacher
2,376 Posts
640 Reputation
07-07-2020 at 03:25 PM #20
I'm sure those things are partly to blame, but both are also less permanent than them being more widely used than ever before. The Pandemic slowed production down a month or 2 beyond Chinese New year, but people weren't buying as much then either. The biggest problem after they got back to production in China was shipping.

As for trade wars, most of these companies aren't based in China, and could move manufacturing anywhere. "Cheap Chinese Labor" isn't nearly as cheap as it used to be, and most of the cost isn't saved on the workforce, it's saved through tool-engineering and automation. There's nothing done in China that couldn't be done almost anywhere else.

On the other hand, if you bought a laptop a year or two ago, particularly budget-midrange, there's a good chance you would have a platter drive in it. Fast forward to about last summer/fall to present, finding a new sub-$600 laptop without an SSD is not nearly as common.

As for consoles, they will-be/are making a dent in NAND supply. That's a device that never used them before, and between the Xbox and PS5, they will probably sell 4 to 6 million consoles in the span of about a month, and will only sell that few because of supply shortages. That's >6 Million TBs worth of NAND not going into anything else.
0
0
0
0
Reply
This comment has been rated as unhelpful by Slickdeals users
Joined Sep 2018
New User
15 Posts
10 Reputation
07-15-2020 at 11:28 PM #21
Picked this up at Microcenter for 89.99. Perfect for my kid's pc. He won't need the TLC version any time soon lol
0
0
0
0
Reply
Page 2 of 2
1 2
Join the Conversation
Add a Comment