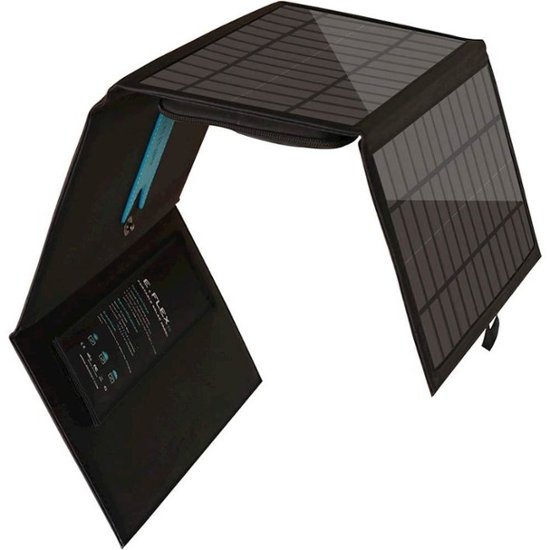 sr71 posted this deal. Say thanks!
Add Comment
Reply
Created 06-20-2020 at 03:01 AM by sr71
in Sporting Goods
If you purchase something through a post on our site, Slickdeals may get a small share of the sale.
Deal
Score -6
744 Views
$70.00
See Deal
Want more deals like this? Create a deal alert for Sporting Goods.
Add Deal Alert for Sporting Goods

06-20-2020 at 04:23 AM #3
Wear this instead of your tin foil hat...that way, when the government ties to mess with your brain they will instead just be charging your cell phone.

Great way to stick it to the man!

0
0
0
4
Reply
This comment has been rated as unhelpful by Slickdeals users
Joined Oct 2008
L7: Teacher
2,358 Posts
1,216 Reputation
06-20-2020 at 05:54 AM #4
I suspect it is very comparable. Take that 30-watt advertised stat with a grain of salt. These folding portable solar chargers are all sourced from China, use fairly standardized panels and are likely coming from the same few factories. Different companies slap their brands on them, and make their own marketing decisions on what artificial test conditions to use to generate these fanciful performance numbers.

Given that the Ravpower of similar (if not identical) real world capability seems to regularly go on sale for $40 or so, I'd say this Renogy E.FLEX is actually not a very good deal. About the only advantage I can see from getting this one from Bestbuy is that it might be easier to do a return if you're not happy with the product.
3
0
0
1
Reply
This comment has been rated as unhelpful by Slickdeals users
Joined Dec 2015
L1: Learner
42 Posts
18 Reputation
06-20-2020 at 08:06 AM #5
I have a RavPower solar panel, so I'll provide some comparisons:

•My RavPower comes with something similar to the advertised iSolar feature.
•My RavPower doesn't include an MTTP controller to optimize the charging power in less than optimal conditions. It's unlikely this Renology does either, because that would be a strong selling point, but if it did that could more than explain the price difference and be a huge value.
•My RavPower does NOT resume charging an iPhone if the charging current dips below the iPhone's optimal threshold. If the Renology panel does as advertised, that is a nice feature. I try to get around this by connecting to power and THEN shutting the iPhone off (slide to power off, not just sleep the screen), but I still think it's best to charge a battery bank.
•My RavPower is rated for I think 21W, but in the manual it states that each USB port will only supply up to 12W.
•My RavPower only has 2 USB ports (and I kind of wish one of them was a DC charging socket), while this Renology has 3 USB ports.
•My RavPower does not have any built-in kickstand features. Holding the panel angled directly towards the sun makes a significant difference (laid flat its almost as if it wasn't charging at all). I tried to prop it up against chair legs and trying to hold it in place with small rocks, but light breezes still knocked it over and I was forever having to go back out and fix it.
•Even in optimal config, you will only get up to one cellphone charge per day, this would not be enough for a power station with more mAh/Wh to recharge in a day.


Conclusion: The Renology has 3 USB ports, but I don't if each USB port can supply more than 12W max (which would be like recharging an iPad at the wall), and I would actually consider the kickstand to be a significant benefit. I like the concept of Solar, and my RavPower panel does work but it's so hard to keep "powering" that I haven't used it after testing it a few days.
0
0
0
2
Reply
Last edited by EverettM1119 June 20, 2020 at 08:13 AM.
Page 1 of 1
1
Join the Conversation
Add a Comment