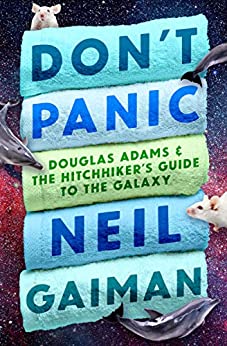 Douglas Adams's "six-part trilogy," The Hitchhiker's Guide to the Galaxy grew from a blip of a notion into an ever-expanding multimedia universe that amassed an unprecedented cult of followers and became an international sensation. As a young journalist, Neil Gaiman was given complete access to Adams's life, times, gossip, unpublished outtakes, and files (and became privy to his writing process, insecurities, disillusionments, challenges, and triumphs). The resulting volume illuminates the unique, funny, dramatic, and improbable chronicle of an idea, an incredibly tall man, and a mind-boggling success story.

In Don't Panic, Gaiman celebrates everything Hitchhiker: the original radio play, the books, comics, video and computer games, films, television series, record albums, stage musicals, one-man shows, the Great One himself, and towels. And as Douglas Adams himself attested: "It's all absolutely devastatingly true—except the bits that are lies."

Updated several times in the thirty years since its original publication, Don't Panic is available for the first time in digital form. Part biography, part tell-all parody, part pop-culture history, part guide to a guide, Don't Panic "deserves as much cult success as the Hitchhiker's books themselves" (Time Out).

the ebook and audiobook for these are available on the Libby app if your local library participates, FYI.
And if you install and set up the Library Extension [libraryextension.com] (for Chrome & Firefox) you'll see if a book's available right on the Amazon page.
In the beginning the Universe was created. This has made a lot of people very angry and been widely regarded as a bad move.

A quote from a fictional book that seems validated every day.

A quote from a fictional book that seems validated every day.