$59.99
+26 Deal Score
17,376 Views
Fantastic knife with a lifetime warranty. I never leave town without it. I use this 10x more than any of my leatherman multi-tools. I own two and wanted this Sapphire color for years. This Sapphire color has only dipped to this price once in the past 10 years. 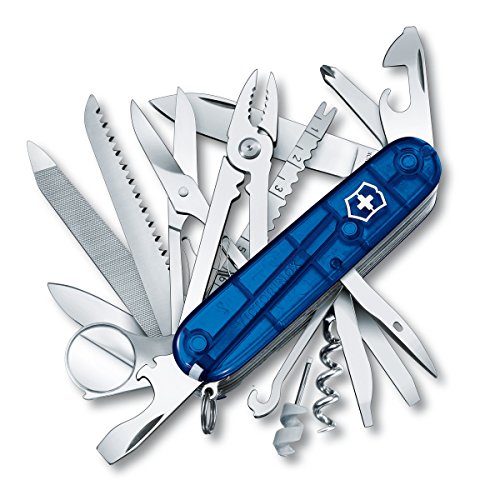 slickerFriend posted this deal. Say thanks!
Add Comment
Reply
in Outdoors (4)
If you purchase something through a post on our site, Slickdeals may get a small share of the sale.

06-26-2020 at 01:38 PM #18
Just a reminder that these are still Made in Switzerland... so, when you compare the pricing of other Swiss made cutting products / tools such as Felcos and PB Swiss, Wenger and Victorinox knives are relatively inexpensive. I have a couple of these Swiss Army Knives, and even one I believe is called the "Tool Box," with a bunch of different tools, including pliers, scissors, and a saw. I'm not sold on the novelty of the blue color, but for people that collect them, like I said, it's still a relatively low price for such an intricate Swiss-made tool. I'd just stick with the red and black versions at the lowest price.
0
0
0
0
Reply
This comment has been rated as unhelpful by Slickdeals users
Joined Feb 2013
L6: Expert
1,445 Posts
533 Reputation
06-26-2020 at 02:44 PM #19
Imo, leathermen tools stronger, and have locking/blocking blades that won't close on your fingers accidentally.

TSA stops tons of people trying to carry sharp things onto airplanes, so they often force travelers with these and other knifes/tools to give them up.

Naturally, all those go to auction, and buyers sell them off cheap on eBay used.
I never need to buy a Leatherman at full price this way.

Fans of camping and hiking thinking of signing up of rei - https://www.reimastercard.com/cre...88&lang=en

And get a swiss army or leatherman knife/tool free with the $100 credit card offer.

06-26-2020 at 04:27 PM #21
Don't accidentally leave it in your pocket when you do the laundry, it will dissemble your washer machine 😣
0
0
0
0
Reply
This comment has been rated as unhelpful by Slickdeals users
Joined Oct 2014
L1: Learner
115 Posts
26 Reputation
06-26-2020 at 06:00 PM #22
I got the red slickdeal a good while back and ebay'd the replacement sapphire blue sides. Maybe it's time I actually swap out the sides and make my blue sapphire champ. Assuming it works well it should be a good bit cheaper than buying this but takes more work.
0
0
0
0
Reply