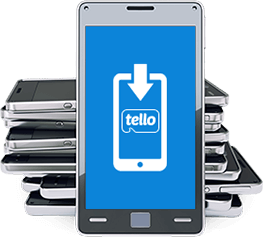 worldofcolor posted this deal. Say thanks!

Back to school supplies & savings

No payment in advance

No contract, no fees

FYI - Tello is an American Express small business so you can get a $5 American Express statement credit each time you use your American Express card on Tello (must register promo by 8/23/20) until 9/20/20 if you have not used up your 10x credits already. Each charge must be $10 or more to qualify for the $5 credit. (i.e. if you purchase a phone)

Add Comment
Reply
in Cell Phone Plans & Services (6) Get Tello Coupons
If you purchase something through a post on our site, Slickdeals may get a small share of the sale.

You will get an e-mail from AX right away after you are charged $10 or more by Tello and you are registered for the AX promo.

The customer service is very pleasant, but I've just had issue after issue. At first, we only received 4 out of 5 SIM cards. Then I took too long to activate, so three or four of the accounts had lapsed, and I needed to bug customer service again to apply a discount code.

There was also an issue with my wife's iPhone XR. We'd been on Project Fi, and she had used hangouts for SMS/MMS. When we moved to Tello, Hangouts stopped working, and she stopped being able to reply to group messages when there was an Android user on the conversation. I went through about a million troubleshooting steps, including doing a hard reset on the phone, and there was still no luck. I called Apple support, they walked me through the same steps (no luck). Then they conferenced in Tello support. They did some sort of network reset on their end, still no luck. Then they just gave up and said to take the phone into an Apple store.
0
0
0
0
Reply
This comment has been rated as unhelpful by Slickdeals users
Joined Dec 2007
L5: Journeyman
592 Posts
53 Reputation
08-07-2020 at 07:16 PM #72
No luck to find out what company is behind Tello.
As they provide free call to Mexico/Canada/CHINA, wondering whether this is another China Base Carrier that going to push out of State by Government
0
0
0
2
Reply
This comment has been rated as unhelpful by Slickdeals users
Joined May 2016
New User
18 Posts
14 Reputation
08-07-2020 at 07:30 PM #73
Mine was working fine. But when I changed it to a different for I got error
0
0
0
0
Reply
This comment has been rated as unhelpful by Slickdeals users
Joined Sep 2017
L3: Novice
200 Posts
70 Reputation
08-07-2020 at 07:40 PM #74
Damn Tello! They're going to teminate all 14 of my Tello phones if I don't make another order for every phone that I want to keep active. I have about $10 of PAYGO credit on most of these. When I signed up, these were NOT the terms I agreed to.

Tello announced this policy change last year that you had to have an "order" every 90 days rather than just using the service at least once every 90 days, but they didn't implement it, until, apparently now, if they indeed go through with it as per the email.
0
0
0
1
Reply
Last edited by finzz2dlft August 7, 2020 at 08:16 PM.