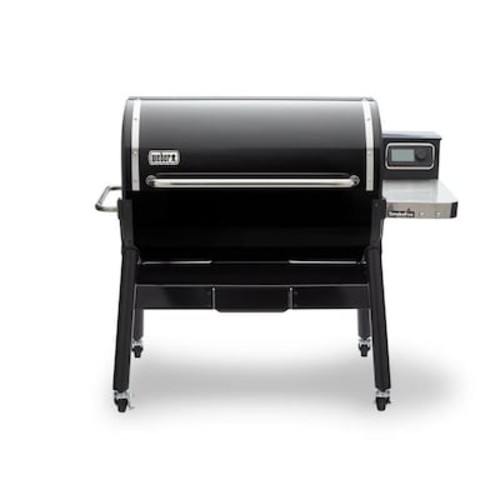 They may be sending out mods for the grease fires.

The SmokeFire has the following issues:

1. Prone to grease fires: The design of this grill allows for all grease to drip into the bottom of the smoke chamber and diverts that grease toward the center of the grill to the firebox. During a long smoke (brisket, pork shoulder) a significant amount of ash is produced; the majority of which does not go down into the ash collector drawer, but spills out around the fire box.

Once the food starts to drip grease, it coats the bottom of smoke chamber. The ash then sticks to the grease. This eventually causes a large ash-grease mud mixture to build up around the firebox and blocks the grease channels from draining properly.

The fan on this smoker/grill can blow hard at times and then blows embers out of the firebox into this grease-ash mud mixture which will almost guarantee a grease fire and in-fact did cause a grease fire at about hour 12 of smoking the brisket.

Even if there wasn't a grease fire issue, why would they design this so that the ash and grease can mix together? Other pellet grills have dedicated drip trays that collect the grease and divert it out of the smoke chamber. Weber actually directs the grease directly TOWARD the firebox which is producing all the ash.

2. Uneven heat distribution: In my EX6 the right side of the grill just to the right of the firebox and center heat deflector is MUCH hotter. This was first apparent during the seasoning process when the flavorizer bars just to the right of center deflector changed colors due to the extreme heat when the bars to the left had little heat discoloration.

Weber advertises that the grill was designed for even heat distribution; this is simply not true.

4. The app is terrible: You can't see real time temperatures of your food. You can't see actual internal air temperature, just the temperature you set the grill to. There are no features such as temperature logging to display a graph of temperature over time. Navigating the app is clumsy. If this is user error on my part, then Weber needs to do a better job at designing the UI to get basic information you want from a smoker.

5. The way to pellet hopper and pellet level sensor is designed gives false readings. The left side of the hopper has a much steeper slope than the left. So, as the pellets are used the left side empties first while quite a bit on the right side remain high up in the hopper. After smoking for 8hrs, about half the pellets had been used. The auger was visible and the low-pellet warning went off. But, the hopper was still half full. I simply pushed the pellets from the ride side to even them out. Just seems weird this wasn't apparent during testing.

I don't know if over time that this pellet feed issue would lead to a flame out due to pellets not feeding properly, but it is most certainly possible.

Fortunately all of the software issues can be improved with future updates.

Unfortunately the inherent design of this grill is flawed. Allowing all of the grease to collect at the bottom of the smoke chamber and then divert it toward the hottest and dirtiest part of the grill that is spewing embers and ash is unforgivable.

At the very least having to clean up a greasy muddy mess would be a pain. At the very worst you are going to be burning up your food when that ash-grease-mud catches fire. Weber advertised an improved ash collection design and not having to use a shop vac to remove the ash as often with competitor smokers. I don't see how this was not discovered during testing of the product.

Sorry Weber, but you dropped the ball on this product. I am sad too, because I have been waiting for it to come out since it was announced.

This was the first time I ever pre-ordered anything and it will be probably be the last.

Thank you Amazon for your support and return policy.

I've added photos of how the bottom of the smoker looked after the 12 hour brisket smoke. You can see the grease/ash mixture on the bottom of the grill. I added the foil before the smoke because it was obvious that grease was going to get everywhere and mix with the ash. What i didn't predict is just how much ash ends up inside the grill and just how little ends up in the ash tray. Probably 4:1 ratio of ash in grill to ash in the ash tray.

A photo of the hopper is included to show how the pellets do not feed evenly. I do not know if it would eventually starve the unit of fuel, but it seems highly likely judging by how visible the auger inlet is. What it definitely does is trip the low-pellet sensor, so the grill thinks it has is less pellets than it does.

I added another photo from a second cook I did that shows how the smoker spits out embers on the bottom of the grill. Unfortunately, the grates were in focus and not the bottom, but you can clearly see the embers. This occurred on a higher temperature when i was searing a Tri-Tip.

Also added a video of the grease fire that started at the very end of the cook. I initiated shutdown mode which I think is why the fan is blowing harder than normal.

I decided to try it again smoke two pork shoulders long and slow for 14hrs. During that smoke, it flamed out twice. The first was when a "material bridge" occurred at the entrance to the auger. Then when it was cleared it dumped ~1lb of pellets into the firebox that overflowed into the smoke chamber. I had to let the grill cool down for a good 20 minutes then took me about 10-15 minutes to clean out all the pellets. A lot of the pellets also fell into the grease at the bottom, so to prevent another grease fire I had to remove them.

The second flame out occurred due to the material not feeding down the shallow slope of the hopper. The pellets on the right side eventually get hung up and even though has a good 7-10lbs of pellets still in the hopper it flamed out again.

For the second cook I didn't line the bottom of the smoker with foil in case that was the cause of the ash clogging the drain channels, it still clogged up, but I never saw a grease fire. But embers actively fell into the bottom of the grill, so it's just a matter of time.

Everything I've tried to smoke low and slow just hasn't worked out (brisket and pork shoulder). Everything I have grilled at high heat has turned out great (tri-tip and burgers)

It's a bummer this had so many issues. I was looking forward to its release but ultimately decided against it and got a Rectec instead.
0
0
0
0
Reply
Page 1 of 4
1 2 3 4
Join the Conversation
Add a Comment

$75 off smart thermostats for Oncor customers (Dallas, Fort Worth)