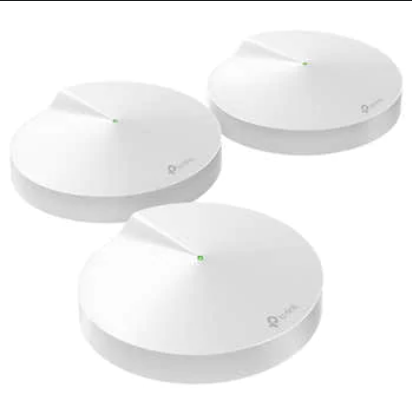 Its just the pucks get kinda warm..

That said, the Deco M9 system works well.
0
0
0
0
Reply
This comment has been rated as unhelpful by Slickdeals users
Joined Jan 2005
L4: Apprentice
349 Posts
102 Reputation
09-18-2020 at 08:37 PM #11
I am a network engineer and use these for my house as access points (router is virtualized pfSense). I have multiple VLANs and internal networks, and these have been rock solid for well over a year. I've purchased them for several family members, and their experiences have been similar. In most cases, I deploy with wired backhaul for as many of them as I can, but the wireless backhaul with dedicated channel works great. I have gigabit Internet at my house, and I often pull over 68MB/s (that's nearly 550Mbps over wireless), which is just insane. :-)

As others have said, these seldom, if ever, need to be rebooted. I have had better luck with these than Eero, Google WiFi, and Netgear Orbi, which all have similar specs but simply did not perform as well. The Linksys Velop system's performance was similar to these, but that system is more expensive, less intuitive (the app is terrible), and Linksys had to enable functionality via firmware updates after release to match these guys.

One note: If you want to use things like parental controls, enabling/disabling individual devices on demand or scheduled, etc......you need to have these acting as the router (vs my infra where they are only in AP mode).

At work, we obviously use and deploy significantly more complex hardware, generally Meraki. But for a home mesh network, this is about as good as it gets. With WiFi6 around the bend, there may be some benefit to waiting. But if you want something now, and you don't want to pay a ton, this will easily cover very large houses nicely.

The parental controls could be refined, but for simplicity it works. Standard deny rules along with time limits and bed time feature capabilities.
0
0
0
0
Reply
This comment has been rated as unhelpful by Slickdeals users
Joined May 2013
L7: Teacher
2,657 Posts
09-18-2020 at 10:00 PM #15
i rather this be cheaper and not have the "smart home" feature they advertise with zigbee