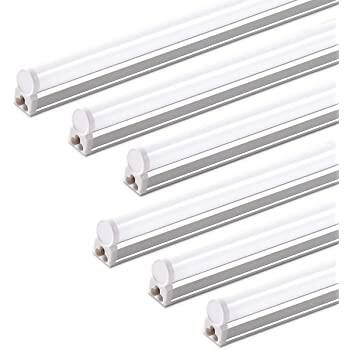 JZ1989 posted this deal. Say thanks!
Add Comment
Reply
in Lighting (8)
If you purchase something through a post on our site, Slickdeals may get a small share of the sale.

A couple of harnesses for a ceiling junction box and whatnot does have a "ground" wire, but that would mean only the 1st light in a series is grounded (assuming the prong on the fixture's end cares for that ground wire at all).

That said, I have been playing with a similar set, at 4K light temp in my garage, and I am happy. 6.5K is too harsh/clinical and 5K not that far. CRI is typ. above average, and these are OK. I had 6x lights, I've wired 2x to replace the existing switch, and 4x were wired to the garage door opener that had its little safety light with a sep. switch on the wall remote.

LED lights seem to be pretty bright, but between the lack of reflectors and the fact that light intensity drops geometrically in relationship to distance (inverse square: double the distance = 1/4th the light, 4x the distance = 1/16th the light), can leave things desired if you don't plan on a dense installation.

0
0
0
0
Reply
This comment has been rated as unhelpful by Slickdeals users
Joined Nov 2010
L2: Beginner
81 Posts
25 Reputation
09-29-2020 at 06:35 PM #26
I bought the 10 pk when they were $40. Hung all 10 daisy-chained to one outlet in my basement. Impressive lighting. Do wish the cables connecting them were slightly longer as I would've spaced them out farther apart. Used double sided foam tape for some of the install onto metal and used the included clips for the lights I hung on the ceiling wood beams. Used a light socket power plug adapter to power them. No issues so far and basement is much brighter.
0
0
0
0
Reply
Page 2 of 2
1 2
Join the Conversation
Add a Comment

Space Exploration - Double Your Apartment Storage Without Moving
Copy Code & Open Site More Deals from
Did this coupon
work for you?
Copy
Link Copied to Clipboard