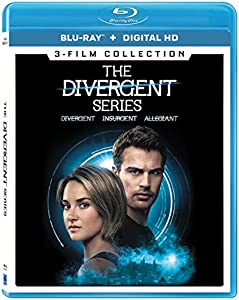 To start, this is not the complete series. Allegiant, the last film, was broken up into Part 1 and Part 2. After all it worked for "Harry Potter" as well as the "Hunger Games" series. Unfortunately, Allegiant Part 1 didn't do so well at the box office, so they decided not to do Allegiant Part 2 as a theatrical release. But, have no fear. They (who are "they" anyway) changed the name from Allegiant Part 2 to Ascendant, and it will now be released on television. Ascendant being released on television might not sound too bad for some, but it had at least one major consequence. Shailene Woodley, who plays the main character Tris, has officially dropped out of the final film because she did not sign up to do a television show. No word on Theo James (Four) yet.

It does not have lossless audio, TrueHD nor DTS MA. It is Dolby Digital 5.1. What a bummer.

hunger games is my favorite of the YA books, followed by twilight.

I wish they marketed mortal engines better. majority of people dont care about moving cities and the entire idea put people off. should have focused more on the 2 main subjects and the adventure.