Pretty close to the previous Amazon deal and counts towards the B2G1 free deal listed elsewhere.

Did a search and didn't see it so apologies if this is a repost. 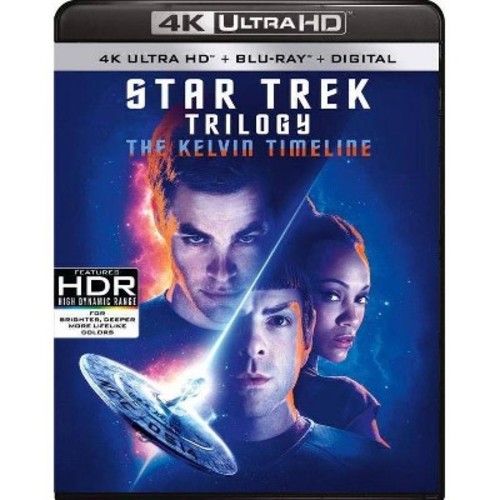 Ask our community of deal experts a question about this deal, product, or store.
Want more deals like this? Create a deal alert for Digital Movie Download & Streaming.
Add Deal Alert

10-12-2020 at 11:17 AM #2
$35 on Amazon again.
1
0
1
0
Reply
This comment has been rated as unhelpful by Slickdeals users
Joined Jan 2011
L5: Journeyman
512 Posts
109 Reputation
Our community has rated this post as helpful. If you agree, why not thank ?
10-12-2020 at 11:19 PM #3
For fellow AV enthusiasts, heads up that none of the JJ Star Trek's are "true 4K." It's upscaled 2K video. The physical discs do NOT have Dolby Vision. Source: Digiraw's Real 4K vs Fake 4K List [digiraw.com]
I'm unsure if this 3-pack physical copy comes with any digital codes.
If you want Dolby Vision, I recommend getting the digital UHD versions through Vudu. Source: Community Spreadsheet of 4K Codes and where to redeem them [google.com]

My opinion:
As a lifelong Trek fan, I bought the JJ 2009 film from Vudu hoping it would be a spectacle for my new 65" OLED. Unfortunately, the upscaled 2K was noticeable; the image looked oversharpened and it wasn't as "crisp" as a true 4K film. Dolby Vision (which is basically HDR on steroids) was cool but the wow-factor wasn't as strong as other films. Moana, Ready Player One, and Star Wars: Rogue One are all amazing when viewed on a Dolby Vision display.

These movies are actually better than a majority including true 4K especially on the AQ side.

I always get a kick when people mention "AV enthusiasts" then leave out half of the movie, IMO the better half.

As far as DV IMO it's really only a benefit on disc especially if you have a good player.

I'll give you an example, Captain Marvel.
On Disney it has DV but the disc does not.
Playing the disc on my Panny 820 onto a C9, there is no advantage to DV digitally. As a matter of fact the 820's tone mapping does such a good job it actually makes it look slightly better PQ wise.

AQ wise there is no contest, there is a significant drop in quality with digital.

I would mention that the transfer on Captain Marvel is not that great but that's true for almost all Marvel movies.

In the end for uhd and Dolby vision Atmos and DTS. It's best to use a disc.
1
0
0
0
Reply
This comment has been rated as unhelpful by Slickdeals users
Joined Jul 2006
Guru
8,217 Posts
1,318 Reputation
Pro

AQ wise you are sacrificing a significant amount of quality for the convenience.
0
0
0
0
Reply
This comment has been rated as unhelpful by Slickdeals users
Joined Nov 2017
New User
18 Posts
18 Reputation
10-25-2020 at 01:01 PM #11
Seems to be a little cheaper at Best Buy, if you aren't going to leverage any other deals: