Note, availability for curbside pickup may vary by location. 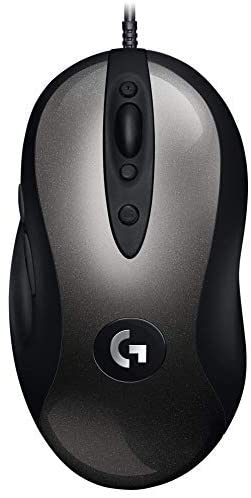 aznsniper911 posted this deal. Say thanks!

Written by Edited October 19, 2020 at 01:57 PM by
MX518 [bestbuy.com]looks like a decent deal no?
Add Comment
Reply
in Mice (7)
If you purchase something through a post on our site, Slickdeals may get a small share of the sale.

This comment has been rated as unhelpful by Slickdeals users
Joined Apr 2015
L4: Apprentice
302 Posts
140 Reputation
10-19-2020 at 07:42 AM #121
Wow this is an old school mouse. I just threw out the wireless version (G7 I believe) that came with 2 batteries and a charging station in the receiver so you could swap the batteries when they died.

I don't love their software but it is what it is.

0
Reply
This comment has been rated as unhelpful by Slickdeals users
Joined Sep 2010
L5: Journeyman
781 Posts
177 Reputation
10-19-2020 at 08:56 AM #124
Oh the memories. Probably the best mouse I ever had. It just "fit" my hand perfectly. I wish they would make a wireless version of this. Its hard to go back to using a corded mouse

0
Reply
This comment has been rated as unhelpful by Slickdeals users
Joined Jan 2015
L1: Learner
18 Posts
14 Reputation
10-19-2020 at 11:06 AM #127
Wow. I bought this mouse full price and don't regret it for a second. I had the original mx518 and I loved the shape/weight/tracking. This one improves on the tracking but leaves the rest the same. Very happy with it.

I hope this means they aren't discontinuing it.

This comment has been rated as unhelpful by Slickdeals users
Joined Nov 2007
L4: Apprentice
341 Posts
87 Reputation
10-19-2020 at 11:13 AM #128
I still use my original MX 518 from more than a decade ago. There used to be a 3rd party program for it called UberOptions that would let you customize the buttons on it. I was recently trying to get that working again on Windows 10. I did manage to get it working but it was a pain and I'm not confident I'd be able to do so again if I ever have to reinstall in the future.

Once I saw that they have re-released this model and it works out of the box with Logitech's G Hub software, I was sold. I actually grabbed 2 of them at this price.

On a side note, one time long ago my first MX 518 stopped working correctly. Logitech sent me a brand new, in-the-box, retail-ready replacement at no cost and I didn't even have to send back the bad one. That was good customer service. No idea if that would be the case these days. This was back when mice came in larger, fancy packaging. Not just a clamshell case.

10-19-2020 at 11:19 AM #129
I placed an order. My everyday mouse at home has been the original MX518 since December 2010 - nearly 10 full years ago! Just two days ago, I was saying to my significant other that the right-click is starting to act up. I have tried other mice in the last 10 years - recent ones include the Logitech G Pro Gaming Mouse [logitechg.com] and Razer Viper Ultimate [razer.com] - but none have come close to the MX518. I'd easily pay $120+ for a wireless version of the MX518 if such a mouse were available.

The two are similar, with the G400s being a bit wider based on my personal usage. I have been using the G400s in my work office for a few years (before the pandemic, at least).
Logitech still seems to have excellent customer service. Like you, one of my two MX518 mice from 2010 stopped working in 2013; I contacted them and they sent me a brand new G400s, which was their replacement at the time. Just earlier this year, one of my cats got ahold of the tiny USB dongle of my Logitech G Pro mouse, and Logitech sent me a brand new dongle free of charge.

I was also tracking this mouse for months before its release, and I almost bought it when it initially came out in 2019 [venturebeat.com]. The only reason I did not was because I was hoping for a wireless version, and my original MX518 was still working at the time.

Dell Kicks Off October by Unveiling Some Scary Good Monitors
Copy Code & Open Site More Deals from
Did this coupon
work for you?
Copy
Link Copied to Clipboard