Note, curbside pickup may vary depending on location. 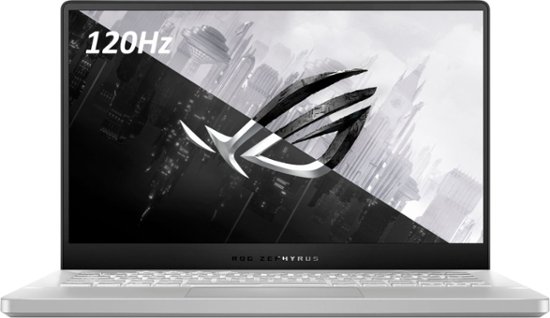 Can you recommend a better 14" laptop for somebody who needs a beefy cpu and great battery life?

0
Reply
This comment has been rated as unhelpful by Slickdeals users
Joined Jul 2018
L3: Novice
252 Posts
54 Reputation
10-23-2020 at 12:27 AM #18
Yeah, some of the compromises they made to get everything in the 14" chassis. Another con I've read is that the white backlighting on the keys isn't that great and the silver keys don't contrast together very well (vs something like standard black keys), making it harder to see them. But still, it's a good laptop, really the only thing that keeps me from going for this one is the lack of a webcam.

Comparable to a higher end Thinkpad. Much better than the lower end Thinkpads. I'll try to compare to my Carbon Elite ThinkPad X1 Extreme or whatever that is tomorrow. Bedtime now.

EDIT:
Okay, I have my ThinkPad X1 Extreme in hand and am comparing it to the Zephyrus G14. All-in-all, I'd probably give the ThinkPad an 8/10 score in general build quality and the G14 would get a 7.5. The ThinkPad is a definite winner, but not by much. All this said, this is a very quick and limited evaluation. So here's a breakdown of why I claim these things:

1. 10/10 would most likely go to all metal ultrabooks. These beefier laptops really just can't compete with those really awesome builds. So 8/10 is pretty darn good still. These ain't your creaking 2005 laptops. Both feel like very solid laptops, overall. You shouldn't pass on either laptop because of generally-perceived build quality.
2. I strongly prefer the build quality of the bottom half (keyboard half) of the Zephyrus over the ThinkPad. The materials just feel much better and sturdier, plus when trying to apply a twist to it, the Zephyrus is MUCH more rigid. Now to be fair, it has a smaller size and has a slightly unfair advantage because of that. But it's still significant.
3. I strongly prefer the build quality of the top half (screen half) of the ThinkPad. It's the opposite of the bottom half in that the ThinkPad is much more rigid while the Zephyrus has much more flex, despite the Zephyrus being smaller and, in theory, having an advantage because of that. Ultimately, I think this is more important than flex in the bottom half. While sure, a major flex on the bottom could trash your laptop, a moderate flex on the top would be much more likely to cause damage (resulting in a cracked/broken screen). So I think this is a more important observation than the bottom half.
4. Because of the magnesium casing, the Zephyrus feels a little bit better in hand. But the soft plastic texture of the ThinkPad is also quite good. Not as good as the soft carbon fiber texture my old Dell XPS 13 had, but still quite good.
5. I'm not sure how awesome the hinge mechanism is on the Zephyrus. It's an innovative system to help with cooling, but I wonder if there might be more/faster wear & tear because of the hinge system. To be clear, I'm less worried about the physical hinges themselves and more worried about the part of the screen that folds down in order to become the back feet for the laptop (i.e. the edge of the screen section has rubber feet on it, lifts the back of the bottom kb section off of the table, to improve air flow). Again, this is innovative and interesting, but I just don't know how this will prove out in the long run. The ThinkPad is pretty traditional on this front.

2
Reply
This comment has been rated as unhelpful by Slickdeals users
Joined Sep 2014
New User
15 Posts
10 Reputation
10-23-2020 at 12:30 AM #22
This laptop definitely fits the bill if you need a beastly CPU and it has really good battery life given how powerful it is. I owned this and returned it and the main cons for me were actually the screen (some ghosting due to this being one of the only 14" 120Hz panels) and that the fans went insane when gaming.