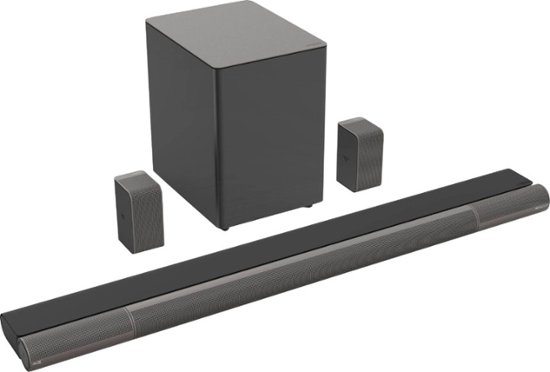 Chingu808 posted this deal. Say thanks!

This comment has been rated as unhelpful by Slickdeals users
Joined Jun 2011
L2: Beginner
81 Posts
22 Reputation
11-15-2020 at 11:24 PM #151
Yeah pretty interesting to note. It not available anywhere. Does Vizio took out or stop manufacturing it due to fixing it issues or what the reason... pretty fisy

0
Reply
This comment has been rated as unhelpful by Slickdeals users
Joined Nov 2004
L5: Journeyman
934 Posts
126 Reputation
11-16-2020 at 02:52 AM #152
I have had a couple of minor app issues like I did with the original Vizio atmos SB. I really think they completely sold out because of the original $699.99 sale price for a few days at the start of when this was offered as their newest SB. Someone said It was offered at same price on Vizio website same time and apparently the sale might have surprised them by the number of sales so now it's back to factory to start rebuilding a lot more! Great deal though for those that got in at the $699.99 price point, Love mine!

imagine if these reviews were basing it off a $700 price and not the $1000, its pretty easy to recommend to anyone that wants a full blown sound experience in a sound bar package. Very minor issues still, but I am very happy with it

0
Reply
This comment has been rated as unhelpful by Slickdeals users
Joined Jun 2011
L2: Beginner
81 Posts
22 Reputation
11-17-2020 at 08:27 PM #154
everyone still have time until Jan to return which is good option based on how it perform to test, asses, validate and make a decision. I am sure with ThanksGiving upcoming weekend and in Dec Christmas and New Year we can blast this beast with sound measure the reliability of this sound bar. I do see open box item inventory keep up and go away in Best Buy so for sure by Jan more open box items will get pop-up

0
Reply
This comment has been rated as unhelpful by Slickdeals users
Joined Jun 2017
L1: Learner
22 Posts
10 Reputation
11-19-2020 at 06:47 PM #156
actually saw this and placed an order ASAP hoping it actually does release tomorrow.... or at least within a week. Everywhere else is either OOS or December estimates.. Probably too good to be true but we shall see

0
Reply
This comment has been rated as unhelpful by Slickdeals users
Joined Jul 2009
L2: Beginner
37 Posts
18 Reputation
12-18-2020 at 04:28 PM #159
Did any one try out the soundbar yet? I still get some occasional dropouts with the signal for the subwoofer/rear speakers. I'm playing through my LG C9 and some apps (mostly Google Play Movies) causes the audio drop outs more than others.

This was a major problem with their last soundbar, the VIzio SB46514-F6. If you search the internet there's a ton of complaints about dropouts with that one. I have that soundbar as well and can confirm. The Vizio Elevate isn't nearly as bad.

Also, if I put my ear up to the rear upward firing Atmos speakers, very often I hear a weird high pitch hiss or static. If you're sitting a few feet away it's mostly unnoticeable, but depending on the audio that's playing sometimes the hiss/static is noticeable for a split second.

Can anyone else confirm these issues on their end? Overall I'm kind of disappointed with the Elevate. From the reviews I read (The Wirecutter, etc) I really thought this soundbar would fix all the issues I was having with the SB46514-F6 model, but it looks like I'm going to be returning this one and just keep waiting. Maybe I should have tried the JBL 9.1 instead.

The Audio Technica ATH-SR6BTBK Headphones Cuts the Cord Without Sacrifice to Audio Quality
Copy Code & Open Site More Deals from
Did this coupon
work for you?
Copy
Link Copied to Clipboard