Free
+374 Deal Score
127,668 Views
Target is offering Select Target Circle Members [free to join]: 6-Month Trial Membership of Same Day Delivery by Shipt for Free when you log into your Target Circle account and click on 'save offer' from the menu. Thanks jlkeeton 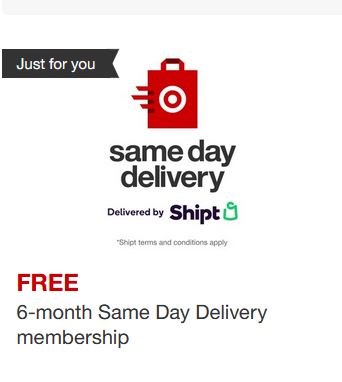 jlkeeton posted this deal. Say thanks!

I found this at the top of my Target Circle offers this morning and also in the "For You" section:

Details & exclusions
Save this offer to start a free 6-month trial of Same Day Delivery by Shipt.

I think you have to have Shipt in your area, so it is YMMV. I like this because it does NOT auto-renew unlike so many other offers. Check your Target Circle on the web or app to see if you also have this offer.

This comment has been rated as unhelpful by Slickdeals users
Joined Nov 2016
New User
9 Posts
10 Reputation
11-16-2020 at 11:20 PM #196
I would just say that Shipt shoppers do not make minimum wage...much like waitresses. We typically spend 40-60 minutes shopping your order, check out, bag your items, drive in our car with our gas to deliver to a person who sometimes can live 40 min round trip from the store. Shipt pays us $8-15 on average for an order like that. Tips are what keeps our cars maintained and full of gas. Like anything, you don't need to tip , but it's greatly appreciated

0
Reply
This comment has been rated as unhelpful by Slickdeals users
Joined Nov 2016
New User
9 Posts
10 Reputation
11-16-2020 at 11:33 PM #200
I don't think I'm too sketchy 🤣
I have multiple degrees, a husband, 4 kids. I like the job because it offers me flexibility with the kids, school and my husband's job! What other job can I take myself off the schedule if a kid gets sick or needs me for some other reason? Also- this way I just work when my husband is home and I don't need to pay for daycare for 4 kids.

There is an application online that needs to be filled out and a few interview questions they ask and you film yourself answering them. They review your application. If they need shoppers in your area and they like what they see- they will then do a background check on you.

0
Reply
This comment has been rated as unhelpful by Slickdeals users
Joined Nov 2016
New User
9 Posts
10 Reputation
11-16-2020 at 11:41 PM #201
We shop your entire order, message you with any out of stock items and you are able to make substitutions, you are able to add things on as we shop if you forgot something, we ring it up, bag it all up and drive it to your house (our car and gas)
😊

0
Reply
This comment has been rated as unhelpful by Slickdeals users
Joined Feb 2013
L1: Learner
14 Posts
18 Reputation
11-17-2020 at 10:16 PM #202
I previously got a Shipt trial thru Target. It worked only in the Target app and not at other stores that use Shipt. Customer service could not get the trial to work thru their main site. Also, the phone number to cancel was different than at Shipt.com, so take a screenshot of the terms of the trial.

1
Reply
This comment has been rated as unhelpful by Slickdeals users
Joined Nov 2015
L1: Learner
24 Posts
26 Reputation
11-22-2020 at 10:23 PM #206
Used this service several months ago for a bit. Mostly like Shipt, but ended up cancelling due to it being super inconvenient. I live <15 min from Target, and my orders NEVER arrived on time. I would select 9-10am, and at 9 I would get a notification that my order is late and would come from 10-11am instead. Then 11-12, 12-1, 1-2, 2-3, etc. This wasn't the end of the world during work from home times, but now it just doesn't work. Shipt told me none of the drivers were picking up the order until it had been long enough that they increase the commission. I don't blame the drivers for this, even if true, because that just means Shipt doesn't compensate them well enough. Regardless, I don't think it's worth it unless you live in a busy enough city to actually use the service as it is advertised.

1
Reply
This comment has been rated as unhelpful by Slickdeals users
Joined Oct 2020
New User
3 Posts
10 Reputation
11-25-2020 at 10:59 PM #207
you have HUNDREDS of coupons on your Target Circle area? Really? I don't even have one and have been a redcard member for years

0
Reply
This comment has been rated as unhelpful by Slickdeals users
Joined Oct 2020
New User
3 Posts
10 Reputation
11-25-2020 at 10:59 PM #208
you have HUNDREDS of coupons on your Target Circle area? Really? I don't even have one and have been a redcard member for years
me neither :-( wonder if there is any other way to get?