Slickdeals Forums Deal Talk 4K Blu-ray Movies: The Invisible Man $10, 1917 or John Wick: Chapter 3 $8 Each & Much More + Free Curbside Pickup
Advanced Search
Sorry, this deal has expired. Get notified of deals like this in the future. Add Deal Alert for this Item
Frontpage Deal

persian_mafia
+249 Deal Score
104,739 Views
Best Buy has select 4K & Blu-ray Movies on sale for the prices below. Select free curbside pickup where stock permits, or shipping free for orders $35 or more. Thanks persian_mafia

Note, availability for curbside pickup will vary by location and may be limited in some areas. Amazon also has select 4K & Blu-ray Movies on sale for the prices below. Shipping is free w/ Prime or on $25+ orders. 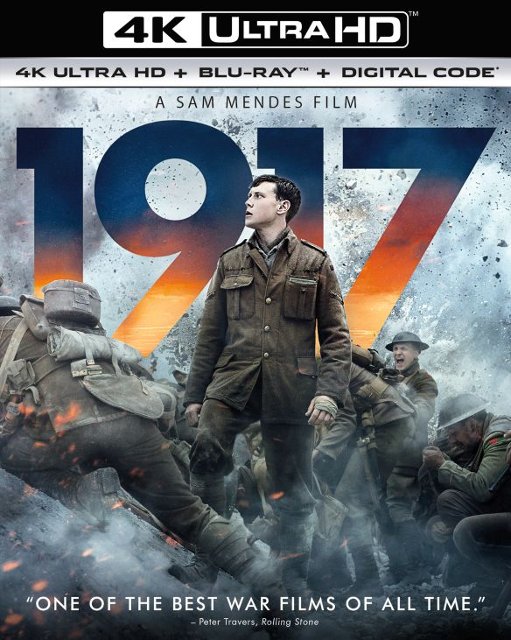 Written by Edited November 19, 2020 at 04:26 PM by
For those interested, Best Buy select Black Friday movies on sale from $7.99. Select curbside pickup to save on shipping. Amazon matched (shipping is free w/ prime):
Add Comment
Reply
in Blu-ray & 4K Blu-ray (13)
If you purchase something through a post on our site, Slickdeals may get a small share of the sale.

1
Reply
This comment has been rated as unhelpful by Slickdeals users
Joined Dec 2013
L6: Expert
1,342 Posts
685 Reputation
11-20-2020 at 12:59 AM #156
For those who don' t know the outer "cardboard sleeves" on some titles are known as "slipcovers". Not all films when released on Blu-ray or 4K Blu-ray come with one either, but when they do, it's generally done for the first pressing of the film to Blu-ray and/or 4K Blu-ray. After that pressing is considered "sold out" by the studio, more of the films are then made on both formats and then the studios don't produce the slipcovers anymore. There is a large amount of collector's for these slipcovers too.

Collectors will tell you that it's always best to buy a film as soon as it is released to increase your chance of getting a slipcover in mint condition, after awhile they can get damaged on the shelf by multiple people picking up a film, putting it back, etc. During this holiday season with some really nice titles being reduced in price in both 4K and standard Blu-ray and using Best Buy as an example, don't just check on the 4K shelf if you are looking for a specific film in 4K but also check the standard Blu-ray racks and the cardboard displays that are placed in the media area, close to the registers, and in the television area. Stores are restocking the movies throughout the next several weeks I was told so if you don't find that slipcover you want, check back from time to time if you can.

Yes, it's just a piece of cardboard sleeve that fits over a movie, but surprisingly that is a big deal to some movie fans. I actually think the ones for the Star Wars 4K titles, 1917 4K, Joker 4K, The Goonies 4K and a few others all look quite nice.

0
Reply
Last edited by SpeedRacer20 November 20, 2020 at 01:03 AM.
This comment has been rated as unhelpful by Slickdeals users
Joined Apr 2005
L10: Grand Master
7,870 Posts
1,370 Reputation
11-20-2020 at 06:58 AM #157
Thanks for the info. I had ordered 1917 for in-store pickup from 2 different Best Buys trying to find now its a slipcover but both came without. I looked at the 4K movie section before picking up the second purchase to see if they had one I could exchange for but they were sold out in that area, I will now check multiple areas when I go return one of the discs.

I know it's just a slipcover but I kind of like them on there better than just the case. I don't even display my movies, just a quirk of mine but not the end of the world for me if I can't find a slipcover.

0
Reply
This comment has been rated as unhelpful by Slickdeals users
Joined Dec 2013
L6: Expert
1,342 Posts
685 Reputation
11-20-2020 at 06:02 PM #161
If you have not opened your copy, I say take it with you and leave it in your car. Go inside, and make sure you look through the entire media area including the Black Friday blue cardboard displays they are setting up around the media area, front registers, and the televisions area. You may find that they have restocked the store and could find one with a slipcover, or they could be restocking over the next several days so check back. My local store had none last week with the slipcover for 1917, but then they restocked their shelves and there are about half a dozen copies with the slipcover there.

0
Reply
This comment has been rated as unhelpful by Slickdeals users
Joined Dec 2013
L6: Expert
1,342 Posts
685 Reputation
11-20-2020 at 06:04 PM #162
Exactly, some do as do steelbooks for certain films too. I remember when The Hurt Locker was coming out on Blu-ray and Best Buy had an exclusive steelbook for it. A lot of collectors were complaining about how it wasn't G2 size and how they would not buy it. The film came out, the steelbooks were a lot rarer than anticipated, the film then won some Academy Awards and everyone then wanted the steelbook. I had about half a dozen and flipped them for quite a bit of money.

0
Reply
This comment has been rated as unhelpful by Slickdeals users
Joined Mar 2011
L10: Grand Master
6,309 Posts
1,147 Reputation
11-20-2020 at 06:56 PM #163
probably but prices for these come up lower at other times. like bf, movie prices will drop near Easter Week or Fathers Day. I believe the prices for marvel may drop near or around the next marvel releases, like Black Widow.


its that darn "Solo" that likes to stay sky-butt high. I finally snagged it via disney movie rewards using my earned points!!