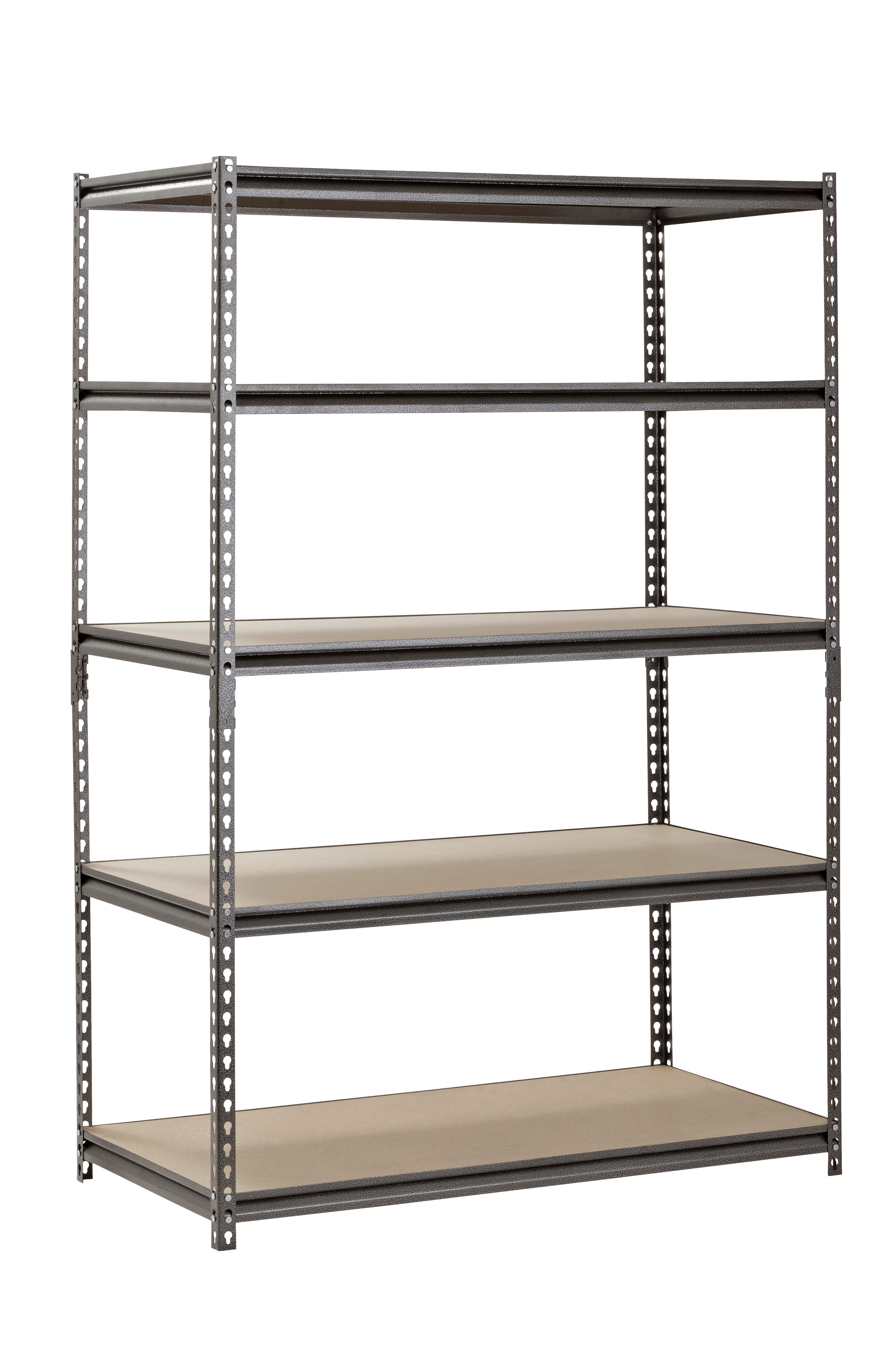 Pitak posted this deal. Say thanks!

https://www.walmart.com/ip/Muscle...H/54134493
Add Comment
Reply
in Storage & Cleaning (5)
If you purchase something through a post on our site, Slickdeals may get a small share of the sale.

This comment has been rated as unhelpful by Slickdeals users
Joined Jun 2019
New User
4 Posts
10 Reputation
11-25-2020 at 08:41 AM #91
Looking at how the boards are set and how the horizontal metal bars are shaped, Is it possible to put 1x3 across underneath to prevent warping, like someone suggested here?

0
Reply
This comment has been rated as unhelpful by Slickdeals users
Joined Mar 2008
I spend too much
143 Posts
87 Reputation
11-27-2020 at 02:53 PM #93
I have two of these and the shelves WILL warp after a year of two -- even without heavy weighted items on them or damp conditions. I slowly have been replacing the shelves with plywood as they fail.

I was pissed and walmart just gave me the option to packup and ship it back.

I see this silver includes the coupler. Even though the descriptions are the same photos are the same...buried deep down the product page for the black was "Couplers not included".

Just an FYI in case someone wanted a different color. Stick with the silver ones for this thread.

0
Reply
This comment has been rated as unhelpful by Slickdeals users
Joined Apr 2011
L3: Novice
117 Posts
14 Reputation
11-30-2020 at 05:14 PM #97
TLDR - Not that great a deal if you can find this other rack YMMV
My Costco Business Center has the same dimension rack [whalenfurniture.com] by Whalen, notably higher quality, for $59.99 everyday price. YMMV as I don't know if they have it at Costco as well, or nationwide Business Centers. Worth checking if you have a CBC.

Story
I bought Muscle Rack by Edsal seeing the discount and the 100+ thumbs but ultimately found the deal is lukewarm. I happen to be at my local Costco in Orange County, CA and the same size rack by Whalen is $60 regular price. So I have one of each now. Here's my comparison:

This comment has been rated as unhelpful by Slickdeals users
Joined Apr 2011
L3: Novice
117 Posts
14 Reputation
11-30-2020 at 05:16 PM #98
I called Edsal and they offered to send me replacement parts for ones that were bent. They didn't ask for any verification of the order. Maybe you can get the couplers, not sure why they wouldn't include that. Seems essential?

0
Reply
This comment has been rated as unhelpful by Slickdeals users
Joined Jan 2011
L6: Expert
1,217 Posts
109 Reputation
11-30-2020 at 05:46 PM #99
I ordered two and they came today. Each had 2 couplers, so I was able to put one together. They say I should have replacement parts in a week. Lets hope. The particle board looks pretty flimsy, but it is supported all around, so if the weight is reasonably even it ought to be okay.

The ones you got actually said they didn't include couplers?!?!?! They are pretty useless without the couplers.

0
Reply
This comment has been rated as unhelpful by Slickdeals users
Joined May 2011
L4: Apprentice
464 Posts
18 Reputation
12-01-2020 at 12:14 AM #100
I thought mine only included 2 couplers, but they were hidden between the end of the particle board and cardboard on the short length side.

Item arrived on time, but two parts (one brace and a coupler) were missing in the shipment and two of the five shelves were slightly damaged during shipping. Called the customer service line and they promised to ship the replacements. But when the replacement shipment arrived after several days, all the parts (coupler, brace, and shelves) were from a different model. I was able to use the coupler, but the brace and shelves did not fit in.

Called customer service again; I was told that they have two different builds with two different sizes under the same model number (!!!). The customer service representative who took my first call apparently made a wrong guess. I was told that they would ship the correct parts this time. In two days, I received three (yes, three) separate shipments on the same day with similar parts. All three of them had wrong sized boards and only one of them had the correct brace!!! I decided to use the damaged shelves from the original shipment and be done with this saga.

I don't know how this company survives with this kind of poor quality control and incompetent shipping and handling. The original shipping had parts missing, and all four additional bulky UPS shipments had the wrong parts in them. But their customer support was patient and supportive.

I agree with others that the particleboard shelves are thin and would get damaged/warped easily.

Are You Buying the Right Paper Towel Brand?
Copy Code & Open Site More Deals from
Did this coupon
work for you?
Copy
Link Copied to Clipboard