Thanks to community member HuskieHulk for finding this deal.

Note, Membership is required to complete an in-club purchase at Sam's Club. 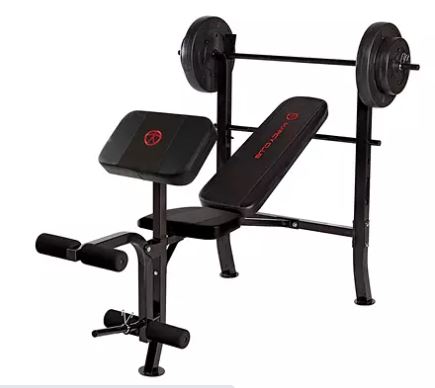 HuskieHulk posted this deal. Say thanks!

Been looking for a while and this is a great deal for heavyweight husky lifters. Sam's club is giving a $45 gift card for signing up for new membership if you received a flyer in the mail.
Or you can sign up and get $45 in food using this deal.
https://slickdeals.net/f/14449316-get-45-off-your-first-in-club-purchase-when-you-become-a-sam-s-club-member-for-45?src=SiteSearchV2_SearchBarV2Algo1
1st post so hope it goes well. Was eyeing up the Kohls Weider bench set until someone posted it and now it's sold out everywhere.

1
Reply
This comment has been rated as unhelpful by Slickdeals users
Joined Aug 2011
Let Me Bang Bro!
455 Posts
77 Reputation
11-28-2020 at 03:10 PM #47
The bench and the weights are complete garbage. Your vigorous defense of this garbage heap deal highlights your lack of actual lifting experience.

1
Reply
This comment has been rated as unhelpful by Slickdeals users
Joined Aug 2011
Let Me Bang Bro!
455 Posts
77 Reputation
11-28-2020 at 04:39 PM #49
Says the guy who probably can't bench his own body weight. You're saying this trash set is good for people. You have zero credibility.

1
Reply
This comment has been rated as unhelpful by Slickdeals users
Joined Nov 2013
New User
10 Posts
14 Reputation
11-28-2020 at 04:56 PM #50
THIS. Unless your max bench is 100ish pounds you will very quickly exceed this and that makes it worthless as you can really put more weight on it that 100 pounds.

Triple cost w/o weights is more than just a little bit more especially for a base cage. Like I said, it's 14 gauge metal which is the equivalent of racks you'd find commonly on Amazon and Walmart (e.g. Hulkfit or Sunny) or rebranded (e.g. Grind, Titan)

Someone wanting to get started these days will find problems with not only getting decent equipment, but the weights. For someone starting out, this setup is "okay" and the weights can be reused a bit down the line. If you're already into the sport, then you'll be better off with something else.

And for most people, its just a passing fad.

Sold a squat rack last week (with an olympic bar and 200+ lbs of older weights to a dad and his son who was starting out in football) along with the pulldown attachment. Just put together a "cheap" rack that is the equivalent of what you've mentioned tonight (17mm sockets, and could have used washers, was missing only one lock nut). Next week, putting together a Body Solid rack w/ pulldown that I have had in storage.

Point is you made a claim that falls flat on its face. And got called out for it.

And for cages, it's a discussion of what is a good 3x3 11 gauge cage to get? And we are talking at least 2x that amount.

Then there is the bench, FID or just fixed? Realistically, how much weight are you going to be lifting (yourself included)?

Then we can get into the dumbells discussion. The adjustable dumbbells (standard weights) are great to get started. A person doesn't need to get a set (10, 15, 20, etc.) either. Though it helps if you're doing supersets which most people aren't,especially when they're getting started. And even then, we are looking at a 5% weight shift a week something that fixed dumbbells aren't going to support either.

For someone perusing, I'd highly suggest the following starting out:

If you can master the above, and still are interested, then you can either continue without equipment, or use equipment to increase your strength / endurance. Aiming for 5% increase weekly (and if you're doing the push-up thing, +1 every two days until you can do 2 sets of 20 in 2 minutes ... then start doing offset pushups (e.g. grab a brick, a ball or something) and keep going.

Point is, it's a little investment (this set) which can be used later on down the line. It's limited in terms of upper end, but we're not talking about urethane weights here - just something to get started with.

This comment has been rated as unhelpful by Slickdeals users
Joined Apr 2009
L1: Learner
4 Posts
10 Reputation
11-29-2020 at 02:40 AM #53
Thanks for explaining your perspective, and how this Marcy workout bench fits in today's COVID context with other benches, racks and weights.

It's all about tradeoff and spending $130 to get the bench, rack, and weights is a ridiculous steal at this point. Even at Walmart or craigslist olympic bars are $150+, weights are crazy expensive $100+ for 2 x 25 lb plates. I'm just not going to spend $350+ on weights alone , so I just ordered this bench from Sam's.

0
Reply
This comment has been rated as unhelpful by Slickdeals users
Joined Mar 2010
L1: Learner
4 Posts
10 Reputation
11-29-2020 at 11:02 AM #54
One more tip, you don't need Sam's membership to get this deal. Just checkout as a guest customer and you get exact same deal with free shipping

0
Reply
This comment has been rated as unhelpful by Slickdeals users
Joined Jul 2006
L4: Apprentice
321 Posts
73 Reputation
11-29-2020 at 01:37 PM #55
That's exactly it. When I was in college, a cheap set of standard weight (with a three piece bar) was all that I could afford, based upon room and $$$. A simple bench can add more options to your exercise regime.

I used a closet pole (the piece of wood you use to hang clothes off in a closet) attached between a doorway on 4" screws via a couple of wood pieces screwed into the doorway. This was sufficient to get me to 20 pull ups when I weighed 220 lbs. When removed, hidden with a bit of spackle.

For this one, you hang a towel and grip with one hand while the other is in the same position on the bar. Repeat.

All of the above introduce stability, and strengthening one side and then another.

And if you want to see what a basic level of progress is, where you should be aiming for : https://strengthlevel.com/strength-standards

0
Reply
This comment has been rated as unhelpful by Slickdeals users
Joined Oct 2018
L3: Novice
112 Posts
343 Reputation
11-29-2020 at 01:48 PM #56
I own an identical setup since the start of the pandemic (I'm sure just rebranded) and have the following thoughts in case anyone finds it helpful:
- Good: worth the low price for me + it was actually available. I think weights usually sell for $1+ per pound, and you can always use the weights for other workouts if you're creative
- Good: very compact if space is a concern. no where near the size of a regular bench press
- Bad: not a replacement for a real bench press, nor can it handle more weight. Make sure 80lbs is what you want, e.g. to stay in some shape until it's safe again to hit the gym, or until you can afford (big price difference) or have the room for a more serious setup
- Bad: hand grip is narrow so you'll need to adjust after pushing off, or just do closed grip. Again not a problem since 80lbs is light, or just do more reps
- Bad: definitely not as stable as a standard bench, but given there's not much weight it should be good enough. Just learn its limits and don't shake around on it too much

For $130 I think of it as a throwaway later once things return to normal, and not a lifetime investment or anything

I don't think anyone wants to listen to you - this is a place to share experiences, knowledge and deals. You've more than made your position known that you believe that you are far too good (and/or experienced) for equipment like this.

It's obvious you don't want to listen to anyone else either. So why bother posting here?

Ah, no one anywhere else is going to listen to you.

0
Reply
This comment has been rated as unhelpful by Slickdeals users
Joined Aug 2011
Let Me Bang Bro!
455 Posts
77 Reputation
11-29-2020 at 02:56 PM #58
Continue seething. Why would anyone listen to some DYEL about gym equipment? Go do bodyweight exercises and high speeding walking. I'm sure your advice is good for geriatrics.