Thanks to community members rob728 and SUCHaDEAL [discuss] for finding this deal. 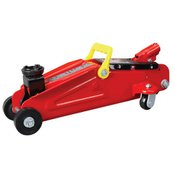 rob728 posted this deal. Say thanks!

Add Comment
Reply
in Automotive Tools (7) Get Pep Boys Coupons
If you purchase something through a post on our site, Slickdeals may get a small share of the sale.


Rebate form can be submitted online at https://www.blackhawkrebates.com/pepboys/#/home using offer # PBA-201205. You can also track the rebate at this link.


The rebate form says to submit at pepboys.com/rebates but that URL doesn't work

Must wait 24 hours after purchase before submitting rebate online. (The above URL works fine.)
https://www.pepboys.com/customer-care/policies 90 days

This comment has been rated as unhelpful by Slickdeals users
Joined Dec 2007
L4: Apprentice
475 Posts
400 Reputation
01-16-2021 at 04:44 PM #376
So an update: I went to return 1 of the jacks since I only got the rebate for 1 out of the 2 that I purchased. The Pep Boys cashier looked at my receipt and said 'we aren't returning rebate items, because you got a rebate for these jacks'. I them told him I only got 1 rebate but I bought 2. He told me to prove it!

Luckily I brought the rebate letter w/ the $19.98 gift card listed on it. He then asked to see my rebate form, because I guess I could have done each rebate separately, even though they were on the same receipt (??). I had my rebate paperwork and showed him the claim from 1 rebate form was for $39.96, and I only got $19.98. After seeing all that, he said 'that's weird' and only then did he refund the jack.

He said that some people, usually people of a certain race, were trying to return the items after they received the rebate. He cashier was Hispanic, and I have no idea what race he was referring to, if he was trying to disparage me and/or trying to explain why he was giving me a hard time. Comment not very PC.

0
Reply
This comment has been rated as unhelpful by Slickdeals users
Joined Dec 2007
L4: Apprentice
475 Posts
400 Reputation
01-17-2021 at 01:22 PM #378
The cashier did not just give me $19.98 for the missing rebate, the store has nothing to do with rebates. He allowed me to return 1 jack and refunded my credit card that was used to pay for it, after he verified I only got 1 rebate for the 2 jacks I purchased. I guess there is no connection between items that have gotten rebates & the physical ability to refund or not, so it's up to the cashier to be the one to determine whether to accept a return. Meaning some people probably could get the full rebate & also go return the items & get refunded if the cashier takes the return.

got email a day later.
"Thank you for the paperwork and information provided. Upon doing further research, I was able to update the product information using the invoice provided, and your rebate is now in the final stages of processing. Please allow 24 to 48 hours for an update to reflect and 4 to 6 weeks from January 18, 2021, for your $39.96 Pep Boys Physical Mastercard Prepaid Card to process and be delivered to the following address: "

now, status changed to
"Status : Pending
Your submission is currently being processed. Please check back later for your rebate status."

I think I am getting approve

0
Reply
This comment has been rated as unhelpful by Slickdeals users
Joined May 2012
L5: Journeyman
540 Posts
84 Reputation
01-19-2021 at 10:21 AM #382
Rebate MasterCard received on Saturday and spent all of it. Jack works fine but too low to lift up the car high enough to slide jack stands under my car. I gotta use a block of wood on the trolley jack to increase the height. It's fine because I only paid approximately $2 on sales tax. It's a lot easier than using the jack from car manufacturer.

0
Reply
This comment has been rated as unhelpful by Slickdeals users
Joined Jan 2007
L3: Novice
124 Posts
87 Reputation
01-19-2021 at 09:08 PM #384
Just an FYI
Received my rebate today in the form of a Pep Boys Prepaid M/C, which had my name on it and required activation online.
Mine had Valid Thru 05/21, which is pretty short. According to the Terms, if you don't use it by the expiration date, you do not have rights to the funds beyond that date.

One way to easily liquidate is to add it as a payment method to your amazon account and then use it as payment for a gift card or balance reload of $19.98. I did it right after I activated card. Now I don't have to worry about expiration or what is the remaining balance.

For those who plan to spend it in person, you may be asked to enter a PIN. In my case, I don't know what the PIN is so I press Enter on the device keypad (where I scan the card). It goes through with no PIN.

Your submission is currently being processed. Please check back later for your rebate status.

How long should this take? Dang. I've done a ton of rebates in the past with little if any problems before. This is my first Pep Boys one though.

0
Reply
This comment has been rated as unhelpful by Slickdeals users
Joined Oct 2016
L2: Beginner
98 Posts
82 Reputation
01-24-2021 at 11:51 AM #388
If there is anyone received the rebates but submitted by mail? I could not submit online so submitted by mail that time. Thx

0
Reply
This comment has been rated as unhelpful by Slickdeals users
Joined Oct 2016
L2: Beginner
98 Posts
82 Reputation
02-04-2021 at 12:10 PM #389
Just want to get back and share with others who were waiting like me. I received my mail rebate today, yeah. I did the mail in rebate form instead of online, because online doesn't let do it due to the pick up date is out of the range. hope you guys will get your card soon.

This comment has been rated as unhelpful by Slickdeals users
Joined Dec 2008
L3: Novice
235 Posts
156 Reputation
02-04-2021 at 12:44 PM #390
For anyone that has mailed in their rebate and has not received their rebate (or cannot locate their rebate online with their name, phone number, etc,), I would suggest calling 833.761.6888. They were able to look up my tracking number so that I can check the status on https://www.blackhawkrebates.com/.../#/tracker.

I got this number from chatting on the website above.