Thanks to community member(s) couponhunter for finding this deal. 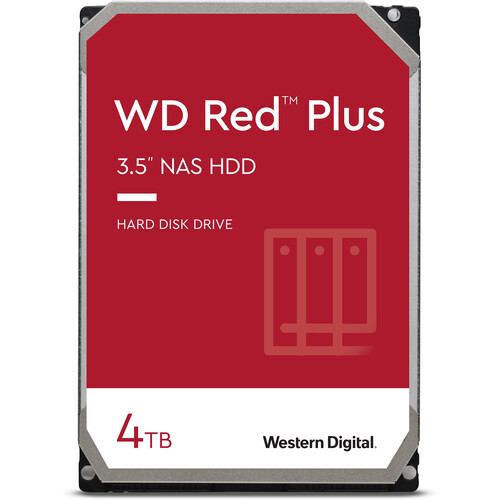 See Deal
Good deal?
You gave thanks to couponhunter for this post.
Thank you!

couponhunter posted this deal. Say thanks!

Good for those who do not want to spend $150+ on 6TB or larger size NAS drives. CMR technology and is being renamed "WD Red Plus" to distinguish it from the current "WD Red" product, which uses SMR technology.

0
Reply
This comment has been rated as unhelpful by Slickdeals users
Joined Jul 2014
L7: Teacher
2,491 Posts
676 Reputation
11-29-2020 at 12:11 AM #47
These will work like any other 5400 RPM drive, only they'll work better than some in multi-disk situations. Any drive can be used in RAID, but these have been tested and tweaked to work more optimally in RAID. As a standard drive, there isn't going to really be a difference between this and a WD Blue (CMR) for instance. In fact, I would be surprised if the wasn't the exact same drive as the WD Blue WD40EZRZ with slightly different firmware and a different sticker.

This reminds me of back to the day of Green VS Red drives, where WD Green were the cheapest they sold, and Red were the 2nd most expensive on the Consumer market. Black drives being the only non-enterprise drives they sold at the time that were more expensive than Red. Blues at the time were closer to Blacks in spec, but they certainly didn't have the performance or cache. Purples were another 5400RPM with modified firmware.

Hardware wise, Greens and Reds were almost identical. In fact, there were some External Drive models that would randomly have either drive model in them when shucked. WD even treated them interchangeably.

The firmware was the biggest (only?) difference, and it wasn't so much that Red had super-magical firmware that somehow made it a better drive, it was that Greens had firmware that hampered performance and literally shortened their lifespan because the heads would park way too frequently. This was such a controversy when discovered, WD discontinued the Green line altogether.

WHen you get a new HDD, download Seatools and run Short Generic and Long Generic tests on it after full-format, and before putting any data on it. If it fails any test, send it back to the retailer as DOA/defective within their return period. NEVER trust that a drive works perfectly out-of-the-box just because you can format and dump data on it, or else you might be very sad a few months later.

EDIT: Looking in to some of the reviews, I suspect these are likely used drives. If going the Used Drive route, you are much better off buying a more stable/robust model for around the same price or less.

fleabay has some 4TB HGST drives for around $50 used, I would trust those infinitely more than used generic Seagate drives. Perform the same tests I mentioned above of course (and for every platter drive you buy, for that matter)

From WD, a breakdown of which drives are SMR and which are CMR [westerndigital.com]

0
Reply
This comment has been rated as unhelpful by Slickdeals users
Joined Jan 2009
L5: Journeyman
536 Posts
26 Reputation
11-29-2020 at 06:05 AM #50
I actually didn't realize it was used and would rather get one new. Would the one described in this listing be better in that case?

0
Reply
This comment has been rated as unhelpful by Slickdeals users
Joined Jul 2008
Raju
354 Posts
26 Reputation
11-29-2020 at 10:39 AM #51
any body know how I can use two of these drives for automatic parallel storage..can we make NAS like something DIY in cheaper

0
Reply
This comment has been rated as unhelpful by Slickdeals users
Joined Jan 2014
New User
17 Posts
10 Reputation
11-29-2020 at 12:45 PM #52
CMR or SMR technology dont matter much if you dont have good backups. Yes, these work very well with TrueNAS and OpenMediaVault on Raspberry Pi's. I use both NAS's built from scratch, no issues so far. Family of 4 write/read in and out daily with multiple FireTV sticks accessing them for videos and Plex....All the best with your DIY NAS builds.

Although the cheapest TB/$ ratio are the 12TB if I recall correctly, its usually wise to buy the largest drive you can afford within reason because my drives always become obsolete size wise long before they actually break. The 14TB drives I've seen selling quite often recently for $190. If you wanted smaller drives, I'd usually just get some used ones because there are people like me that sell perfectly reliable 6TB and 8TB drives just because they are too small.

0
Reply
This comment has been rated as unhelpful by Slickdeals users
Joined Dec 2016
New User
423 Posts
75 Reputation
11-29-2020 at 08:59 PM #58
You can build a Nas using an old pc as a base. Just attach drives to internal ports and set them up as a raid. The Nas portion is just the software controlling access to the disks.

Download a copy of xigmanas/nas4free or freenas. Can run on a Bootable usb stick or even a CD.

0
Reply
This comment has been rated as unhelpful by Slickdeals users
Joined Nov 2015
L2: Beginner
64 Posts
14 Reputation
11-29-2020 at 09:52 PM #59
Hi. Thanks for all the explanations. It helped. I was wondering why would someone but these over the HGST enterprise SATA drives that are cheaper new on eBay today. I ended up buying them, but wondering if I should cancel those and buy these instead.