Thanks to community member splinke for finding this deal.

Note, new HSN customers can get an Extra $20 Off by applying promo code HSN2021 during checkout. 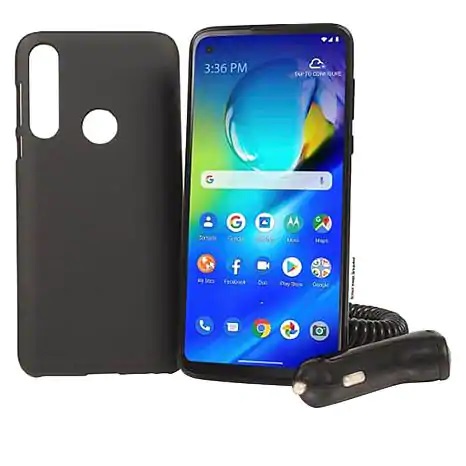 splinke posted this deal. Say thanks!


Add Comment
Reply
in Smartphones (5) Get HSN Coupons
If you purchase something through a post on our site, Slickdeals may get a small share of the sale.

Last Edited by HunterOne January 11, 2021 at 02:04 AM
This post can be edited by most users to provide up-to-date information about developments of this thread based on user responses, and user findings. Feel free to add, change or remove information shown here as it becomes available. This includes new coupons, rebates, ideas, thread summary, and similar items.

READ POST #86 on how to get a second year for FREE.
Link to this Wiki

I've had the phone for a few weeks, purchased from Amazon via the $100 unlocked phone service rebate from Tracfone. I've also used the previous-generation G7 power extensively. Here are my observations:


General navigation is relatively snappy. There's a hint of slowness - it's not lag, just the feeling that the phone is a half-step behind, likely from it's lower-tier Snapdragon 665. Keeping UI animations off in the Developer options helps.
Memory management on the 4GB of ram works well - not too aggressive, only ejects apps when many are running.
Display is good. Good viewing angles, sharp, bright enough for use in the sun.
Dual stereo speakers sound great, no noticeable distortion at full volume, definitely a step up from the single speaker of the G7 power.
Call quality is good, including on speakerphone
Wifi performance is a big improvement over the G7 power. The G has MIMO and conntects at 433 Mbps when standing in front of my Netgear X4S. I get 148 Mbps uploads via iPerf using WiFi Speed Test Pro [google.com]. The G7 doesn't have MIMO and maxes out at 150 Mbps, with effective transfer speeds randomly ranging from 25 Mbps to 65 Mbps.
Bluetooth is an improvement over the G7 power. The G7 would have audio dropouts whenever I handled the phone, such as taking it out of my pocket. Also the G7 is renown for the 2.4 Ghz WiFi slowing down considerably when Bluetooth was active (cross-talk on the antennas) - I don' see a noticeable drop in WiFi perf on the Moto G, as measured by iPerf, on either the 2.4Ghz or 5Ghz bands.
Cell reception is excellent, equivalent to an iPhone 12 I compared against, on both Verizon and T-Mobile networks
Battery life is insanely good, as expected. I'm a very heavy phone users and get nearly two full days between charges.
Moto actions are quite useful and even fun. Double-chop for flashlight is very handy, although it turns itself off after a given number of minutes to avoid battery drain in case you accidentally engage it. Wrist-turn to engage camera is useful as well.
Haven't used the cameras as much but so far they're been passable. I actually like the macro camera, even though many reviewers crap on it for having such low resolution. Offers some unique photo shooting, including shallow depth-of-field.
Rear fingerprint reader is placed perfectly and reads instantly and 100% of the time.
USB transfer performance over MTP is slow - took 28 minutes to transfer 15GB to a mounted SD card. It's much faster over ADB though - around 7 minutes for the same 15GB transfer.

Use the Brave Browser [google.com]. It's a source clone of Chrome but with an ad-blocker built-in, including ad blocking for YouTube videos. The killer feature is background video playback, which works with YouTube and even if you lock the phone. Allows you to listen to YouTube videos on the go without the battery drain of running the display and without worrying about inadvertent screen taps when locking the phone.
Enable the Accessibility Menu (Settings -> Accessibility -> Accessibility Menu). Gesture to open is two finger swipe from bottom of the phone (when using Gesture navigation rather than 3-button navigation). This gives you access to volume and screen locking without having to hit the physical buttons.
That's a pretty good find. Promo code HSN2021 gives new HSN accounts $20 off of the price.
if you buy and use these for emergency phones, like in the car, make sure you use them at least once every 30 days else after about 90 days they will suspend the phone per the T&C.

0
Reply
This comment has been rated as unhelpful by Slickdeals users
Joined Jun 2015
New User
1 Posts
10 Reputation
Our community has rated this post as helpful. If you agree, why not thank ?
01-08-2021 at 03:20 PM #6
This will be locked to them and usually require 1 year of service to get unlocked

1
Reply
This comment has been rated as unhelpful by Slickdeals users
Joined Jul 2008
L5: Journeyman
527 Posts
01-08-2021 at 04:21 PM #9
I bought the older Moto G7 last Sept for the same $90 price in link below. Less features but I use it only for emergency if I ever go out driving which is almost never now. I remember talking with their cust svc and asking them how long the price is good and if they have enough inventory. I was shocked when they said they have around 6,000 sets so I'm surprised they haven't lowered the price.

I later bought a unlocked Moto G8 Power mainly because of the bigger battery. No problems.

This comment has been rated as unhelpful by Slickdeals users
Joined Apr 2012
L4: Apprentice
329 Posts
30 Reputation
01-08-2021 at 04:56 PM #11
Unlocking with Tracfone is easy. You don't even need to call them! Go on website, enter your IMEI and instructions pop up