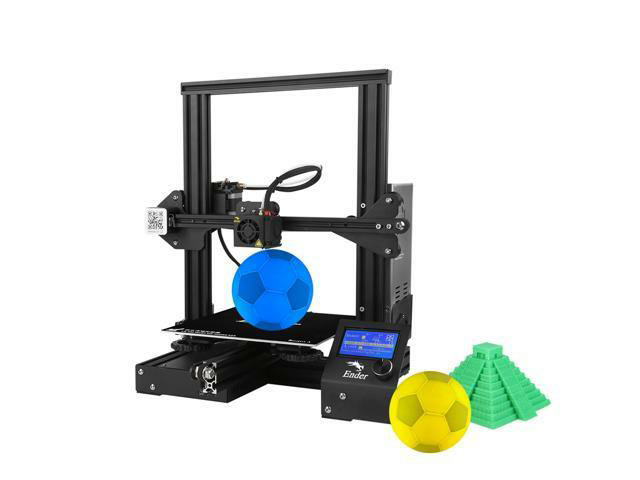 checkthat posted this deal. Say thanks!
Add Comment
Reply
in 3D Printers (5)
If you purchase something through a post on our site, Slickdeals may get a small share of the sale.

0
Reply
This comment has been rated as unhelpful by Slickdeals users
Joined May 2006
L4: Apprentice
448 Posts
159 Reputation
Original Poster

Pretty new to 3D printing but so far great results with my V2 (after some trial and error). Ender 3 V2 with BLTouch seems to be pretty hard to beat for a budget, upgradeable printer.

12
Reply
This comment has been rated as unhelpful by Slickdeals users
Joined Dec 2015
L2: Beginner
47 Posts
38 Reputation
Our community has rated this post as helpful. If you agree, why not thank ?
01-15-2021 at 02:09 PM #10
Adding in a comment i posted on a previous deal, for anyone considering this deal:

What the v2 has that the Ender 3 Pro does not:
-Glass bed (carborundum) in the box
-belt tensioners
-32 bit control board vs 16 bit on the pro
-power supply underneath instead of on the side
-built in toolbox

But the real question is, what's the value?
-The glass bed will run $20-30 on its own.
-Tensioners can be printed, but you'll need a box of 602 bearings to get 'em right. (~$10 a box)
-power supply can be moved in the Pro, but it's nice to already have it done, and without the need to print out parts to do it.
-honestly, I took the toolbox off and put a larger one in the same space, but hey: it's included out of the box.
-the 32-bit board is worth every damn penny over the E3 Pro. 16-bit boards require a LOT of hoops to update (most setups involve an arduino and a chip reader/writer program or software. I am not proficient enough to do all of that, nor do i have a desire to learn). 32-bit boards can just read an SD card with the update on it, and that's it. Additionally, the 32-bit board has better fan controls, so it doesn't always sound like you're standing on an airport runway next to a moving 747. Most importantly, upgrading the 16-bit board on the pro starts at around $40.

So, for the cost of an Ender 3 Pro, the bare-minimum upgrade would be AT LEAST updating the 16-bit board, which would bring a Pro up to around $230 - and that's without the glass bed, or all the other tweaks included in the v2.

Not a fanboy of my v2, i just recognize it's a hard value proposition to ignore.

As for additional parts, I would recommend grabbing a BLTouch - especially as it has native support for it. I also added an aluminum dual-gear extruder, but that's not at all essential, as the included extruder will last for at least a thousand hours, easily.

Hope that helps anyone in this thread!

0
Reply
This comment has been rated as unhelpful by Slickdeals users
Joined Jan 2009
L5: Journeyman
654 Posts
104 Reputation
Our community has rated this post as helpful. If you agree, why not thank ?
01-15-2021 at 03:53 PM #13
The ANTCLABS BLTouch is the original and official BLTouch, current version V3.1. There are a lot of knockoffs and if you look, are usually poorly rated and many say "3D Touch" on the plastic. The official BLTouch should run you around $38 as of now on Amazon. There are bundles with other accessories though that may or may not include the OEM BLTouch. I'd buy on Amazon from ANTCLABS or Creality to know you're getting a legit one.

Also unlike the Ender 3 V1 and Pro, you don't need to change voltage so the BLTouch plugs right into the board on the V2.

I just got my V2 a few weeks ago and am happy with it. It's my first 3D printer though so not much experience with others. Why aren't you a "fanboy" as you say? What don't you like about it? I've done some minor printed upgrades but main one was the BLTouch and yellow springs.

0
Reply
This comment has been rated as unhelpful by Slickdeals users
Joined Dec 2005
L3: Novice
203 Posts
55 Reputation
01-15-2021 at 04:10 PM #15
Same for me and I just did the same upgrades. What a night and day difference that BLTouch makes! I would previously sit at the table nervously waiting to see if it was going to work, but now I don't even think about it. Also did a raspberry pi with Octo print... HIGHLY recommended! Love my v2!