sr71
+30 Deal Score
20,077 Views
Newegg has Select Enermax All-in-one CPU Liquid Coolers on sale for prices from $29.99 after $20 rebate when you follow the instructions below. Shipping is free.

Thanks to community member sr71 for finding this deal. 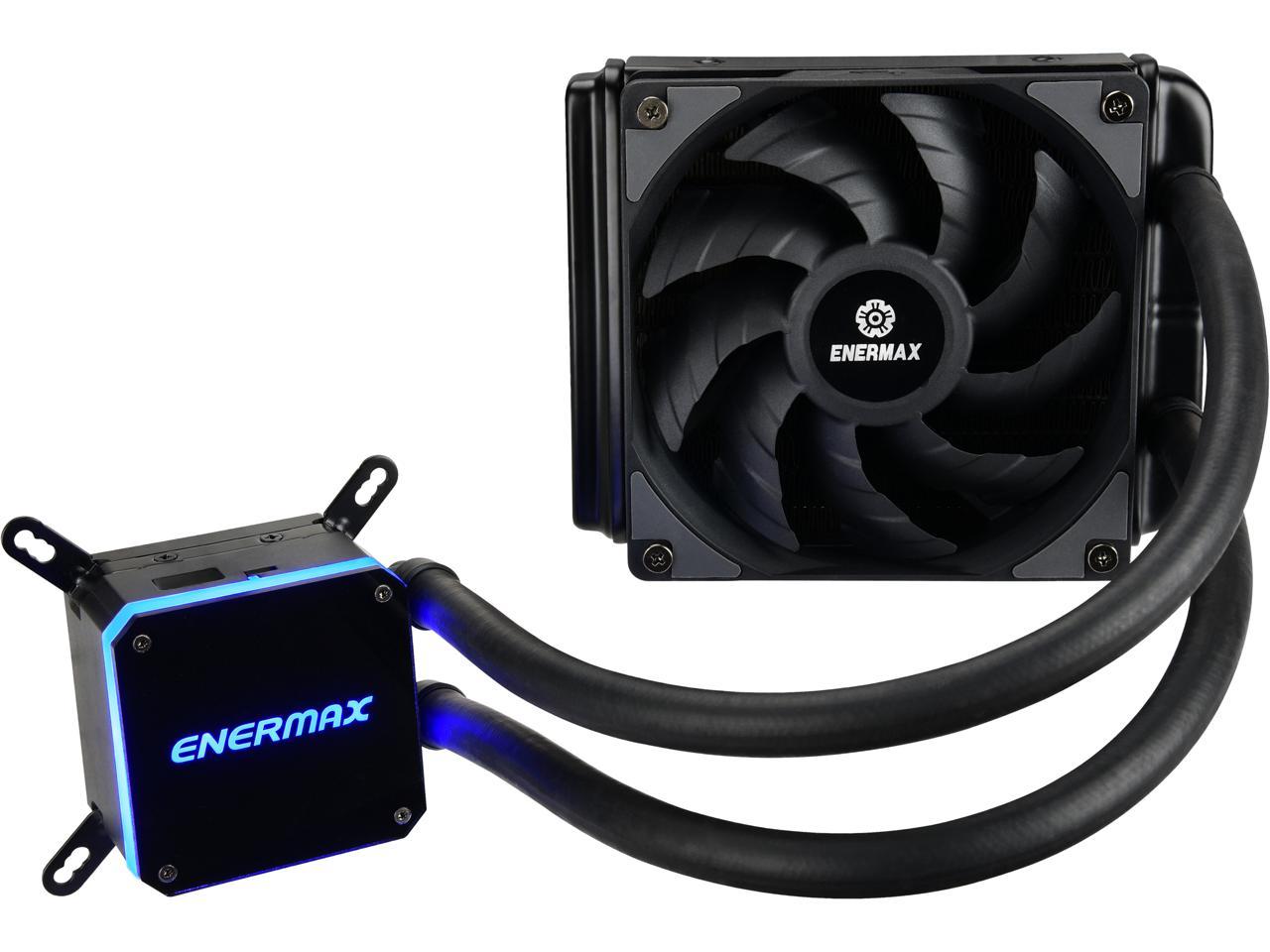 Add Comment
Reply
in Computer Fans & Coolers (8)
If you purchase something through a post on our site, Slickdeals may get a small share of the sale.

https://linustechtips.com/topic/8...tier-list/
Link to this Wiki

0
Reply
This comment has been rated as unhelpful by Slickdeals users
Joined Oct 2018
New User
6 Posts
10 Reputation
01-26-2021 at 05:09 AM #17
How much CPU can something like this handle? The linked product listing doesn't say anything about watts, power, or even BTUs. I don't see a list of approved CPUs anywhere, either.

The package thermals of my 4770k hit around 135w when running prime95 (max heat) with my liqmax ii, and coretemp reports avg of each core hitting the high 70s at lowest fan speed, and mid 60s at the highest fan speed.

Similar to othe AIOs, It won't win any awards for the best cooling of all time, but leaving it at the lowest speed, I don't hear a thing.

For $30 it's really a good deal and big upgrade from stock cooling - assuming there's no issues with the corrosion guys like gamers nexus found in the threadripper versions of these coolers. If you can fit the 240mm for $10 more though, probably a worthwhile upgrade especially if you have an overclocked or simply more hot CPU.

0
Reply
This comment has been rated as unhelpful by Slickdeals users
Joined Feb 2009
L1: Learner
22 Posts
14 Reputation
01-26-2021 at 07:30 AM #21
While that's true, if it leaks you can mess up your board and GPU. I had a from a different brand and my CPU throttled but the liquid ended up frying the board/GPU. That being said, I am still using an AIO cooler.

1
Reply
This comment has been rated as unhelpful by Slickdeals users
Joined Oct 2014
L100: We did it!
543 Posts
224 Reputation
01-26-2021 at 08:07 AM #22
FWIW, AIO coolers do not necessarily out perform standard fan/heat sink coolers. Theoretically they keep some of the heat out of your case.
I have an AIO, and my case looks sloppier (but has a bit of a Wow factor) and temps aren't any different.
Since you may use a larger fan, noise levels might go down. I did not audibly notice it to be any quieter.

On my next setup, I wouldn't get an AIO cooler.

Sure some heat sinks could work better than some smaller AIO coolers but I would want to know how you have yours setup. With a push/pull fan combo on an AIO cooler, there really shouldn't be a reason it would not out perform a normal fan/heat sink combo. I would also recommend upgrading the fans on the AIO cooler to a higher rated one to see if more air will help keep temps down.

0
Reply
Last edited by Fannatick January 26, 2021 at 11:28 AM. Reason: Grammar
This comment has been rated as unhelpful by Slickdeals users
Joined Sep 2012
L3: Novice
585 Posts
84 Reputation
01-26-2021 at 08:55 AM #25
Lots of misinformation here:
AIOs or water cooling is not magic. All coolers are limited by fin cooling area pretty much. Water coolers have the added benefit of higher thermal mass most of the time, but a large air-cooler with same mass and fin area, will have roughly the same perfromance.

At the end of the day, it is more practical to have a WC system with really large fin area (really big or multiple radiators) and multiple fans, simply because you can route them around the case instead of seating them just above the CPU, but most high-end air-coolers in the $90-150 with 2x120~140mm fans, have the performance 240mm AIOs have.

Now, both AIOs and PC WC pumps, just like air coolers and fans etc, have rpm control. If the pump or fans of the AIO doesn't run, the MoBo will know and warn you. If all goes south and the cooler - any cooler - doesn't work or doesn't work well enough, the CPU will heat up to its TD max and then throttle down to a lower power state, or shut off.

The only "risk" with WC is the chance there is a leak, and IF the is one, there MIGHT be damage to other parts. It is not a given that if there is one, things will burn or corrode or w/e.

No need to panic.

0
Reply
This comment has been rated as unhelpful by Slickdeals users
Joined Apr 2014
L4: Apprentice
473 Posts
68 Reputation
01-26-2021 at 04:34 PM #26
Most cases you mount the mobo vertically, so a leak wouldnt drip all over your hardware. Ive seen some wc disasters on datacenter servers, but as someone said in this thread, the fluid is usually not water, but a mineral that is not conductive and shouldnt cause corrosion. A real mess to clean maybe, but rubbing alcohol and some tlc and you'd be gtg if you did happen to have a leak on your gear

1
Reply
This comment has been rated as unhelpful by Slickdeals users
Joined Dec 2016
New User
3 Posts
10 Reputation
01-26-2021 at 06:49 PM #27
I'm actually aware of two different friends within the last five years whom both had AIOs leak, both being CoolerMaster products. The liquid landed on the GPU, which then ended up going into the PCI lane, and eventually dripped onto the PSU killing the PSU, GPU and the one PCI lane. I'd show pictures of one of the cases, but I don't believe SlickDeals allows that. I'm personally on the train who doesn't quite trust the AIOs, especially considering large air coolers perform the same.

0
Reply
This comment has been rated as unhelpful by Slickdeals users
Joined Aug 2013
L5: Journeyman
2,084 Posts
305 Reputation
01-27-2021 at 03:41 AM #28
Pretty sure Gamers Nexus, highly watched, highly regarded on YouTube, had at least one show about the leakage/corrosion of at least one Enermax aio models.

01-27-2021 at 12:23 PM #30
it would be able to shut down the computer and pump obviously if temps start rising
the liquid is supposed to be non-conductive so a small amount isn't fatal

Review: Dell's 34 Curved Video Conferencing Monitor Is a True Upgrade for Your Home Office
Copy Code & Open Site More Deals from
Did this coupon
work for you?
Copy
Link Copied to Clipboard