Thanks to community member dnorris68 for finding this deal. 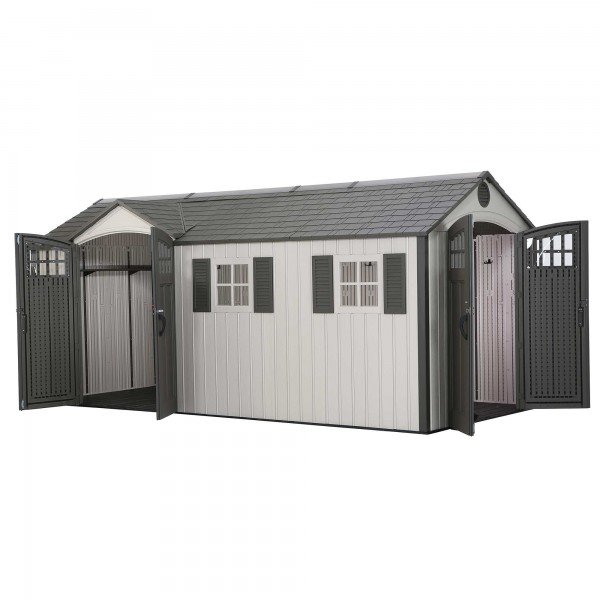 dnorris68 posted this deal. Say thanks!

I like many was on the fence about purchasing the last shed deal the 15x8 for 1599 and by the time I had decided it sold out. If you search Sam's clubs website it says sold out but when you click on the product and go to the individual page I was able to purchase it.

Description
Lifetime's 8-foot wide Outdoor Storage Sheds are the perfect solution to your storage needs. Built with durable, dual-wall high-density polyethylene, our sheds are steel reinforced and low maintenance. With various features including shatterproof windows, skylights, custom shelving and more, a Lifetime Shed is a perfect addition to your backyard.
​Please check your local HOA, zoning laws and site dimensions for shed use and installation requirements. Site prep and foundation are required but not included. See link below for more details.

Our local electrical inspector is a son of a bitch who will nitpick at anything he can find. He's even tried to get me on other stuff he wasn't inspecting which was grandfathered in. But something I hired a professional for - he didn't look at anything and just slapped the approval sticker on door of the house. Even more ridiculous - we had a big storm the day before the power was still out.

0
Reply
This comment has been rated as unhelpful by Slickdeals users
Joined Nov 2019
L2: Beginner
97 Posts
68 Reputation
03-04-2021 at 07:32 AM #67
I built a whole new house with out all the government bs they came by one day said when did you do that? I said last year they said you should of had a permit I said oh well its done now and they went on lol

Seriously though, what a silly rule.

0
Reply
This comment has been rated as unhelpful by Slickdeals users
Joined Sep 2015
L6: Expert
1,645 Posts
735 Reputation
03-04-2021 at 07:38 AM #70
What happened with mine is we used stepping stone ontop of dirt. We thought it was even but it shifted over time so the actual peaks of the roof separated from the walls and doors were of course difficult to open. If someone can afford it, I think paying to get slab work done or diy'ing is the best.. never have to worry about such things even if that slab gets a crack in it over time.

Enough with your communist propaganda, ever wondered why electricity/gas costs 2x or more where you live. Government sanctioned monopoly is the worst

I put in a smaller one of these (maybe half the size) a number of years ago that we use as a kids shed. I built a plinth out of treated lumber and painted with enamel, then once it was in place all I had to do was level 4 corners. Assembly is great when everything lines up! Ironically, this is basically how all smaller sheds are started, so at that point you have to ask yourself how much you are really saving by going plastic - HD/Lowes have some really inexpensive kit-type wooden sheds that are priced competitively even for JUST the lumber.

0
Reply
This comment has been rated as unhelpful by Slickdeals users
Joined Mar 2011
All That Nerdy Stuff
2,432 Posts
323 Reputation
03-04-2021 at 07:50 AM #73
Government decided people can by electricity off a single, approved list of vendors. That's regulation creating an oligopoly (oligarchy is different). That approved list is a regulation. That same government then mandates that those companies MUST buy electricity from certain wholesale vendors who are outside the state, which is also a regulation. Texas can't control what happens in other states or in markets, so when a crazy scenario like this happens, the poor companies have no choice but to buy and resell electricity at high prices.

All of that is regulation in action. The next steps (already in progress) are laws saying people don't have to pay the placement rates, power companies filing for bankruptcy, yet also starting in business until the state or federal governments cough up funds for a bailout. The power companies are then off the hook, the power generators out of state get fat money, and the citizens believe their politicians saved them, giving them effectively free electricity for the emergency. In reality, they'll still pay for that electricity, in the form of taxes, at the inflated price.

This is *not* a free market.

1
Reply
This comment has been rated as unhelpful by Slickdeals users
Joined Mar 2011
All That Nerdy Stuff
2,432 Posts
323 Reputation
03-04-2021 at 07:54 AM #74
The whole country is dogged with legally enforced monopolies and oligopolies masquerading as "deregulated", actually. It's not just California. Up until 2015, we still had legal cartels that forcefully seized various crops, including raisins and cherries, and destroyed them in order to reduce supply and Artificially raise prices. That was an artifact of Roosevelt's New Deal, which created many such schemes because Roosevelt believed the problem was that prices were too *low*.

The New Deal was the single biggest act of cronyism ever committed in the US to date.