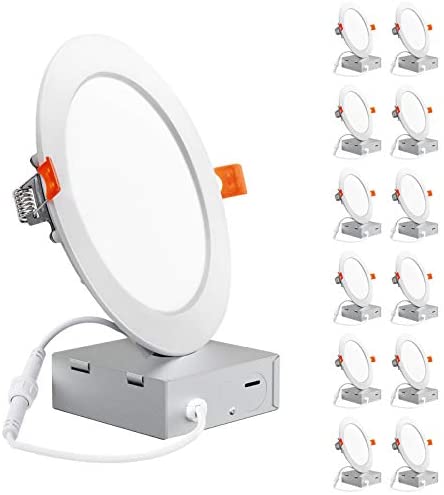 kelliet32 posted this deal. Say thanks!
Add Comment
Reply
Created 05-07-2021 at 06:44 PM by kelliet32
in Home & Home Improvement
If you purchase something through a post on our site, Slickdeals may get a small share of the sale.
Deal
Score +5
2,347 Views
$61.59
See Deal
About the OP
Send Message
Joined Nov 2018 L1: Learner
38 Reputation Points
0 Deals Posted
0 Votes Submitted
10 Comments Posted
Don't have Amazon Prime? Students can get a free 6-Month Amazon Prime trial with free 2-day shipping, unlimited video streaming & more. If you're not a student, there's also a free 1-Month Amazon Prime trial available.

i just spent ~$150 on nine Halo brand (that have color selection built in) so this is a steal if they are quality.

anyone used dimmers on these with luck?

0
Reply
This comment has been rated as unhelpful by Slickdeals users
Joined Sep 2009
L4: Apprentice
303 Posts
126 Reputation
05-12-2021 at 06:54 AM #6
Just FYI these are rated at 80 CRI which is pretty low. Probably fine for basement or utility but I would probably look for something with a higher CRI for living spaces so that the colors look more natural.

I did a bit of research on wafer lights like these a few months ago before purchasing and noticed that a lot of brands which were highly rated had poor recent ratings due to a change in manufacture. The light is a led strip bent into a circle aiming at the center of the wafer light. The back of the led strip is the bezel frame. Led is very vulnerable to heat and the case is basically the heat sink for the LED strip. The good ratings were from when the bezel and frame were made of aluminum. After production changed to plastic the problems reported were that the spring clips would break easily off the plastic mount and that the LED would fail. The plastic does not conduct heat away from the LED and this contributed to the LED failing, yellowing and cracking of the lens/diffuser and melting of the wafer light. These issue happened within 6 months of install.

So, my recommendations are:
Make sure the body/bezel of the light is metal not plastic for proper heat dissipation.
Avoid plastic junction box.
Get better CRI for living spaces where color matters.
Get higher lumen/watt than you think you might need as you can always dim which will also prolong the life of the LED.
Placement is important, do a little research on how far apart and how far from the wall to place the lighs Not going to get into that here...
Get a lutron caseta dimmer to control the lights. You can set trim for the highest setting, lowest setting and custom % dimm. You can also install a pico wirless remote anywhere offering 3, 4 or 5 way switching. If you get the pico to leave on a table, get the weighted mount. Well worth it.
Consider getting switchable color temp lights. You can then set your color. You might think 5k is what you want but may tone it down to 4k for a living room and this will offer flexibility.The way this is achieved is by having two sets of led lights in the wafer, yellow and white and a controller pulses power to each to make a blend of light. Some are controlled with a switch 5k 4k 3k on the junction box. Others are wifi controllable to any color temp between 5 and 3k.
Buy spare lights. These designs keep changing so if one fails you want to be able to swap out that light without having to change all the lights to match. If you are buying lutron or other name brand you can buy another one later but if you are buying Something on Amazon it wont be available or the same 6 months from now. It's not just the appearance of the bezel. LED temp/color and brightness will be different
Get yourself a dustbowl to cut the holes. I drilled a house without one and it was an utter mess. This time I used the dustbowl and did not even have to dust the furniture under where I was drilling. To make the dustbowl last a little longer recommend using an appropriately sized washer between the drill and the dustbowl to protect the dustbowl gromet as you drill. Also, wait 20 seconds after you punch through for the dust to settle before removing the dustbowl from the ceiling. holesaw > dustbowl > washer > drill. The dustbowl collapses as you push the drill against the ceiling sealing the dustbowl to the ceiling. It works great. Amazon sells it and you can also get from HD and others.
https://www.amazon.com/gp/product...UTF8&psc=1
One of the really great things about wafer lights is that they are the thickness of the drywall or plaster in your ceiling so you can even install them where you may have a joist. As long as you have a little hole on either side of the joist for the clip to slip in it will fit. You do need to put the junction box in the ceiling but you could install that from inside the attic if it does not fit through the hole past the joist.

(Chicago only) Google, ecobee, Honeywell, and Emerson smart thermostats for $1-$49 plus taxes, shipping and handling
6  •  3

WFH In Style for Under $50 With This Computer Desk