Slickdeals Forums Deal Talk Molecules: The Elements and the Architecture of Everything (Science eBook) $1
Advanced Search
Sorry, this deal has expired. Get notified of deals like this in the future. Add Deal Alert for this Item
Frontpage Deal

Molecules: The Elements and the Architecture of Everything (Science eBook) EXPIRED

megakimcheelove
+64 Deal Score
22,240 Views
Various retailers have Molecules: The Elements and the Architecture of Everything (Science eBook) by Theodore Gray for $0.99.

Thanks to Deal Editor megakimcheelove for finding this deal. 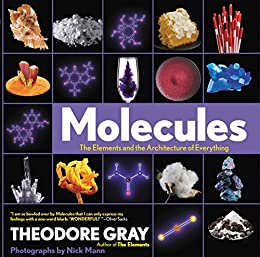 Written by Edited May 12, 2021 at 08:52 AM by
Amazon Kindle, Google Play, B&N Nook, Apple Books and Kobo have the eBook edition of Molecules: The Elements and the Architecture of Everything by Theodore Gray for $0.99

In his highly anticipated sequel to The Elements, Theodore Gray demonstrates how the elements of the periodic table combine to form the molecules that make up our world.

Everything physical is made up of the elements and the infinite variety of molecules they form when they combine with each other. In Molecules, Theodore Gray takes the next step in the grand story that began with the periodic table in his best-selling book, The Elements: A Visual Exploration of Every Known Atom in the Universe. Here, he explores through fascinating stories and trademark stunning photography the most interesting, essential, useful, and beautiful of the millions of chemical structures that make up every material in the world.

Gray begins with an explanation of how atoms bond to form molecules and compounds, as well as the difference between organic and inorganic chemistry. He then goes on to explore the vast array of materials molecules can create, including: soaps and solvents; goops and oils; rocks and ores; ropes and fibers; painkillers and dangerous drugs; sweeteners; perfumes and stink bombs; colors and pigments; and controversial compounds including asbestos, CFCs, and thimerosal.

Big, gorgeous photographs, as well as diagrams of the compounds and their chemical bonds, rendered with never before seen beauty, fill the pages and capture molecules in their various states.

As he did in The Elements, Gray shows us molecules as we've never seen them before. It's the perfect book for his loyal fans who've been eager for more and for anyone fascinated with the mysteries of the material world.

Pink Floyd All the Songs: The Story Behind Every Track (eBook) $4.99 via Various Digital Retailers
$4.99
7 0
Frontpage Deal

Given kids have to go through so much online these days with virtual schooling, I wish this was for a regular paperback book.

0
Reply
This comment has been rated as unhelpful by Slickdeals users
Joined Oct 2007
L6: Expert
1,177 Posts
188 Reputation
05-12-2021 at 05:26 PM #5
Given kids have to go through so much online these days with virtual schooling, I wish this was for a regular paperback book.

2
Reply
This comment has been rated as unhelpful by Slickdeals users
Joined Jul 2007
L5: Journeyman
682 Posts
133 Reputation
05-12-2021 at 06:19 PM #6
This is a photo heavy book better for the full color tablets. Wasn't immediately clear and amazon isn't letting me show just kindle edition reviews. No keyword hits for kindle either so maybe it hasn't been reviewed there.Sounds like it was intended more as a coffee table book. Might get it for a buck anyway and click through on PC.

1
Reply
This comment has been rated as unhelpful by Slickdeals users
Joined Mar 2014
L3: Novice
141 Posts
26 Reputation
05-12-2021 at 06:32 PM #8
This is a fantastic book. You'll miss the hundreds of beautiful glossy photos wit the kindle edition but if you have any interest in science or chemistry it's easily worth the $1.

I have a Chromecast with GoogleTV (CCwGTV), and if there were some way to throw/cast this up onto the big screen... well, I dunno, that might be cool/interesting/useful.

Why These Giant Outdoor Games Will Complete Your Summer

Amazon Sidewalk is Using Your Wi-Fi to Build Smart Neighborhoods
Copy Code & Open Site More Deals from
Did this coupon
work for you?
Copy
Link Copied to Clipboard