Slickdeals Forums Deal Talk Wera - 5347777001 Kraftform Plus 160i/168i/6 Insulated Professional Screwdriver Set, 6-Piece $29.75 at Amazon
Advanced Search
Sorry, this deal has expired. Get notified of deals like this in the future. Add Deal Alert for this Item
Frontpage Deal

Thanks to community member steve501 for finding this deal.
Features: 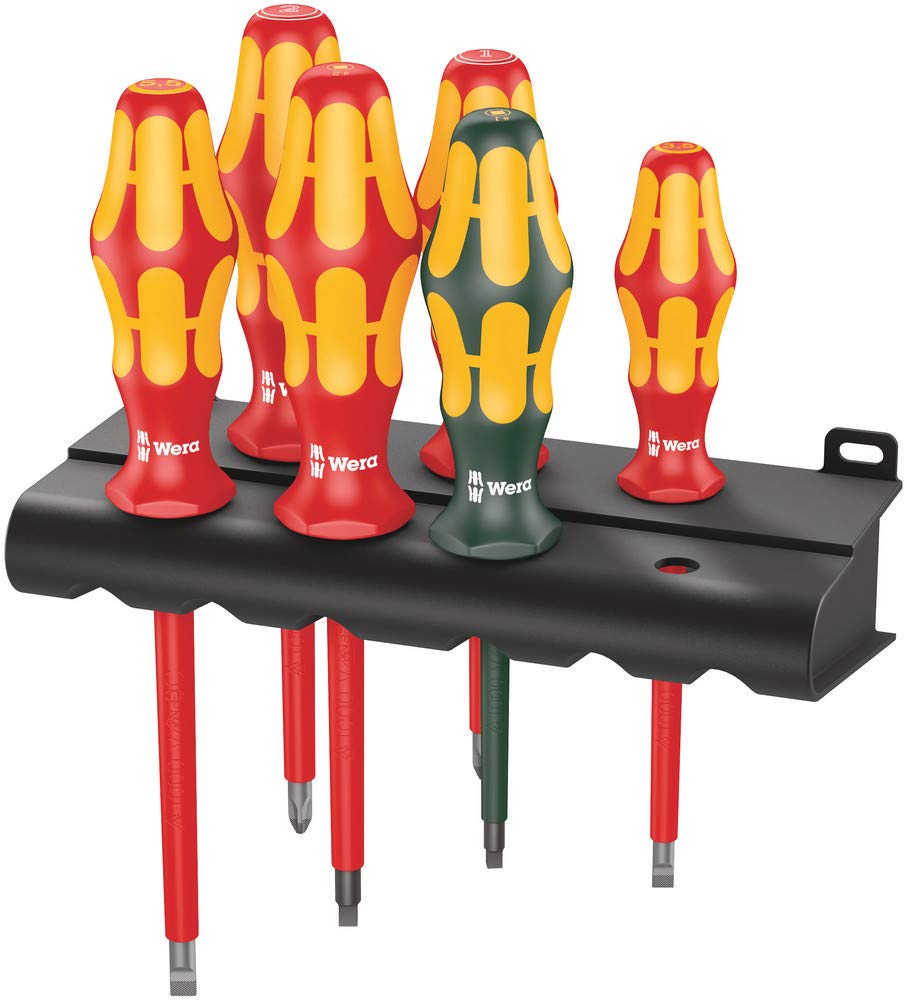 steve501 posted this deal. Say thanks!

These are made in the Chech Republic, not China. It is a German company and German engineering. While it can be argued, these are some of the best insulated screwdrivers on the market.​
I see the confusion. These are made by Wera, not Wiha (as you were referring to in your reply). While they are both German, they are different companies.
Enough about China, this set is from Czechia (and only the SQ1 is supposed to be green)

Country of Origin:
🇨🇿 Made in Czech Republic

Someone in China manufacturing must have misread the 'German engineering' specs. Then again, even the color scheme is Chinese.

Probably fine for the homeowner that is unlikely to play with anything over 240volts, but selling Chinese quality at German quality prices is not going to last much longer.

24
Reply
This comment has been rated as unhelpful by Slickdeals users
Joined Nov 2006
L10: Grand Master
13,948 Posts
2,761 Reputation
Our community has rated this post as helpful. If you agree, why not thank ?
05-13-2021 at 03:47 PM #4
same PN 5347777001 on other sites is green for both square drives (like here at Tool Discounter) [tooldiscounter.com]... wonder if it's Amazon being a turd and getting their own garbage made or something else going on.
either way absolutely hate Amazon these days... it's a real shitshow.

then, to add... question on Amazon says they were all red???
"
Question: On the package I've received, the #1 Square is red color rather than green as shown in the picture. Why?
Answer: Square/Robertson head screwdrivers are color coded. #1 should be green. Red is reserved for the #2 size. If the screwdriver is sized correctly and the handle is stamped correctly, this is likely an error that occurred in the manufacturing process.
"

05-13-2021 at 04:16 PM
Best guess is probably the wonderful quality control.... you get what you get. I see different designs and colors for the same Wera item that increasingly, the trades are even questioning what they are doing... or not doing. But, the price is dropping as people realize this is not German manufacturing.

If I am going to trust a tool with a 1,000 volts, it is going to be with a US manufacture where there is recourse for failure.

"Only with the governments and for profit healthcare, including our own, and China manufacturing are the majority of people expendable for profits." -unknown

13
Reply
This comment has been rated as unhelpful by Slickdeals users
Joined Jun 2008
L4: Apprentice
492 Posts
1,305 Reputation
Original Poster
Pro
Expert
05-13-2021 at 04:21 PM #6
These are made in the Chech Republic, not China. It is a German company and German engineering. While it can be argued, these are some of the best insulated screwdrivers on the market.​

05-13-2021 at 04:42 PM
No, these were 'some of the best insulated screwdrivers on the market' with the price steadily dropping. And the real issue was that it had to be uncovered, beginning with German employees, that Wiha had outsourced.... they did not publish it and can only presume the same future deceit with other items. It is prudent to just buy elsewhere... especially when your life depends on it.

You can buy them, while others and I will buy known quality.... with available recourse when not.

17
Reply
This comment has been rated as unhelpful by Slickdeals users
Joined Jun 2008
L4: Apprentice
492 Posts
1,305 Reputation
Original Poster
Pro
Expert
05-13-2021 at 04:46 PM #8
I see the confusion. These are made by Wera, not Wiha (as you were referring to in your reply). While they are both German, they are different companies.

0
Reply
This comment has been rated as unhelpful by Slickdeals users
Joined Nov 2019
L3: Novice
131 Posts
58 Reputation
05-13-2021 at 04:54 PM #9
Unless it has changed in the last few months, none of Wera's product line is made in China. Nearly all of their product line is made in the Czech Republic, with some of the really high end stuff maybe still made in Germany. All the Wera tools I have are made in the Czech Republic and the quality is fantastic.

Trust me, if they were charging German prices for German engineering and German production, you'd know it because the price tag would not be $30 for 6 screw drivers. Except Felo of course, which are easily my favorite screwdrivers (wood handled) and actually are made in Germany and you can get a set of 5 for $20. Nearly all of my Wiha screwdrivers are also made in Germany. The quality difference between Wiha and Wera is not noticeable.

05-13-2021 at 06:24 PM
Quite honestly, Steve, I think they are coming out of the same outsourced factories.... with a little different pattern, but similar colors. Neither are manufactured in Germany, where some say Chech and some say China for both brands from past and recent purchases by several tradesmen. Knock offs? Maybe, but the quality flip flops back and forth, where Wiha tips outlasted Wera and then Wera tips outlasted Wiha to the point they are both kind of substandard when used daily.... nothing like they were.

It has been an ongoing topic on job sites until someone pulls out their insulated Klein's that prior, did not have the best tips, but today, are as good as any. I suppose it is similar to Apex bits made in the USA that were and still are the very best for tip longevity, but they also manufacture bits all over the world under the same specs that are very much less than.

So yes, where manufactured matters... outsourced manufacturing has always reduced quality from the original. And when it comes to insulation properties, try getting recourse from an import for failure.

05-13-2021 at 06:39 PM
You said it.... $30 for six of these and expecting German manufactured quality is beyond ludicrous. Sit tight and the price for all outsourced from Germany will continue to drop... just the same as outsourced from the USA that also reduced the quality for the same name brands did. Initially, like Sears did with Craftsman, they do sell for the same price for short term profits, but all have steadily dropped after users realize the quality also dropped.


Country of Origin:
🇨🇿 Made in Czech Republic

1
Reply
This comment has been rated as unhelpful by Slickdeals users
Joined Nov 2019
L3: Novice
131 Posts
58 Reputation
Our community has rated this post as helpful. If you agree, why not thank ?
05-13-2021 at 11:02 PM #13
Having an extensive collection of tools both made in Germany and """German engineered""" but made in the Czech Republic, it is unlikely you'd ever notice the difference. My Czech made, German engineered Weras are as good as any of my German made, German engineered Wiha tools. The Czech Republic/Slovakia (Czechoslovakia) has an extensive engineering and manufacturing history and I wouldn't hesitate to buy a tool made there as long as it was from a reputable company.

You have to understand that these factories are dealing with the same machining, the same metal, the same base materials and the same blueprints and files as any other factory, whether that factory is in Germany, the Czech Republic or in China. The difference is the factory in Germany has laws and quality of life expectations for its employees that have to be paid for and that cost goes to us, the consumer. China has no such labor protection. That doesn't mean the German designed tool made in China is worse than the German designed tool made in Germany, it just means it is cheaper because the guy putting the pieces together is getting paid 10 yuan ($1.50 USD) an hour and not 10 Euros ($12 USD) an hour. Taxes and tariffs can be a hell of a thing.

The country of origin really doesn't matter much these days. It could be Germany, it could be the Czech Republic, it could be Japan, it could be China. With a simple tool like a screwdriver, as long as you're buying from a reputable company, the product is going to be solid. I've been to China, I've seen how the sausage is made in that country and as long as they're doing the manufacturing for a reputable company that actually gives a damn about its name, it'll be fine. If it is just cheap Chinesium garbage for a no name company, of course it'll suck but even with a company like Makita, outsourcing to China would never give me even a second of pause because I trust Makita as a company. It is all about context.

I am lucky enough to have seen industrial manufacturing all over the world and very rarely have I encountered a situation where I've thought "this is just garbage quality", even in China. All things being equal would I prefer a made in the US, made in Germany, made in Japan tool? Yes. Of course. But in reality, things aren't equal and I have a shop full of Chinese made Makita tools that couldn't possibly be better to show for it.

Amazon - Discover: Get $10 back when you pay with cashback bonus